Ready for another Project::GrannySquare object? This one is a table runner, and with eighteen squares, it’s the largest project I’ve made so far.  My parents recently redecorated their living room / dining room, and so my mom and I worked together to choose colors and a design that coordinated nicely with the new paint and carpet colors. 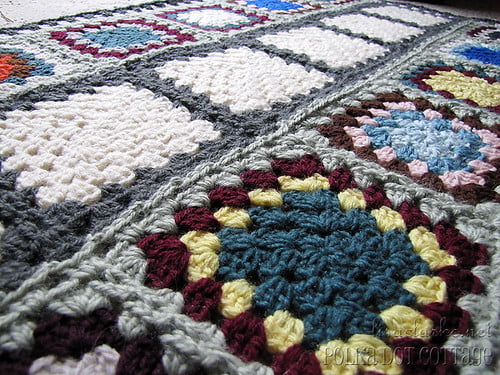 Step 1: Modify and/or supplement the squares

These squares were all the same size to start, and I had exactly the number I needed, so this step didn’t actually happen.

All I had to do was figure out how to arrange them, and for that I consulted with my mother.  (We made most of the design decisions together.)

I constructed this project differently than any of my previous ones.  I began with the center stripe, crocheting a row of gray around each square and connecting the squares as I went.  Then I crocheted another round of gray around the entire stripe.

Next was the bottom row, and I constructed this one in the same way, except I used a light green around the squares, and on the final pass around the entire stripe, I joined it to the center stripe as I went.

The top row was done in exactly the same manner.

The runner needed a border, and while I was originally going to just do two rounds of dark gray, it occurred to me that it would be nice to have something to coordinate with the off white from the center stripe.

I did one round of white, followed by a round of gray.  Then I blocked it, and that was it!

Now it lives happily on my parents’ dining room table.  At least until the cat decides he likes that spot for a cozy little nap…

As with the previous two projects, I joined the squares this way.

Next on the list?  A (very) small throw for my sister’s couch…