Christmas came this year and dealt a heavy blow to the spider population in my house.  You see, I have somewhat of a live-and-let-live policy when it comes to tiny critters, especially if they look relatively harmless, and the teeny tiny spiders that I sometimes see among the plants in the front window have never bothered me.

See how little they are?

Well, yesterday I was trying out my new Super Macro Lens Converter, and I was looking for tiny things to photograph.  Enter innocuous spider.

I was hoping for a ladybug, but at this time of year a tiny spider would have to do.  What would be the harm?

OMG.  I had no idea they were that fuzzy! And creepy! And ewwwwwww!

They look worse than the big spiders!

I am seriously rethinking my spider policy.  Kill-on-sight is sounding like a much better plan right about now…

So sorry. Would you prefer to rest your eyes on something sweeter? 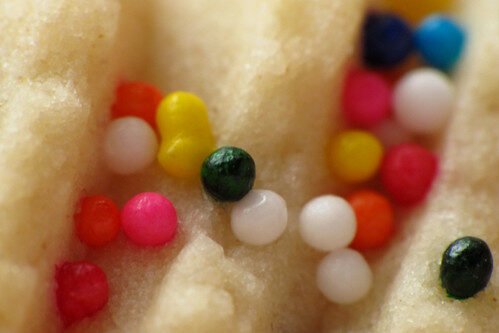 Is that better? This is an extreme close-up of a tree-shaped cookie press cookie with rainbow nonpareils on it.

Creepy spiders aside, this macro converter (a Raynox DCR 250) is a seriously cool toy. I snap it onto my advanced point-and-shoot, extend the lens to telephoto position, and voila! I’ve got access to incredibly teeny tiny things.  It’s like sticking a magnifying glass to the front of your lens.  The depth of field with this thing is incredibly narrow, and I love it – super narrow dof is something my friends with DSLRs seem to be able to get very easily, but I’ve often had to do some post-processing tweaking to get the look I wanted for my own photos.  This thing is just super cool.

It’s a great option for those of us who have cameras with fixed lenses.

It took me a while to figure out how to use it.  For instance, even though you are zoomed out at maximum, you’re not supposed to be focusing on something far away.  You actually need to be within a foot or so of your subject.  It took me a day and a half to figure that one out.

This is a key on my turn-of-the-20th-century Underwood typewriter.  I actually zoomed back out a bit, otherwise the entire frame would have been taken up with just the word “SHIFT.”

When taking this kind of shot, a tabletop tripod comes in handy, because you need a very steady hand when dealing with such a small area of sharp focus.  I have a crummy tabletop tripod I’ve been using, but it’s more trouble than it’s worth, and I have my eye on this nifty Gorillapod.

I have renewed enthusiasm for a 2011 365 project.  I’m almost certain I will be going with an “up close and personal” theme, and spend the year getting to know the little details of everyday life.   Not all of the close-ups will be as extreme as these, but I think they’ll all be fun. (and no more spiders!)

26 thoughts on “A blow to the spiders”