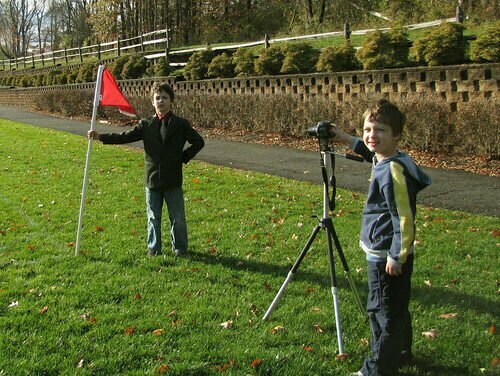 Actually, it was Friday, but had I called this post “Friday in the Park,” I’d have missed the opportunity to get a catchy 70’s tune stuck in your head.  You’re welcome.

So, my kids have been on a real video-making kick for the last few weeks.  It’s probably my fault for lending them my old (busted zoom) camera and the tripod.  Their video habit was a lot more manageable when they were using their flips and editing the results on their own computers (or skipping the editing altogether and just plugging into the tv to watch straight off of the camera.)

But see, I went and downloaded a trial version of Video Studio Pro last week, and I made the mistake of showing them what I could do with it.  Which is a lot.

So now they are using my old camera & the tripod, and cranking out multi-scene videos at breakneck speed, and asking me to turn them into cohesive little adventures on my computer using the new software.  They sit beside me making the creative decisions, and I execute their commands.  Admittedly it was fun at first, and still is to some extent, but I really am spending an awful lot of time in video production lately, and I’m not even getting to pick the fonts, transitions, or background music. (Except for Eamonn’s Apple Pie series.  He’s letting me call all of the creative shots on the post-production end, since I have been so involved in helping him film the series.) 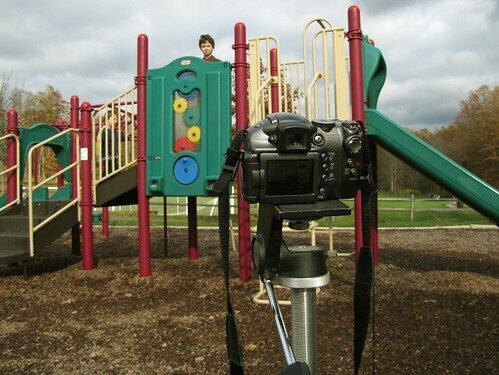 Anyway, we ended up at the park today, because Aidan had a vision for a new Boring Office Guy video that involved a playground, and I needed to go to the library anyway, which is right next door to the park.  Oh, brrrrr, was it chilly!  We filmed Aidan’s video, and then one for Eamonn, and then we took our thoroughly chilled selves home for some mint hot chocolate.

I have to say, despite being less than eager to go to the park in the first place, I had a fabulous afternoon.  I love dropping by the library, and I love hot chocolate after a chilly Fall adventure.  And I didn’t even mind following the kids around and being their cameraman.

I suppose I have some more video editing ahead of me – those exciting installments from the park are not going to produce themselves – but I’m going to put it off until tomorrow.  A little fire in the fireplace and some knitting on my lap will seal this day as a quintessential Autumn experience.

If you’d like to see some of the videos that Aidan and Eamonn make, you can visit their websites: Boring Office Guy and I am Flufy.  Most of what they do will probably appeal more to your kids than they will to you (particularly Flufy’s Ultraman videos), but every now and then there is a gem in there that a grown-up can enjoy.