So I wanted a sturdy but decent-looking tote with pockets that would allow me to carry around all of my Summer junk – camera, various gadgets, and the usual purse stuff.  I had a pile of these Polka Dot Creations tote bags in the basement, and I didn’t like using them because they had an outdated logo.  (I know, I know. Crazy.)  Still, they’re really nice heavy duty totes and it’s stupid of me to let them go to waste like that. 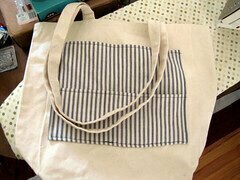 I covered up the front logo and the back logo with pockets.  The first pocket I made was more of a 3-pocket system – one large pocket with a shorter divided pocket on the outside of it.  I attempted to make the second large pocket for the other side be gusseted, or at least, expandable in some way.  It’s for my camera. 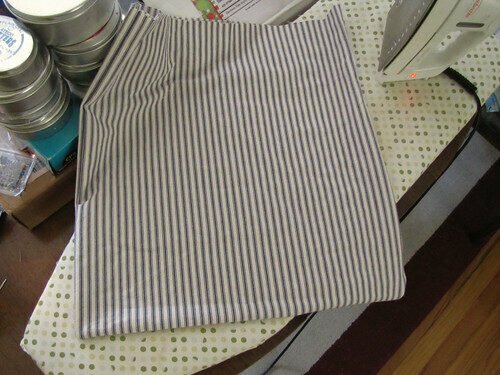 Here are the pockets.

And the self-made polymer button I added on for fun.  It’s not functional – there’s a snap underneath it that does the real work.  Pay no mind to the messy stitching – by the time I got to this section, I was more interested in finishing than in making it perfect…

I’ve been carrying around this bag for a week now, and I do like it, however I’ve got some notes for next time (and why shouldn’t there be a next time, if I’ve got so many of these tote bags in the basement doing nothing?):

Essentially, my biggest complaints are related to the pockets, but since big, functional, and numerous pockets were the whole point of this experiment, I can’t really ignore the fact that they don’t feel right to me.

Still, I like it.  And I particularly like that it’s not obvious where it came from (at least, until you look inside a pocket!).