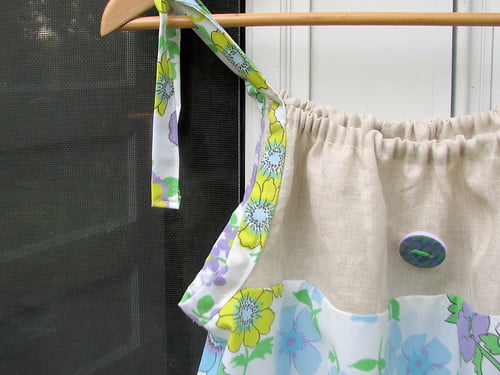 I’ve been thinking a lot about pillowcase dresses.  I’ve made two before, and enjoyed the process.  My main problem is not having all that many little girls in my life to give them to.  There’s always sewing for charity and for gifts, and I’ve done both, but there’s also the idea that maybe I could do something nice enough to go in my shop.

I gave that some thought over the last week or so, and came up with a design that involved a vintage pillowcase, natural linen, and a button.  (You know that I just can’t bring myself to sell something of my own creation unless it has a handcrafted button on it, don’t you?)  Yesterday I spent some time bringing my idea to life, referring now and then to one one of the dress projects in the Craft Challenge book, as a refresher on the basics of pillowcase dress construction.

I’m very pleased with the result!  Now what remains is to find some girls of various ages and sizes who are willing to try it on.  I have this feeling that it can grow with a child for many years, starting as a dress, and ending up as a shirt, but I don’t want to advertise that unless I have seen it with my own eyes.

I have six-year-old and nine-year-old boys easily at my disposal, but despite promising to chop their heads out of any photographs I might take of them, they have declined to try on the dress for me.  Boring Office Guy has gone so far as to proclaim himself too masculine to pull it off – “Even without my head, they’d know I was a boy, Mom – I just look like one.”

Heh.  I have a few friends who might be willing to model for me, if I ask them.  And maybe they can give me an honest opinion as to whether this is something a girl would even want to wear.  I’m feeling hopelessly out of touch on that count.  (Those of you who know some female children well are welcome to show them these pictures and share their opinions with me!) 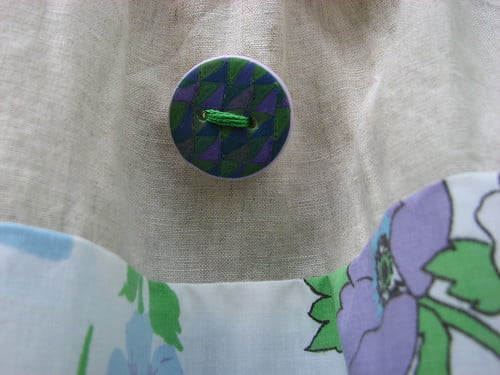 Anyway.  I’m getting an itch to make more buttons, and I’m also getting an itch to troll the thrift shop again.  What I need to do is combine these urges – go thrifting for beautiful pillowcases, make the buttons to go with them, and spend a few days cranking out a half dozen pillowcase dresses.  That would hit the spot nicely, I think!

13 thoughts on “All dressed up and noplace to go”