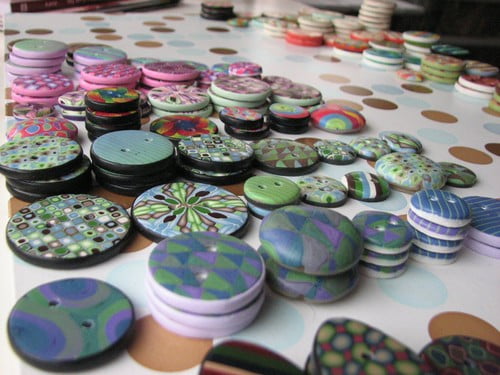 Saturday I sat down with my little bowl of buttons, and began to organize them by color and pattern.  There is something strangely appealing about this activity for me.  Seriously, I could probably re-arrange and re-organize them all day long and not get bored.

But then, I’m weird that way.

I had them out so that I could take inventory, update the quantities in the shop, and add some new styles.  I mention this here, because I suspect that many of you like my big focal buttons, but either lack the funds, or lack a project for a 1.25-inch button.  With that in mind, I’ve posted a selection of smaller, more economical button sets that you might like.

And now I am going to unplug for the night.  I’ve been very productive in the Real World today, which is great, but I’ve also spent every other spare moment online and it’s starting to bug me.