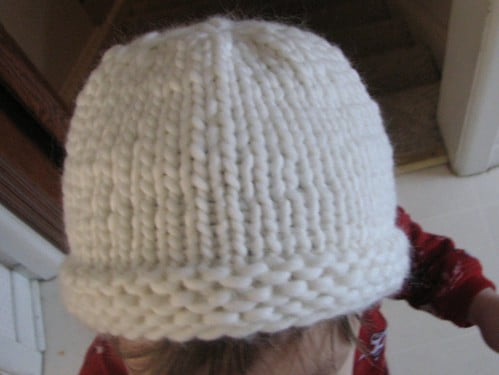 Have you seen Leslie Friend‘s new hat pattern?  It’s called Chunky Knit Beanie, and it seemed to me that it would be a very simple thing to adapt to the loom.  And since Eamonn needed a new hat, I gave it shot. Please forgive the photo – most pictures of Eamonn are a blur of activity and this is as still as I could get him to be.

Now, I tend to think that knitting looms are perfectly-suited to hat-making and as such, it should be a no-brainer to take a simple needle-knit pattern and turn it into a loom pattern.  And a pattern that calls for super bulky yarn and #15 needles is especially tempting for the Knifty Knitter type looms, for which “bulky” is a way of life.  Unfortunately, I didn’t find this as simple as I think it should have been, and maybe this is one case where using a loom just isn’t the best choice without some serious changes to the process.

If you want to give this project a try, let me just caution you about a few things that caused me trouble.  Your mileage may vary:

I’m not sure Eamonn will wear this hat.  It’s nearly too small, and just not comfortable.  I’m considering unraveling it, and re-knitting it on the 36-peg green Knifty Knitter.  I may have better luck keeping it loose and stretchy.  Also, I would just knit in the round, and skip the decreases altogether.  Binding off with the gather method in this case wouldn’t add much in the way of extra bulk. 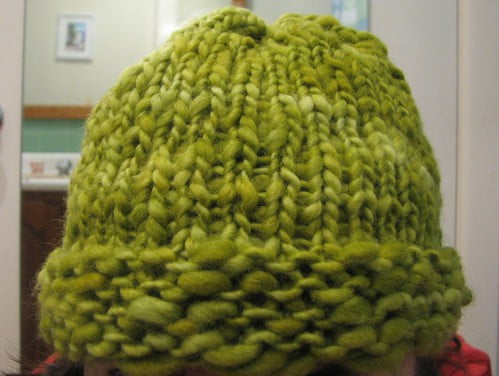 Making Eamonn’s hat gave me an idea for one of my own.  (as long as we’re being forgiving of bad photography around here today, please excuse this as well – it was dark, and the only decent lighting is in the bathroom, but even that isn’t fabulous.)  I knit this with the 41-peg yellow Knifty Knitter, and Malabrigo Gruesa, which is a really fun thick & thin yarn.  I used the same stitches as for Eamonn’s hat – garter stitch brim and stockinette body – but I did it in the round instead of a flat panel, and I just gathered it at the top to close it.  Easy peasy.  I did the whole thing while watching a movie with the kids last night.  And I love that the stitches are wonky-looking on purpose.

My only complaint about this is that it took the entire skein before I was ready to be done.  I like my hats a bit looser and would have knit for another inch or so if I could have.  On the bright side, this gives me a very neat idea…  But more on that sometime after I’ve developed my thoughts a bit further.

So, what have you made this weekend?