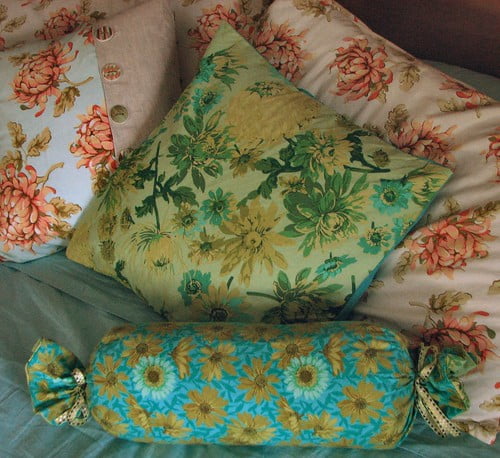 Despite the fact that I am home all day during the week, there’s something about the dawning of a bright, new Saturday that fills me with anticipation.  This Saturday has been breakfasting on the patio, cutting out fabric pieces on the family room floor, and whipping up three new pillows, all before I’d even hit the shower.

I tell you, these pillow covers are so easy, they’re addicting!  I’ve been pilfering ugly Wal-mart throw pillows from the family room and using them as my pillow forms.  And I love that these are really just covers that I’m making, which can easily be removed and laundered.  Easy to make, easy to replace at whim.  The two above feature Martha Negley prints from her Mums collection, which I found at Repro Depot last week.  I really love the square pillow (I put solid turquoise on the back) but I’m not sold on the roll pillow yet.  The ruffly ends are a little too “girly” for me.  I may be happier re-doing it with more of a “tailored” look, but that’s somewhat more complicated than this, and for now, it will stay as-is.

For both of these, I followed projects in Quick and Easy Slipcovers, and I really did find them to be quick and easy. 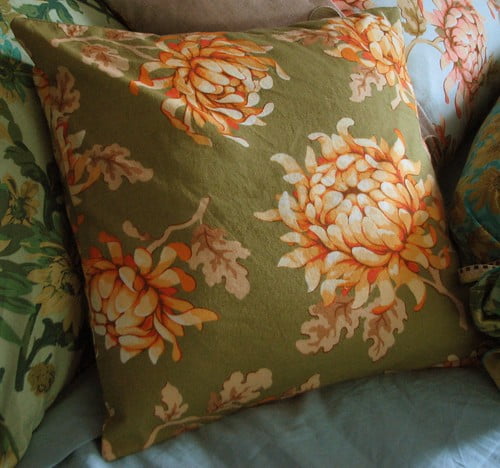 For this smaller square pillow I used yet another colorway of Heather Bailey‘s painted mum’s print.  Do you see a theme here?  I really didn’t intend for my bed to become Mum Central, and now I’m suddenly wishing I had some stripes in the mix.  Or at least some solids. 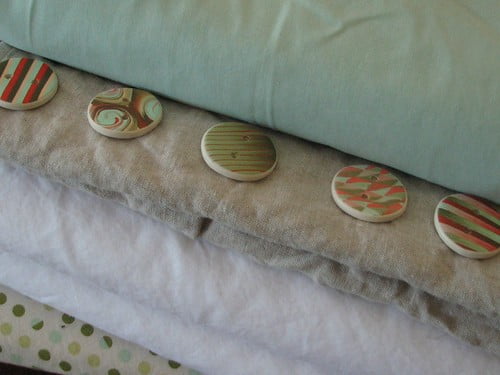 That actually brings me to my duvet cover plans.  I’ve been eying the duvet cover they have in Quick and Easy Slipcovers, and using that project as a springboard for my own ideas.  Originally, I thought I’d sew together two white sheets, make a linen “flap” on the top, and fasten it with some clay buttons.  But there was a problem. The Queen size sheets I bought are not as large as the Queen size comforter I want to insert inside, so I can’t use them as the front and back of the duvet cover without adding more material from somewhere.

After I realized that this morning, I hopped in the shower and went off to Target to buy another white sheet that I could cut up and use to extend the other two.  I never actually got to Target, because I took a detour to a farmer’s market first (JerseyFresh blueberries & peaches – mmmmm!), which took me past a thrift shop, which led me to that lovely aqua sheet you see on the top of the pile.  It’s King size, so it should fit the entire back of the cover (I haven’t measured it yet, but I’m hopeful).  This will give me pale aqua on the back, and the linen and white on the front that I wanted.  I think the little tiny bit of aqua peeking through at the edges will be very pretty, and it will be picked-up by the buttons. If I use them.  They may just make the whole thing too busy, so I’ll have to wait and see.

Speaking of “too busy” I’m feeling like my pillow shams were a bad idea.  They were fine until I started making more throw pillows.  Probably they should be white and linen like the duvet cover.  I’ll have to wait until I see the whole ensemble together and decide then.

Are you enjoying this little stream-of-consciousness brain dump here?  I know, your eyes glazed over three paragraphs ago.  It’s ok.  I’m used to that.  I live with a bunch of boys, remember?  I’ll just continue talking about pillows and bedspreads and pretty shades of blue and green, and just pretend that someone is still listening, like I usually do… 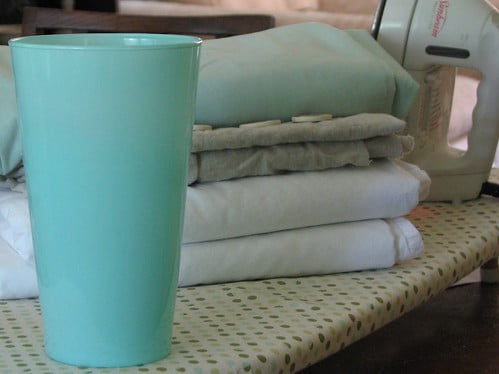 So, anyway, I also spied this glass vase at the thrift shop.  I don’t know if it’s anything special, but it has that vintagey, milky aqua aesthetic, (and it was only $1.40) which is precisely what I want.  I’ll have to find something pretty to put in it.  I’m suddenly reminded of pussy willows in a jug in my childhood living room.  Or were they in my grandparents’ living room?  I can’t remember (it was actually the same room, anyway – I grew up in the house my father grew up in.  We moved there when I was seven years old, after my grandparents retired to the Catskills).  Either way, pussy willows would look nice in that vase.

Ok, I think I’ve rambled on here enough tonight.  I promised Aidan a movie night, and we have to run out and pick one up before it gets too late.  And while I’m there, I have to try and avoid wandering to the next building over and succumbing to the temptation that is Starbucks Mint Mocha Chip.  Wish me luck.