Is there such a thing as Skirtmakers Anonymous? It’s not so much that I like wearing skirts (although, I definitely do). It’s more that I like wearing skirts that I made. Have you seen some of the new skirts that Target has this season? I love them! But I’ve been passing them by on the racks because I didn’t make them. I definitely have some kind of skirt-borne illness.

There are 32 skirts in that picture, all of them made by me or significantly altered from their original forms by me. Many began as designer quilting cotton, many as discarded bed linens, and still others began as skirts, but I dyed them or added images, beads, etc. If you click on the image, it’ll take you to flickr, where you can see my notes on all of them. 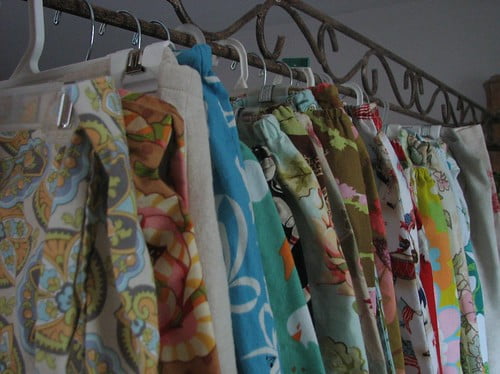 Of course, with all of the skirty goodness in my closet, I still wear the same three over, and over, and over again. There are even a few in here that I haven’t worn since I made them. I think I may cull the herd at some point and donate some of those unused ones to the local thrift shop. If I do that, there may still be some space in my closet, when I get around to making the rest of my Sheet Swap skirts and the two that I have been holding off on as weight loss reward skirts.  (My resolve is slipping on that weight loss thing.  I’m just about ready to cut into that fabric no matter what the dumb scale says.) 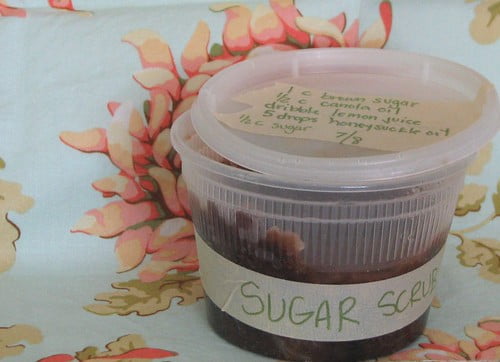 On another note… I’ve been reading Amy Karol’s blog with some interest lately, as she’s been talking about homemade cleansers.  I’m not ready to start washing my hair with baking soda just yet, but the sugar scrub she posted about sounded neat.   I whipped up a batch last night, washed my hands with it, and ewwww!  I felt like I had just been rolling around in an oil slick.  Blech.  It occurred to me that I might have thrown things off by using brown sugar instead of regular sugar, so I threw an extra half cup of regular sugar in there, and it is definitely an improvement.

I used it in the shower this morning, and although it still left me with a bit of an oily feeling, it wasn’t as bad.  Are any of you regular sugar scrub users?  Is that how it’s supposed to feel?  I love the idea of using a natural cleanser in the shower, but I have to say, when I think about washing my face with oil, I practically feel the pimples forming right then and there… 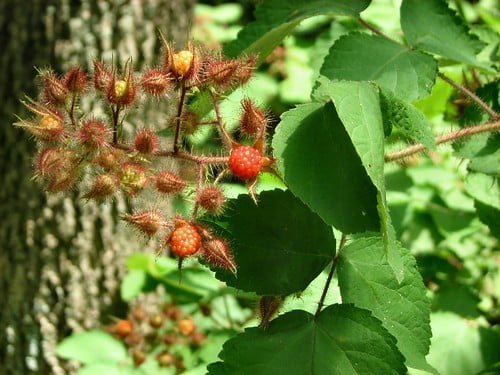 And on yet one more note… our wineberries are coming in!  I spotted them on the plant this afternoon, and am really looking forward to the opportunity to pick them.  Harvesting my own fruit from plants that grow in my own yard gives me a feeling that’s hard to explain.  Domestic?  Earthy-mama-esque?  Farm-girl-ish? I feel as if I should be wearing a long breezy skirt and a wildflower behind my left ear, collecting berries in my apron, and bringing them back to the farmhouse, across the creaky wide-plank wooden floor of my ample kitchen to turn them into a heavenly concoction -perhaps an old family recipe that is anticipated with glee each new berry season – that will have my children and husband swooning with the bursting fresh home-grown fruit goodness of it all.

I don’t have an ample farmhouse kitchen, and I’m also not so sure about the swooning family, but I think maybe I could make something they’d like.  Or just let them munch on the berries raw.  Yeah, this suburban mom and her linoleum-floored kitchen can handle either of those things sufficiently. 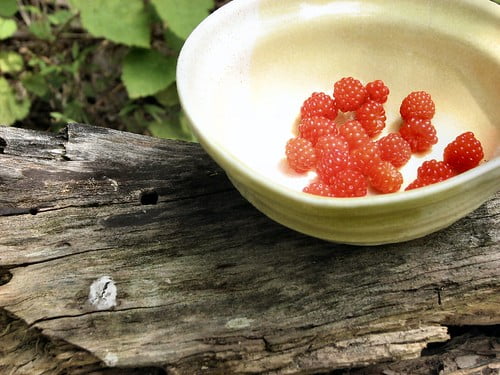 I did harvest a tiny little bunch today, but most of the berries are not yet a nice, deep red.  In a few more days, I’ll be able to fill up a big bowl like last year, and use them in all kinds of baked goodies.   With or without a wildflower behind my ear 🙂