Would you think less of me, if I were I quitter? 😉

See, the thing is, I had made this deal that I’d only make a new skirt for myself after I lost 5 pounds. It seemed a pretty reasonable goal back in January when it was too cold to really wear skirts and I was still feeling the warm glow of a new-and-successful diet. I lost that first five pounds quickly, made a fun Valentine’s Day skirt that I got to wear all of once, and then the diet kind of fizzled. I suppose I chose poorly when I chose a holiday-themed skirt as my prize. It’s like a non-prize, really. I have totally not gotten to enjoy it! I’m probably about 3 lbs away from my next skirt, and I’m not saying I’m giving up on losing any more weight, but I just can’t take all of the skirty inspiration I’m feeling now that the weather is warming up! 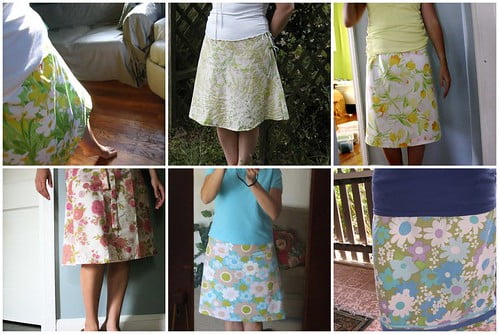 So, I’m quitting the deal. I’ve been wandering around flickr, eyeing all of the great skirts made with thrifted sheets like those above, and I really want to cut into the rest of my psychedelic sheet now and make it into a skirt. Maybe instead of completely quitting the deal, I should just ammend it. I won’t buy any new fabric to make a skirt until I lose the next 5 lbs; using what I have already would be fine. Yeah, I like that. 😀

So now I’m not a quitter – I’m a cheater, LOL! Not sure which is better, character-building-wise, but I know which is better wardrobe-wise! And getting-to-make-stuff-wise!