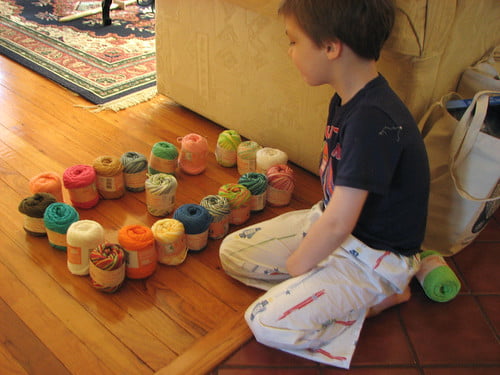 Yesterday I opened up a box of Peaches & Creme from Elmore-Pisgah.  Twenty-two little balls of totally affordable cotton worsted, in a plethora of pretty colors.  Now, I don’t know about you, but when I am presented a box full of like objects, my first impulse is to sort them.  So there I sat, on the floor, with my big box of yarn, looking for sets of three that were pleasing together.

I was soon joined (grudgingly at first, but enthusiastically before long) by my 6-year-old, who had his own ideas of what colors look good next to each other.  We sat there like that for several minutes – making matches, jumbling them up, re-ordering – when someone suggested bowling. 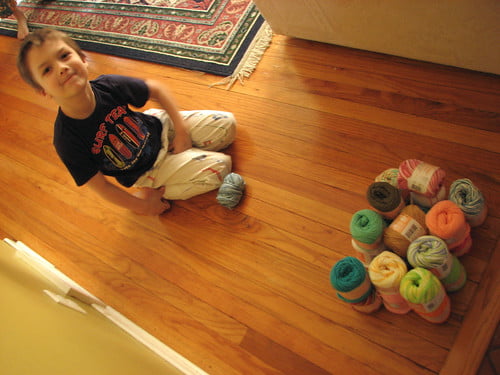 And thus began an hour-long series of build-them-up and knock-them-down games that were surprisingly enjoyable for both of us.  It actually felt like a real shame when I had to take away three of the balls to start my next dishcloth.

I love that kind of spontaneous fun that erupts from looking at a collection of objects in a non-traditional way.  It’s like the game of Go-Fish that my 9-year-old and I played the other day with a big bowl of my medium-size clay buttons.  “Do you have a button in the Triangles pattern?”  “Nope, go fish!”  Fun.

Before I go, a quick aside: have you heard about the Craft Hope shop at Etsy?  I have a full entry about this nearly ready to post, but in the meantime, I think the shop can speak for itself.  Go have a look!

2 thoughts on “What’s more fun than a box full of yarn?”