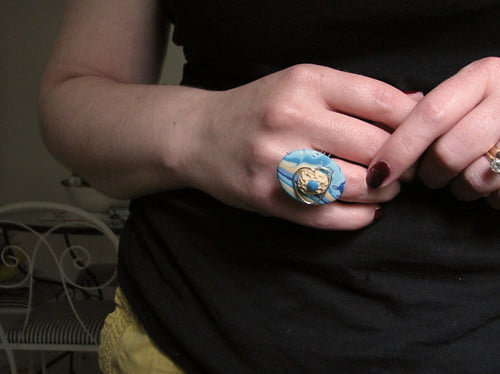 I promised a few days ago that I’d make somethingorother and show it to you.  I do feel like this blog is more interesting when I’m filling it with crafty things, but sometimes life gets in the way, or I’m just not having a lot of luck making things that I actually like…

I’ve been flipping through Ancient Modern a bit more, looking at the pictures, and solidifying my impressions of what might be the most appealing elements, to me, of Ronna’s work.  I still haven’t really been reading the text – that would make entirely too much sense, wouldn’t it?

I still have the scraps from my beach necklaces all over my work table, so I’ve been taking advantage of those in my experimentation.  The ring, above, was the first thing I tried, based on the Twice Told Story ring.  I didn’t have the ideal gauge of wire, nor did I actually read how to finish the ring.  Perhaps I should have, because I’m less than impressed. 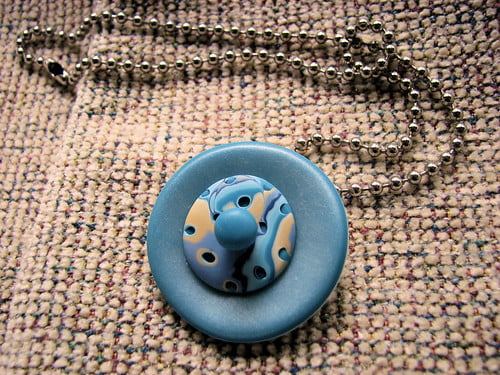 Next I made a necklace, inspired by all of the concentric circles throughout the book.  It, like the ring, doesn’t look in reality like it looked in my mind.  That’s too bad, because the version in my mind was really amazing.  Heh.

Neither one of these pieces has a future.  I don’t like them enough to sell them.  Heck, I don’t like them enough to wear them!  But they’re good stepping stones, I think, for more playing around.  By design, they’re more “modern” than “ancient.”  I want them to look like they belong among my other work.  Still…  I think they need a touch more “ancient” before I’ll be happy.  I already have ideas for improvement, and if I get around to actually trying them, you’ll see them here, of course.

Now, I’ve got a big day ahead of me.  My kitchen is so messy, a little person could go missing in there.  Same for my laundry pile.  I don’t really have any little people to spare around here, so… time to clean up!

2 thoughts on “Playing with scraps”