I solved a problem I’ve been having, and I wanted to share.  If you’re only here for the sewing, the polymer clay, or the occasional glimpse of boring office guy, you’ll have to come back tomorrow.

I use Gmail and Calendar through Google Apps for my lisaclarke.net domain.  I’m very happy with the Google Apps service, except for one thing:  the inability to seamlessly use the same email address for Apps as I do with any non-Apps Google services, in particular, Reader. 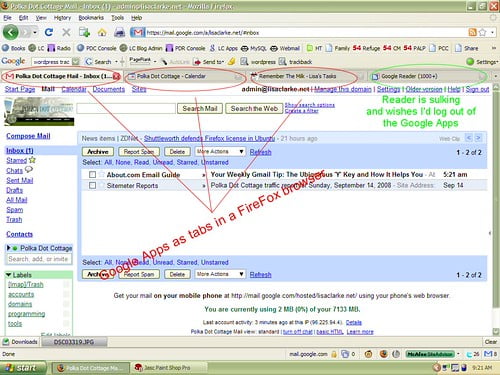 When I am in Reader, I am logged out of Gmail.  When I am in Gmail, I am logged out of Reader.  The Apps account and my regular Google account are in constant conflict. [Note: This conflict only arises when using Gmail & Calendar for Google Apps.  The regular versions of Gmail & Calendar do not conflict with any of the other Google services, because in the latter case, you are accessing everything with the same account.  In the former case, you have two different accounts using the same email address.]

I could eliminate this conflict by using a different, non lisaclarke.net email address for my regular Google account, but I don’t want to.  I want all of my Google-related email to go to a lisaclarke.net address, and I don’t want to complicate my life with a superfluous email account whose only purpose is to forward messages onto the real destination.

The most elegant solution would be for Google to include a version of Reader in Apps, but that doesn’t seem to be happening.

In the meantime, Google has unleashed a new browser called Chrome.  I downloaded it and played for half an hour, but ultimately put it away and went back to Firefox.  I am a huge FF fan, mostly because of the available extensions.  Without my Gmail notifier, Reader notifier, IE tab, TwitterFox, miscellaneous GreaseMonkey scripts, and who knows what all else, the browsing experience would be seriously lacking for me.

Chrome has a lot of catching up to do before I consider it a viable alternative to Firefox.

However… there is one thing that Chrome has that I find very appealing: the ability to create application shortcuts.

For instance, if I use Chrome to visit my Google Apps Gmail account, and then tell it to create an application shortcut, it will place a Gmail icon on my start menu (and/or desktop & quick launch bar).  When I click on the Gmail icon, a Gmail window opens.  Technically, it’s still a Chrome window, but it’s had all of the browser-like parts stripped, and its sole function is now Gmail.  In this way, I can basically treat Gmail like a standalone application, rather than a window in a browser.  I can do the same for Calendar, non-Google sites like Remember the Milk, and basically anything that would be useful as a standalone application.

Wanting to understand how the Chrome-generated application shortcuts worked (How is running one of them different than running a regular browser window with the toolbars turned off?  Is it different at all?), I did some research on this, and I talked to Neil about it.  I am still fuzzy on how it works, but I did learn that Google isn’t the only company doing this.  Mozilla, the geniuses behind Firefox, have a product called Prism, which does much the same thing.  Now we’re talking!  I uninstalled Chrome, installed the Prism extension for Firefox, and now I have application shortcuts on my start menu for my mail, calendar, and tasks, and I didn’t have to cheat on my favorite browser to do it. 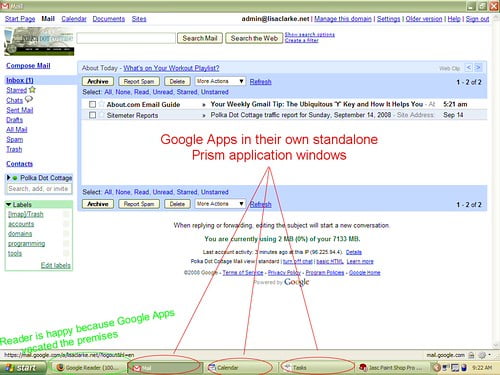 Gmail, Calendar and RTM are the sites I use to enhance my productivity, so they make the most sense for me to be able to quickly open up, without the trappings, screen clutter, and – let’s face it – temptations of a full browser.  Following external links in one of these Prism application windows will open up a new tab in your Firefox browser, so you don’t lose your place within your application.  Perfect!

But the best part about this?  With my Google Apps running in their own Prism-generated windows, and all of my other Internet-related activities still in Firefox, there are no conflicts between my Google Apps account and my regular Google account, even when I’m using the same email address for both of them.  This is because Prism has its own area, separate from Firefox, for storing information about your current session, and neither application really cares, nor needs to know, what the other is doing.

For the one day that I’ve been using this setup, so far, I’m quite happy with it.  I’ll be sure to update here, if I have second thoughts later.

It’s a shame that Google is getting all of the press with Chrome, when Mozilla is doing some amazing things, too.  You should take a look at Ubiquity.   Watch the video.  It’s very cool.  Add voice-recogition, and it would be pretty much like living in Star Trek land.

Alright.  I’m done geeking out.  Maybe I’ll go do something girly today, so I will have a post tomorrow that doesn’t leave your eyes glazing over 😀

14 thoughts on “Geek talk: Why I Heart Mozilla”