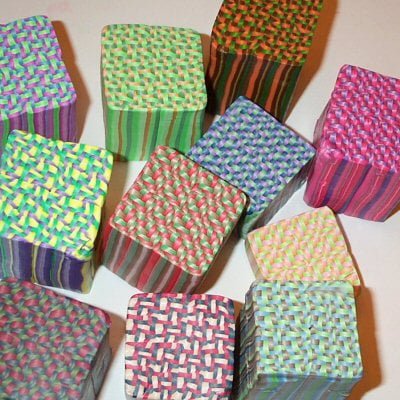 This pattern imitates the look of three raffia ribbons woven together. I’ve made it in several color combinations, and they all look really nice. I am particularly fond of the results when I start with 3 very dark colors and blend them with white – the more contrast between the three main colors and the blending color, the more striking the depth effect. Feel free to substitute your own favorite colors.

This article was originally published in the Fall 2005 Issue of PolymerCAFE Magazine.

Make a Skinner Blend jellyroll from the Brown and White. Repeat with Red and White followed by Green and White. Do not reduce.

Stand the Brown cane on its end and slice it down the center, top to bottom. Turn the two pieces 90 degrees and repeat. This should give you four equal-sized wedges.

Take one wedge and with your fingers, push the edges of the dark color up towards the light color.

Flatten the wedge against your work surface so that it becomes rectangular. Repeat with each remaining wedge and then arrange them side-by side.

Press together and reduce to form a rectangular cane with spikes of color.

Reduce again, cut in half, and re-assemble so that there are 8 spikes. Repeat to make a cane with 16 spikes.

Reduce the cane one last time, cut in half, but this time reassemble with the light areas touching so that the shaded sides are opposite each other and the highlight is in the middle.

Further manipulate this cane so that the face is wide and short, with its width measuring exactly 3 times the height. Give the same treatment to the Red and Green jellyrolls. At this point, it might be helpful to refrigerate your 3 canes for a short while, particularly if they have gotten soft. Some firmness is necessary for the assembly and reduction process, if the design is to remain true.

Assemble the components as shown, taking care to notice which direction the partial components are supposed to face. The “cut” sides should be facing out so that they may re-join neatly in the next step.

Carefully reduce the cane until it is approximately 12 inches long. Cut off and discard any distorted ends and then cut the cane into four equal lengths. When you re-assemble the cane, be careful not to change the direction of any of the four lengths. They all need to be going in the same direction so that they line up nicely when re-assembled. You’ll want to see that the places where you had partial components are joined with their corresponding parts to make a whole.

Reduce as before, until the cane is at least a foot long. Cut into equal quarters and reassemble as before, matching up partial components to make whole ones.

Reduce this cane as well, but only until the “face” of it has reached about 1 ½ inches in width. This is your finished cane.

Use this pattern as a veneer on all kinds of fun things, from tube beads to miniature picture frames and covered pens!

14 thoughts on “The Weave Cane”