Ooh, this mosaic makes me feel so festive! I’m a little bit behind this year, in terms of decorating for Christmas, but I put Tacky Santa in the window last weekend, and have been playing with a string of holiday lights that have been keeping me entertained for days. I nearly forgot there was more decorating to be done!

Yesterday I decided to tackle the kitchen, but I was having trouble getting motivated to do it. I ended up setting up two cameras on tripods and photographing the kitchen from two angles at five-minute intervals so I could have a stop-motion video of my progress.

In the end, I didn’t think the video was really worth making, but the kitchen got cleaned and the Christmas linens got put out, so I think the effort was worthwhile! I’m considering the same trick in the living room some time this weekend. While Tacky Santa is giving his signature red glow to the room, that’s really the only festive thing in there (impressive as it is). I need to at least put out the Santa pillows.

I am feeling so darn festive!

I still don’t have my gift-giving very well-planned yet, but that’s nothing new. My strategy is a mixture of thinking WAY ahead (like, picking up the odd gift here and there in August or October, or spending all of November crocheting a gift) and doing a mad-dash of online shopping three days before Christmas. I am Last-Minute Lisa. Except in the few cases where I’m not.

It’s a roundup of the photos I shot for my Project 365, plus some everyday-life images I posted on Instagram during the previous week. (FYI, my daily photo project this year has changing monthly themes. December’s theme is “Merry,” wherein I will try to find something cheerful and festive even when I feel entirely too busy and/or crabby [which, incidentally, is exactly when it will do me the most good].) 365: Merry 6/31 – I spent all afternoon purging a lot of junk from my bedroom (LONG overdue!), and then I kicked back and relaxed with a December slide show. 365: Merry 8/31 – When I sat down to fill some more hook orders this morning, I decided I needed a little festivity at my work table. I plugged in my foil tabletop tree, and dumped a pile of white lights on the end of the table. Tacky Santa watched from the living room window. 365: Merry 9/31 – And in the "anything can be merry if it’s surrounded by enough little white lights" department, I present our afternoon snack. 365: Merry 10/31 – Not everyone is lucky enough to be greeted by a creepy vintage double-faced light-up Santa head when they come home at night… 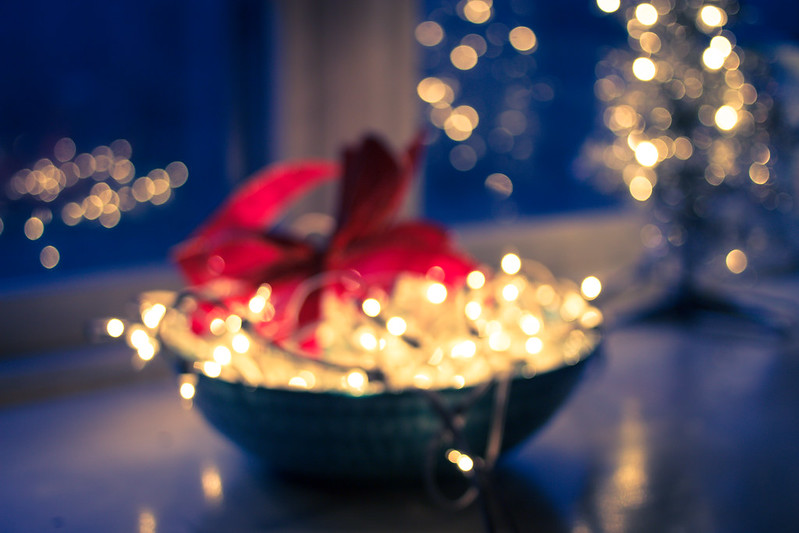 365: Merry 12/31 – I dumped them on a table top, I draped them around a snack tray, and now I’ve put them in a bowl. I think It’s safe to say I am never actually hanging up these lights.