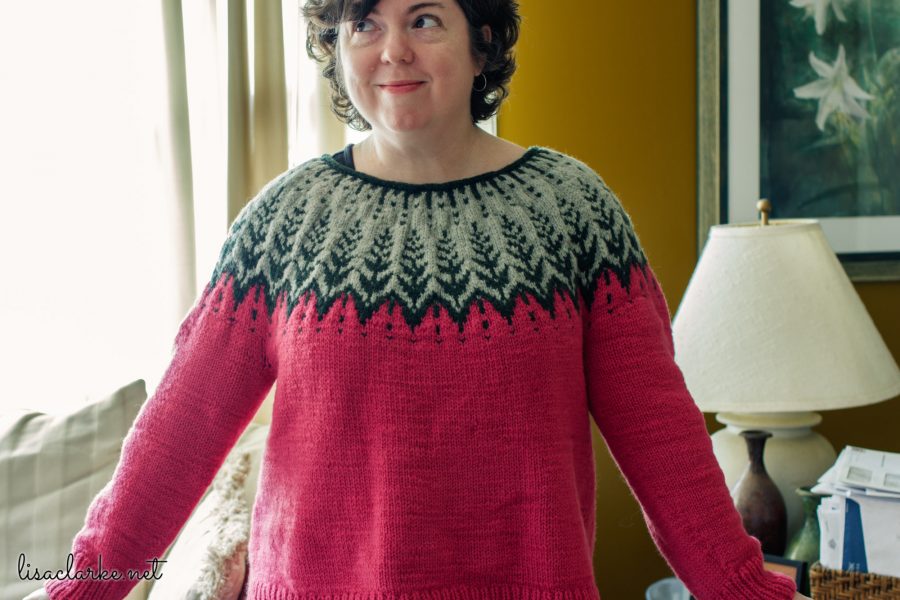 I finished knitting the Vintersol Sweater, my first sweater of 2018, and against all odds, I like it! I like it enough to post twice in one day 😁

Here’s what this project had going against it:

Really, when I saw the way this was going I should have started over, but I was pretty sure that if I ripped it out, that I would never re-start it. I’m not big on do-overs in knitting.

So I persevered despite my misgivings, and when I took the sweater off the needles for the first time and tried it on, it fit like a roomy sweatshirt. Roomy sweatshirts have their place, but that’s not what I was going for here.

Oh well. I made up my mind to be fine with it. And then I soaked the sweater.

And after squeezing as much water out of it as possible, I held it up, and the hem came in about mid-thigh. Mid-thigh!!

At that point, I decided to take a huge chance and throw it in the dryer. I wouldn’t normally suggest such a thing, but I knew I wouldn’t wear it the way it was, and I didn’t want all of my work to go to waste.

So I took the sweater, and the towel I’d squeezed the water out into, and put them both in the dryer together for a nervous 5 minutes. I took it out, and tried it on. It was still damp, and the fit was a lot better, but it was not quite there yet. So I gave it another 5 minutes.

This time I took it out and I had a slightly-felted sweater that was still roomy, but roomy in the right way and not roomy in the almost-to-my-knees way. Success! (And relief! Because throwing a wool sweater in the dryer has never been a gamble that’s paid off for me before.)

There was still one problem, though: the neckline. It was so wide, that the whole sweater drooped really low. I didn’t like it at all.

So, I took some matching yarn, threaded it around the entire collar, and gave it a pull, drawstring-style. When it cinched the neckline to a size I liked, I tied it off to make it permanent. 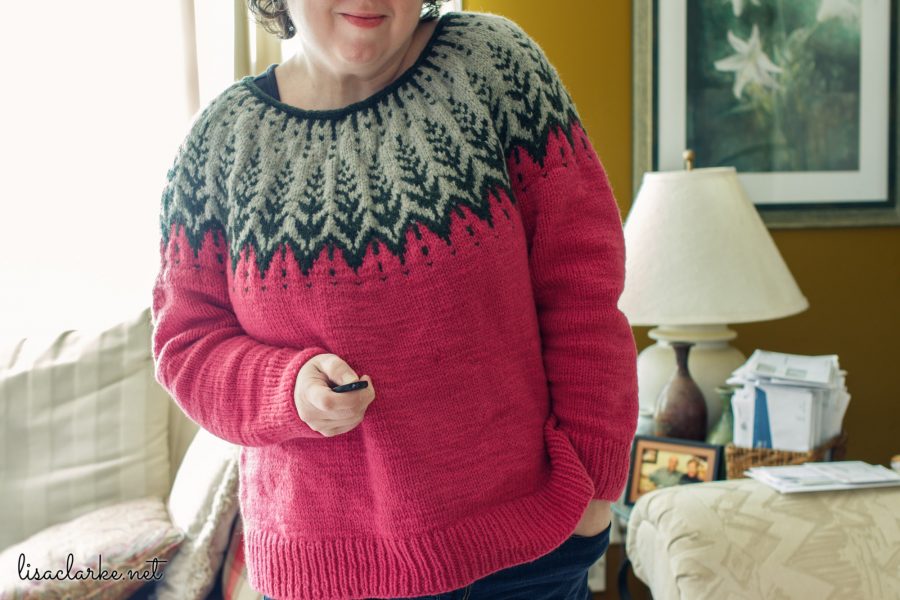 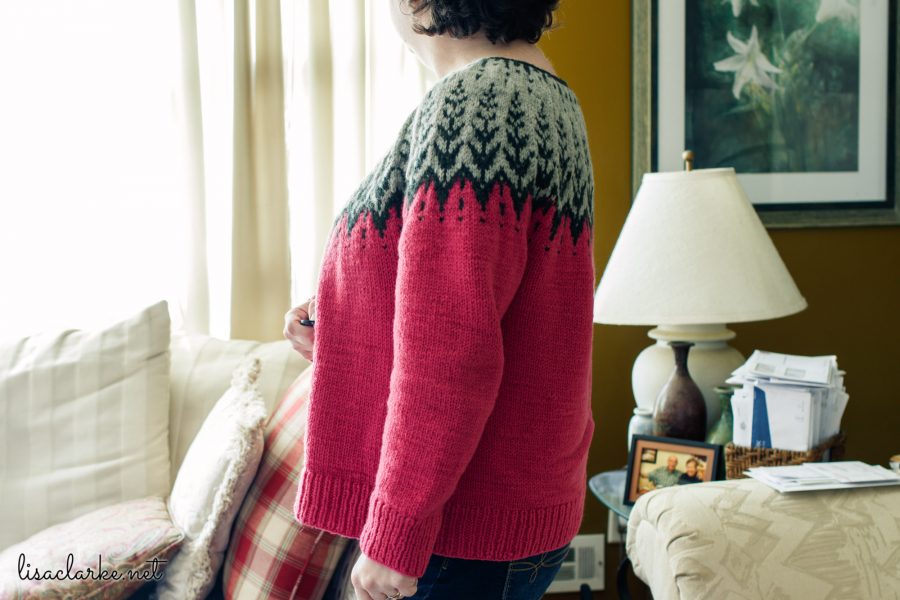 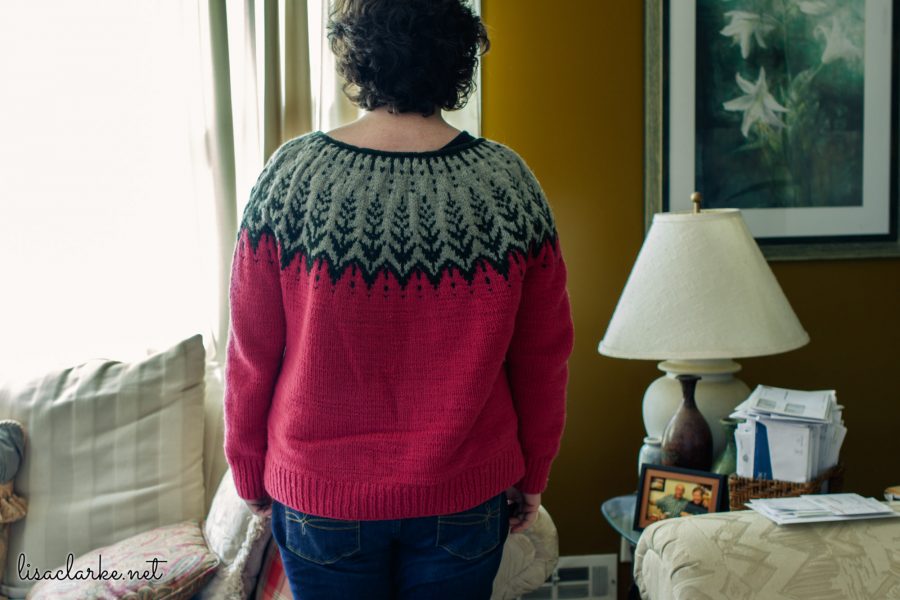 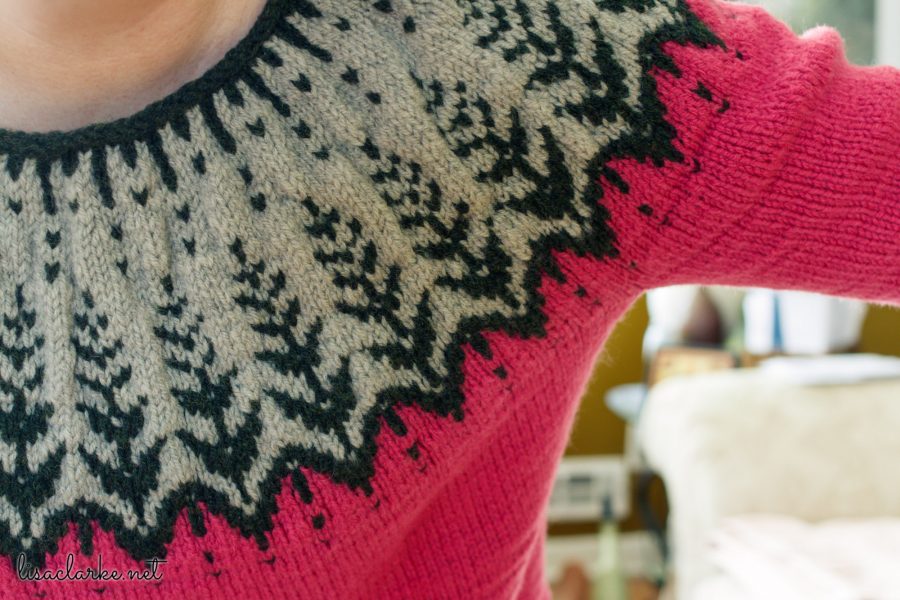 And now, after all of that fiddling, I have a sweater that doesn’t fit like I originally wanted it to, but is plenty comfortable, looks good, and is super soft. I don’t know if it would have been this soft without partially felting it, but it’s soft nonetheless.

My biggest problem with it now? It’s so distinctive, if I wear it too often everyone will recognize it, LOL! I will have to somehow limit myself to a respectable once-per-week…

Modifications: While knitting, I did none of the optional body shaping, and I skipped the colorwork on the hem and sleeves. Plus I did all of the after-blocking nonsense described above.

Thoughts on the pattern: I enjoyed knitting this, and it gave me enough practice holding two colors at once, that I almost feel proficient at it. The method of constructing the yoke was really unique, and I love the i-cord bit at the neckline. I’m definitely going to use that in other projects.