Last week, I chose to write about the table mats I’d made for the living room, mainly because I was feeling lazy and didn’t want to have to take pictures.

What’s funny is that in writing that post, I moved the table toppers to the front of my brain, and I woke up Saturday morning thinking I could use one for my bedroom night stand. This was not a problem, since I have plenty of cheap stash cottons, and Saturday morning was made for quiet pursuits over coffee. It was an easy choice to crochet one up before I went about the business of my day.

Only before I could go about that business, I found something on Instagram that would shape the rest of my weekend. More on that in a minute. For now, let me just show you how my little nook turned out: 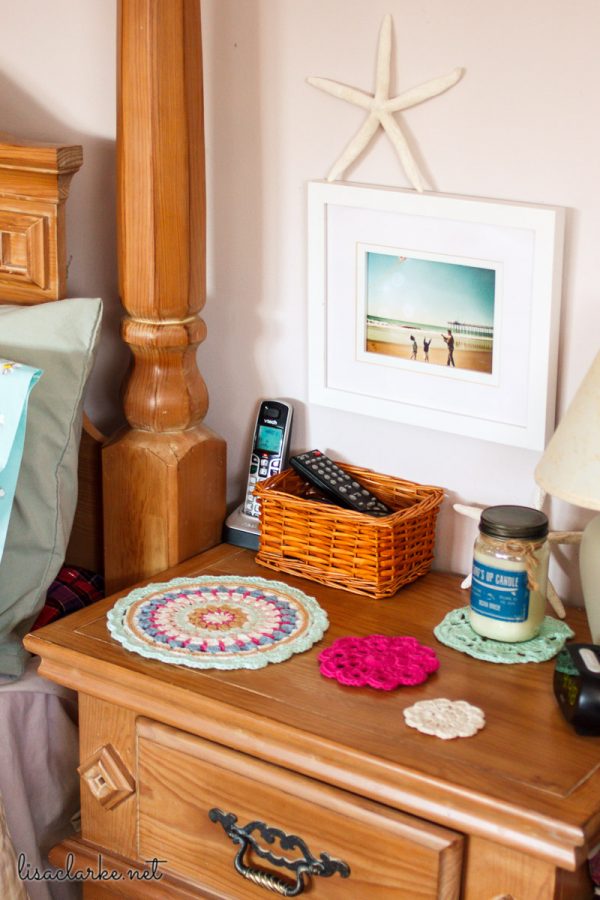 I love it. It’s an oasis of pretty in an otherwise kinda cluttered space (there’s a reason I cropped this image in nice and close…). I even grabbed a hammer and a nail so that I could hang up that picture frame that’s been sitting on the table propped up against the wall for 8 years taking up precious tabletop area. And it took me all of 5 minutes to hang it properly. Duh.

Let me tell you about all of the crochet pieces here, in case you want to make any of them yourself. For all of them I used inexpensive worsted weight cottons from my stash, mostly Lily Sugar’n Cream, Peaches & Creme, and Dishie.

This one is actually just over a year old and the only one I didn’t whip up this weekend, but I searched through the blog archives and realized I only mentioned it in passing and I never shared the details. This thing has gotten a lot of comments and complements, so I really do need to share the details!

When I first made this, I regretted one of my color choices. The blue stripe sticks out in a way that I don’t like. I don’t want to re-do it, though, and I’ve gotten used to it enough to let it stay. For now 😉

Pattern: Little Spring Mandala by Barbara Smith of Made in K-Town

Modifications: I added four additional rounds between pattern Round 8 and pattern Round 9 to make the mandala larger. I didn’t take notes, but looking at it now, it appears that the four rounds I added were repeats of Rounds 2-5, but in different colors.

This one is just like the ones I showed you last week but in a more bedroom-friendly color.

Modifications: I used only one strand of yarn (instead of doubling it) and an F hook.

Ok, here is where I fell down the Instagram rabbit hole. I came across this image, which inspired me to hunt down the pattern on Pinterest, which led me to this blog post, which was a dead end because the original pattern had been removed from the internet.

Off to Ravelry, where I found an entry for it, as well as a link to an image of the original pattern web page that was captured before the page went offline. Yay!

This is an adaptation of a vintage pattern from 1893! It’s very well-designed in that it instantly lays flat when you’re done with it. No blocking necessary. Every other motif I have ever crocheted in cotton has been kind of a crumpled up mess when finished and has needed to be blocked before it would be suitable as a coaster.

Pattern: Crochet Coasters by Sandi Marshall, based on the Crocheted Wheel for Tidy pattern from The Ladies’ Model Fancy Work Manual.

Modifications: I found it hard to squeeze 20 dcs into the center ring, so I ch 8 at the beginning instead of 6.

This last one was kind of an afterthought, and it’s not really big enough to do coaster duty, but I thought it filled a small empty spot on the table nicely. I learned to make flowers like this from the Craftsy class I took when I first picked up crochet.

That’s the whole lot of them! The three I made on Saturday were finished by early afternoon, and somewhere in there I had time to have lunch and do a load of laundry.

After supper, I got the urge to whip up a bunch more of the vintage coasters, and so I put on some Netflix and cranked out about 5 of them in a couple of hours. I kept working on them in stolen moments all weekend until I had this: