Ah, the dining room. Sometimes my studio. Most times (sadly) my dumping ground. A few weeks ago it looked like this: 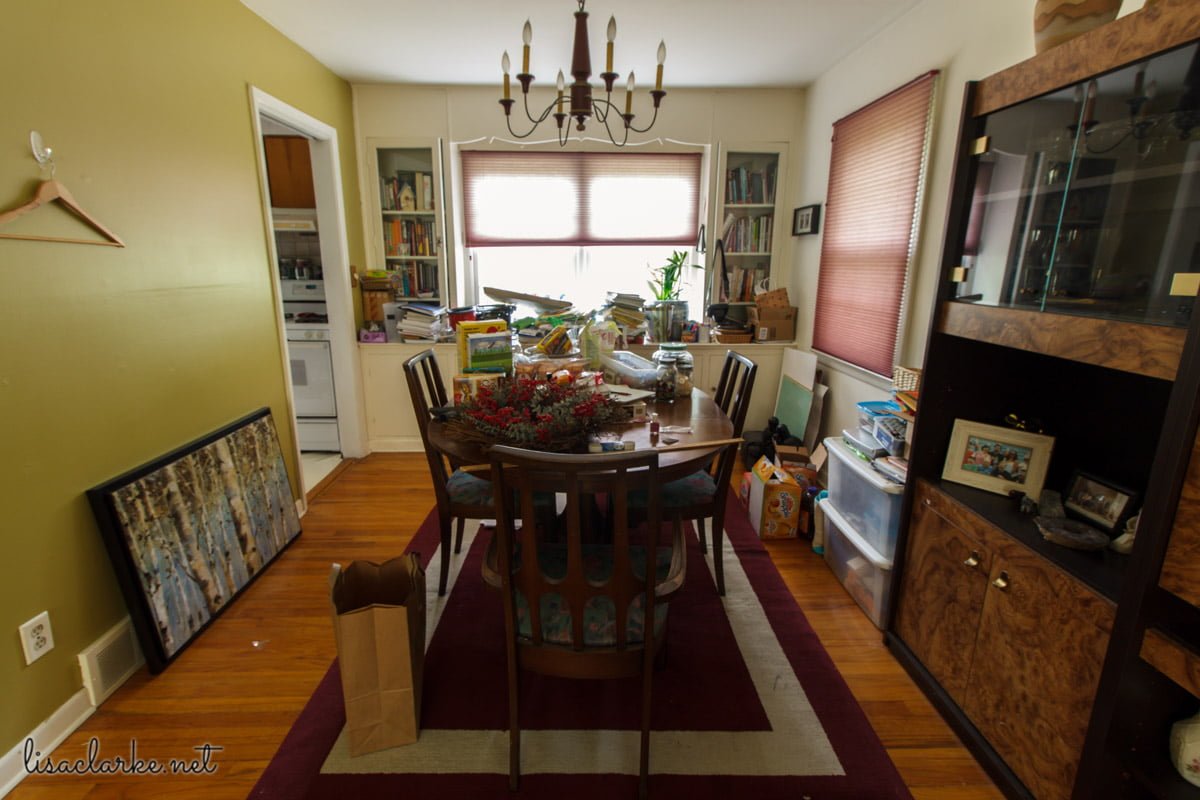 Ugh. But frankly, not nearly as bad as it sometimes gets. So I straightened it up and it looked like this: 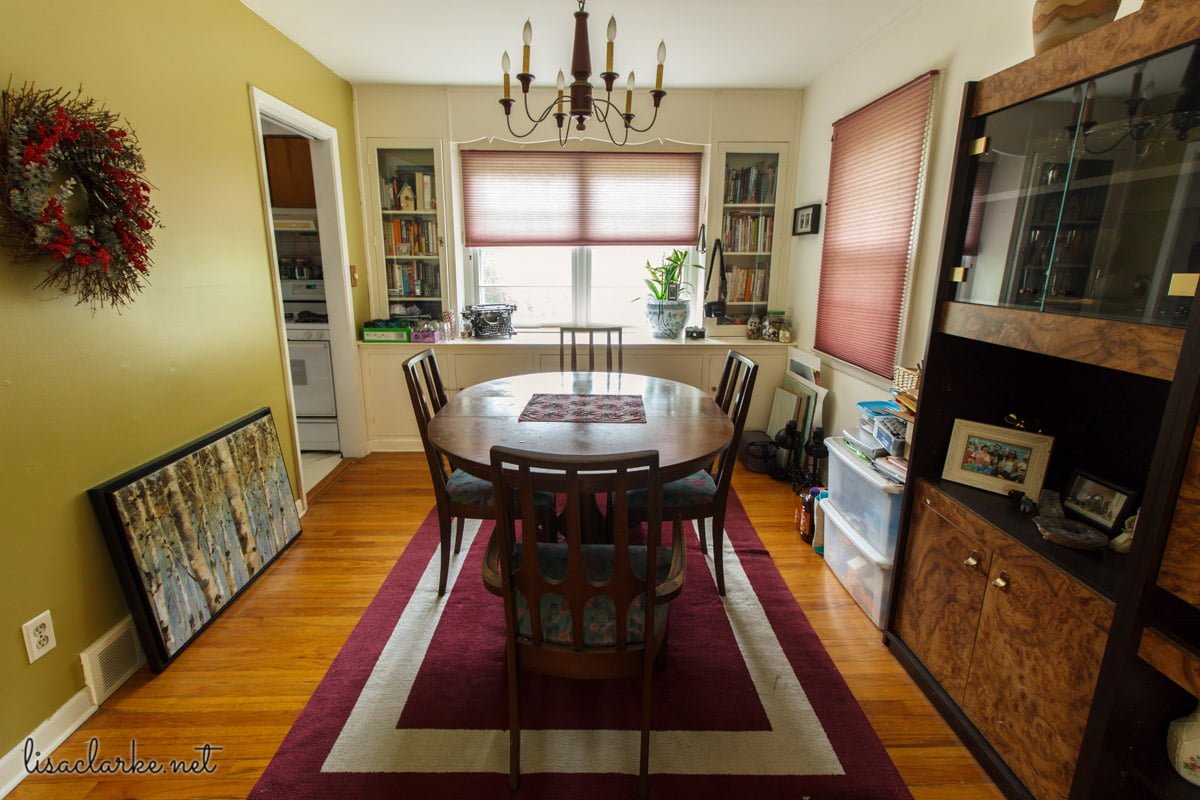 Much better. And it probably would have stayed that way until the next whirlwind sewing or polymer clay session happened, if not for the fact that our family members had stuff to get rid of. This stuff was better than what we had so we gladly traded up. 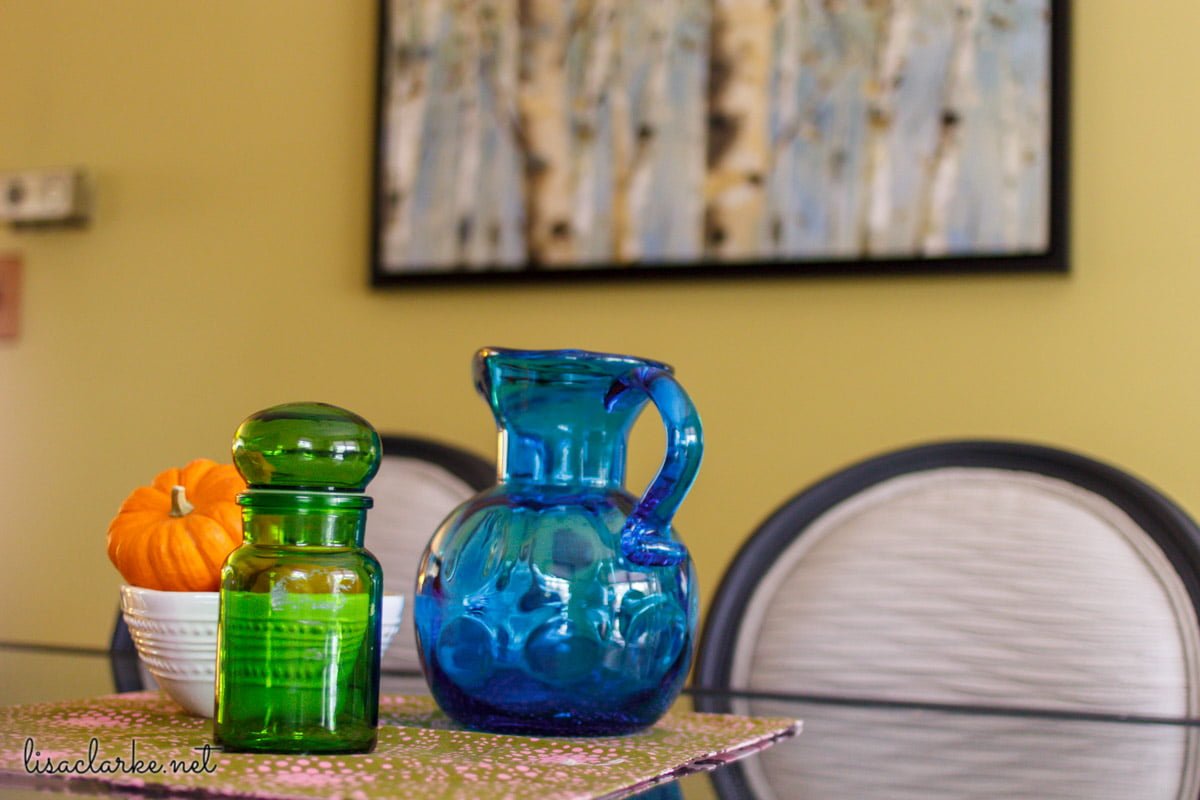 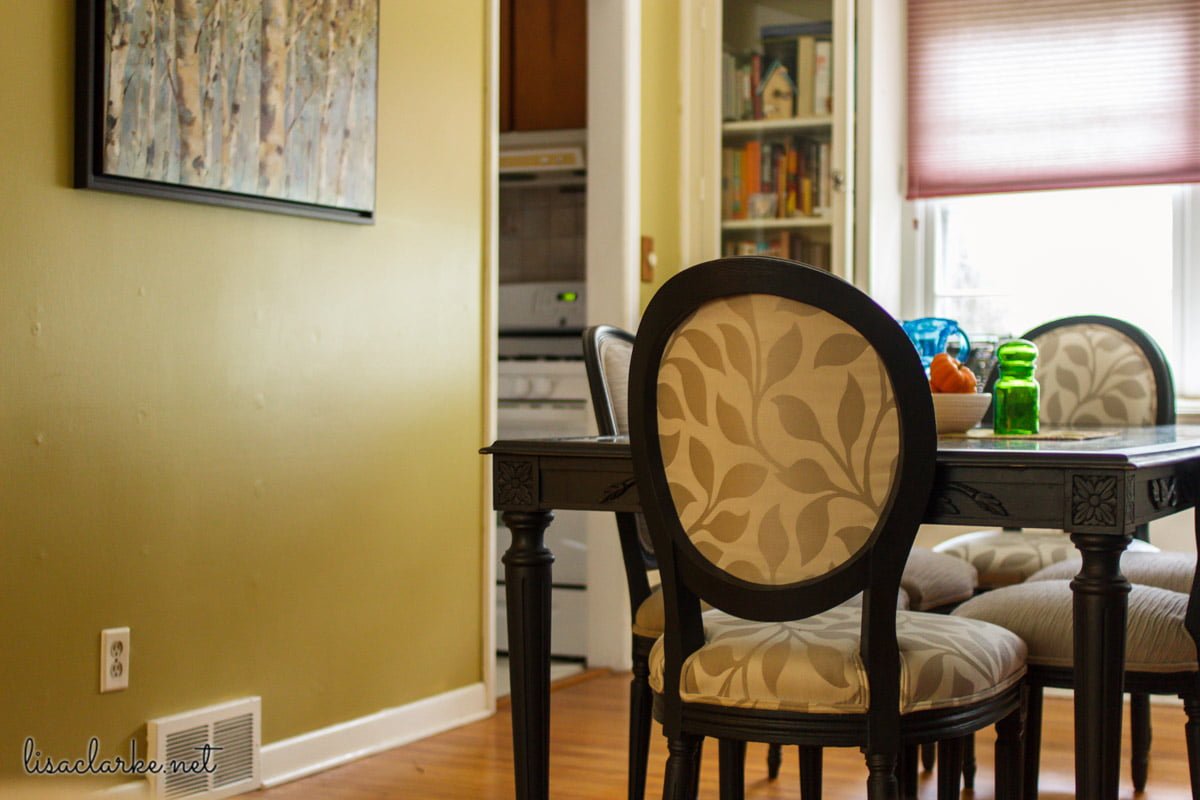 The painting was one that I had picked out with my Mom a few years ago for my parents’ dining room. I loved it then, and when they decided to replace it, I asked if I could have it. It goes so nicely with the color on that wall, plus it introduces a nice blue into the room.

The table, I will admit, I initially resisted. My sister-in-law and brother-in-law recently moved into a house with a smaller dining room than their old place, and they couldn’t keep the table. I, not really liking glass tables, said, “no thanks.”

Neil thought I was crazy given the condition of our old furniture (it was kinda bad), and when I saw the table, I decided he was right. I had forgotten how nice the set was, despite the glass. 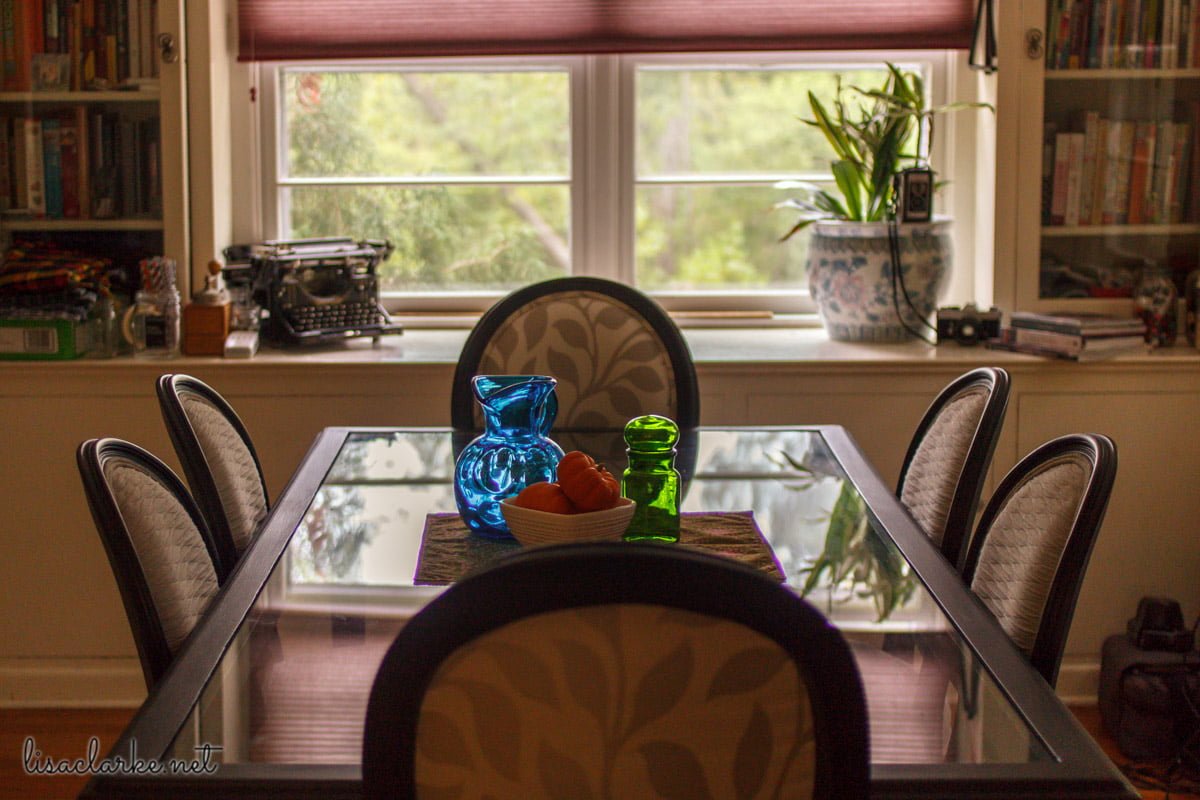 The table and chairs are actually a DIY of their own, and I wish I had some “before” pictures to show you, because I can pretty much guarantee the transformation would have impressed you.

The table and four of the chairs came from the dump. The other two chairs were from Homegoods. My father-in-law upholstered the chairs, and my mother-in-law painted the whole set (which had been beige) black. Isn’t that neat? I’m pretty useless with furniture makeovers myself, so I’m always impressed to see something come together like this set did.

I love the way all of the new stuff looks in here, but I’m still not crazy about glass table tops, so I decided to make a table runner that would cover a good portion of it. 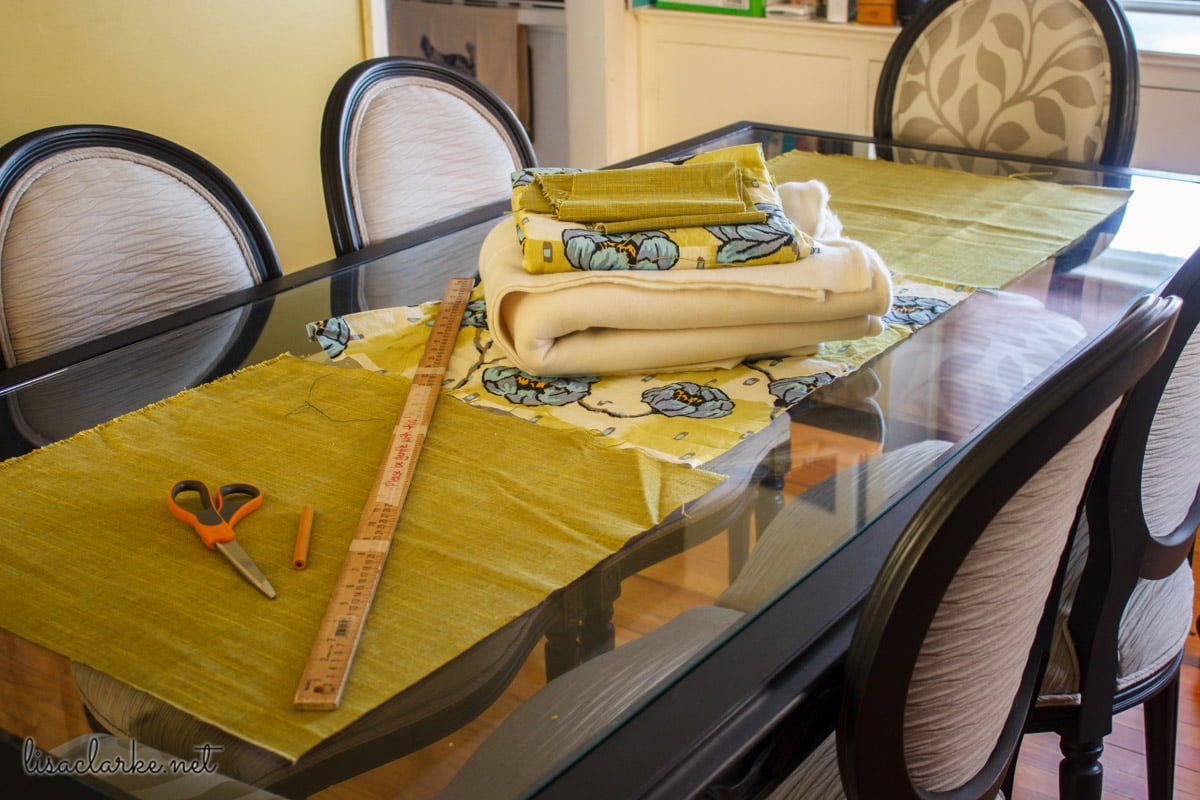 The patterned fabric is from Amy Butler’s Lotus collection. I knew it would match when I realized the colors in the painting and the wall were the same as those in Eamonn’s lap quilt. Most of those fabrics are long out of print, so I had to take what I could find on eBay. I had my eye on a particular print with more gray in it, but had no luck finding the one I wanted. Oh well. This one is fine. 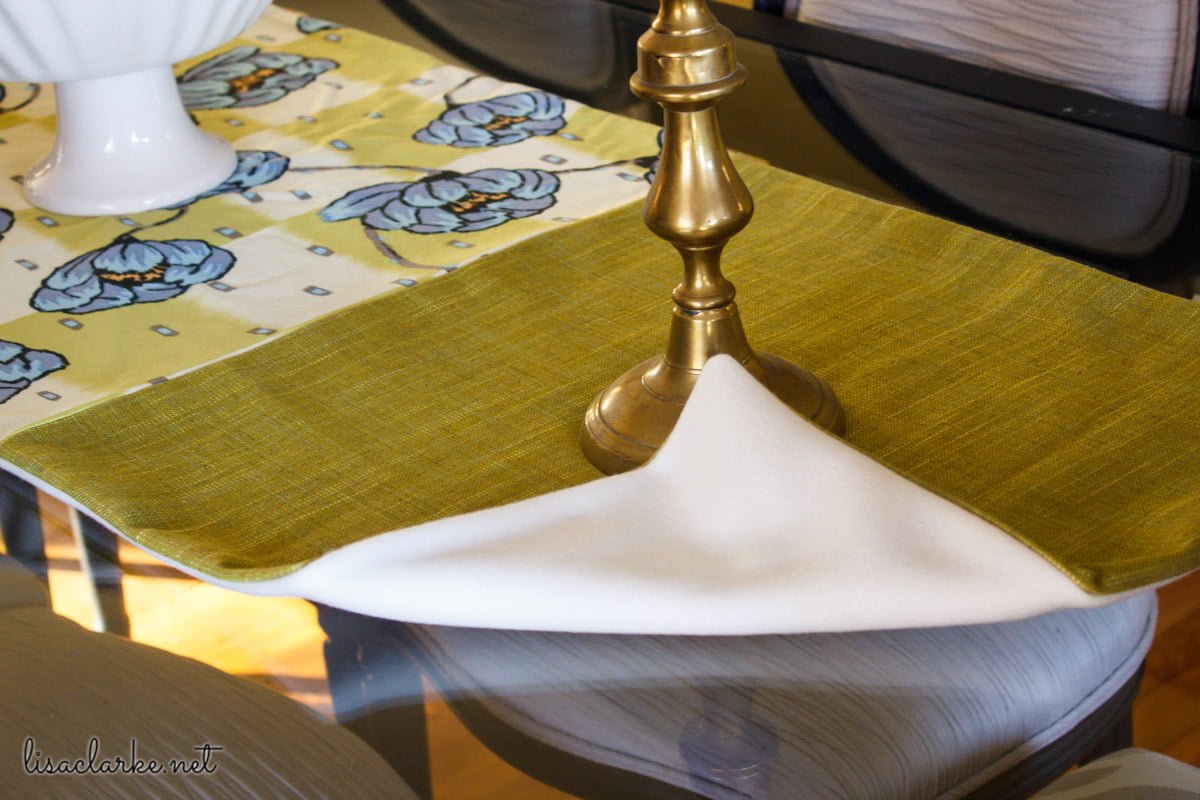 I hit the local fabric store and found the green remnant for $2. I’m not sure what it is, but it almost feels like a burlap, but nicer. It’s pretty stiff. For the back I got some off white fleece, and it’s so soft and cushy. I want to wrap myself in this stuff! 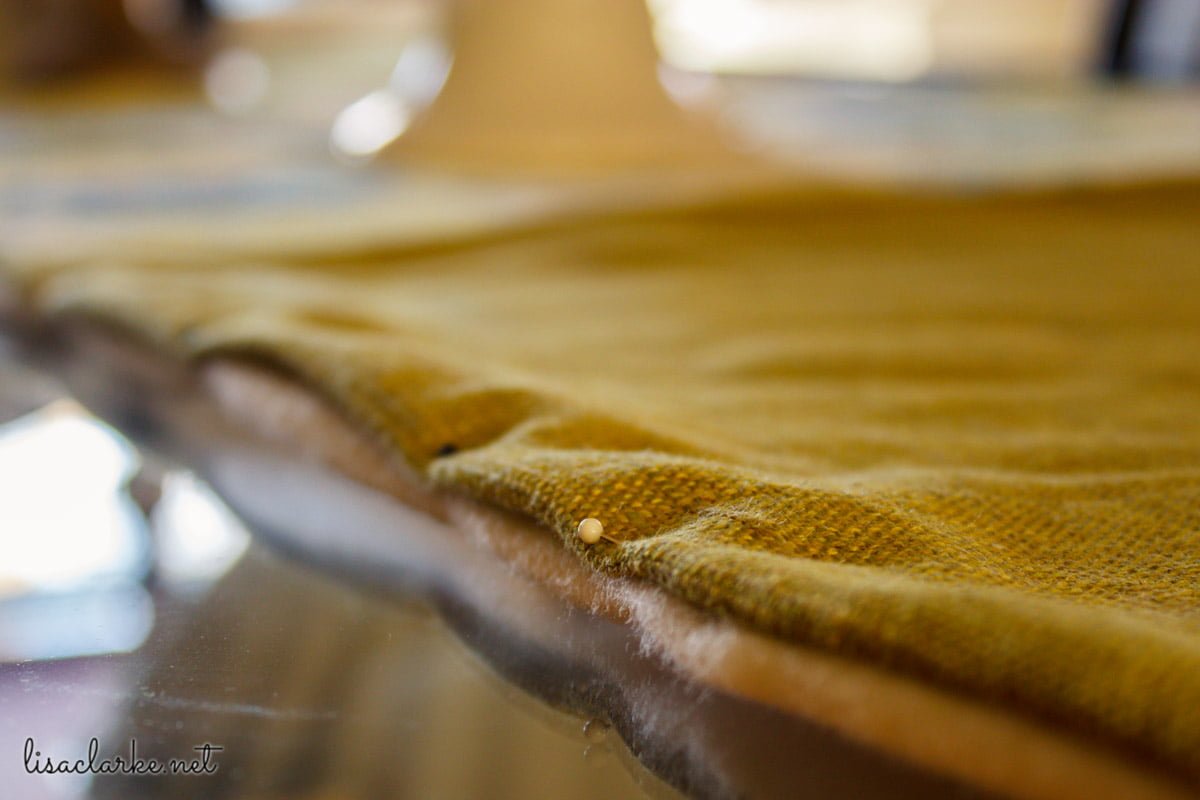 I am resisting doing any top stitching on this thing, because that is usually where I ruin a project like this. It means I have to stitch the opening by hand (and I still haven’t done so) but I think I can live with that.

So this is the room now! 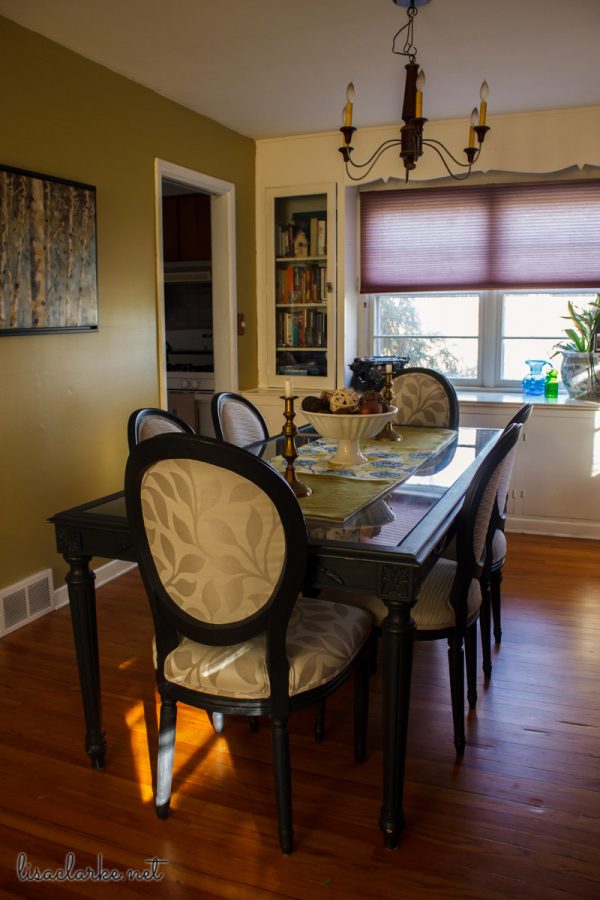 I love it so far! I say “so far” because there is more to be done (at some point). With the old dining set and the old rug out of here, there’s no longer any maroon for the light fixture and the blinds to coordinate with. Plus, I don’t really love them. So the next thing is to find a new light for the room and to replace the blinds. Who knows how long that will take! We don’t tend to prioritize these things, and then we forget about it and eventually go blind to the fact that there are mismatched things in the room…

Also, did you notice that I took the “after” picture at an angle? Yes, well, I have to admit I haven’t entirely cleaned up the room. I shoved some stuff out of the frame in order to get my glamour shot. 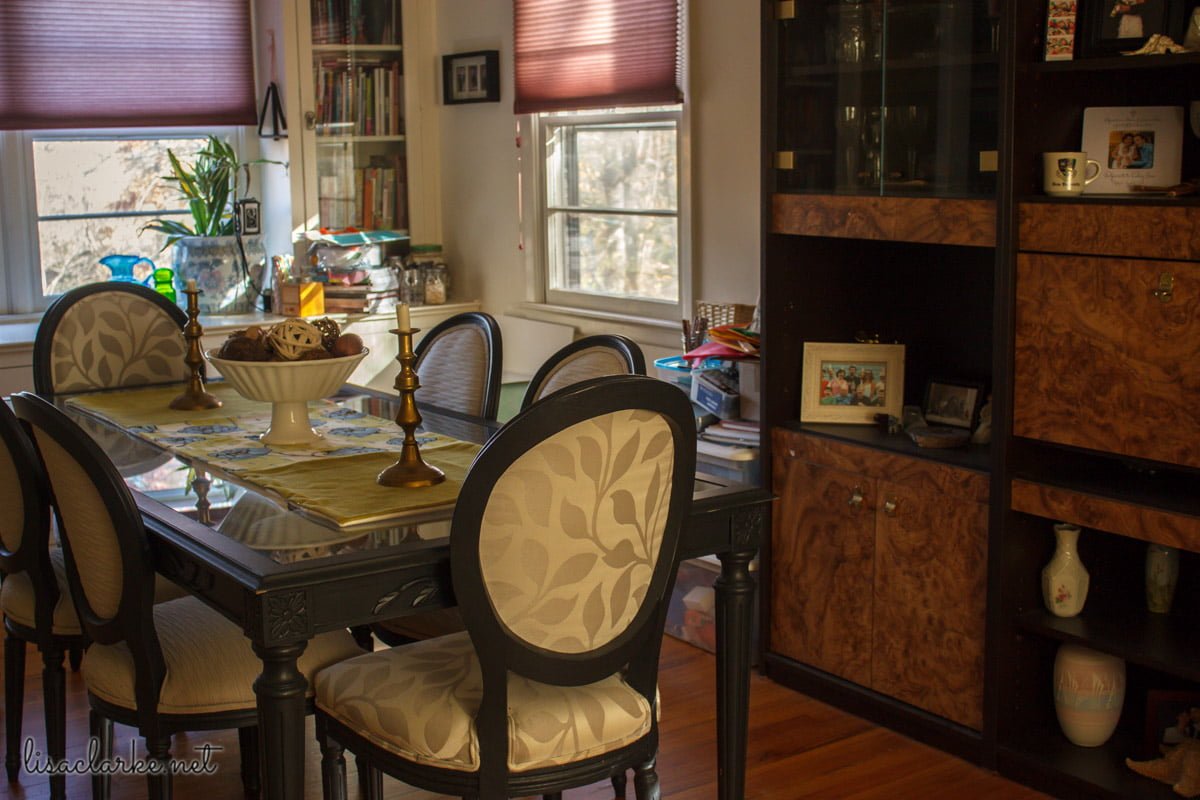 Also there’s this wall unit that I have never liked and would really like to replace, some photography stuff that I don’t really have a home for, and a couple of tubs with my shop inventory in them…

So, not quite finished, but it’s coming along. And it’s kind of fun because we never planned to do anything in here. A makeover just pretty much fell into our laps. I did the math while writing this post, and realized that (aside from a paint job in 2007) our dining room has remained largely unchanged since we moved in here. That will be 18 years ago in December. Yikes.

So it’s time for this. Definitely. 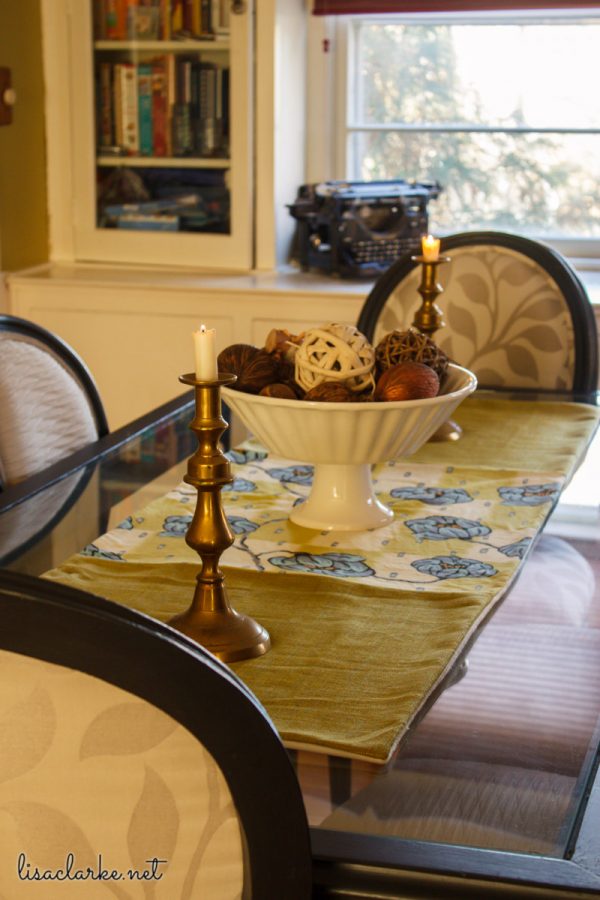 Wouldn’t it be nice if my momentum with the table runner actually held up long enough for me to do something about all the rest of it? We’ll see…

By the way, the pedestal bowl (and the stuff inside of it) came from Homegoods, and the candlesticks once belonged to Neil’s great-grandmother.