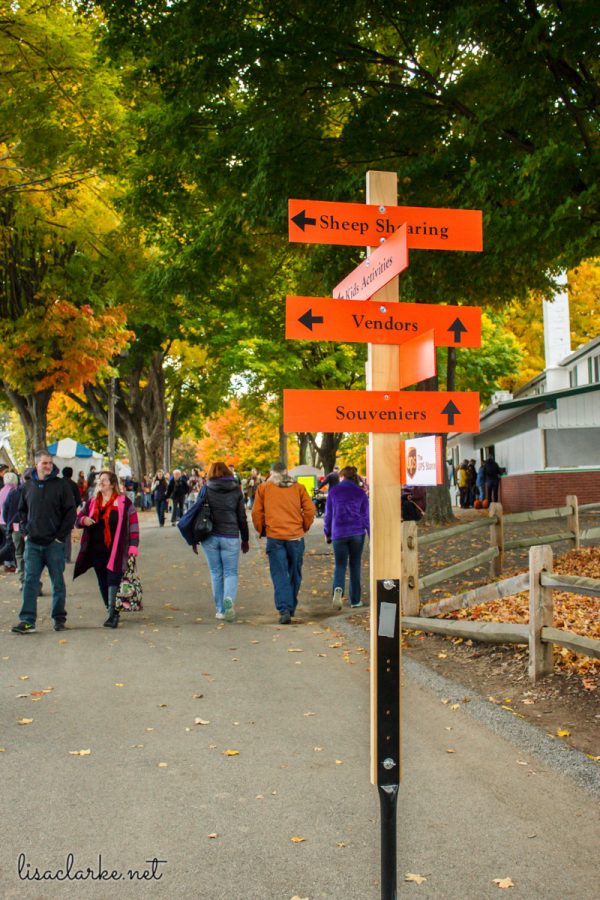 Can you believe it’s Thursday already? My Rhinebeck report is long overdue.

Aidan and I drove up after supper on Friday, and arrived in New Paltz, NY around 8pm. In the four years we’ve been doing this, we have stayed somewhere different each time, although until now the hotels had always been in Fishkill.

New Paltz was new territory for us. It was an extra half an hour from home, and it is to the west of the Hudson River. To get to Rhinebeck from New Paltz, you drive up 9W, cross the Hudson just north of Rhinebeck, and come back down south for the Fairgrounds. By contrast, when you are in Fishkill, you’ve already crossed the Hudson, and you just make a straight line up Route 9 and into Rhinebeck.

We know the Fishkill to Rhinebeck route very well. We have a favorite diner, and we know pretty places to stop. It turns out New Paltz to Rhinebeck is also a lovely drive, and probably less commercially built up (although neither route is really what I would call over built). It was gorgeous and the mountain views were so breathtaking, although I have to admit I kind of missed some of our usual stops.

We arrived at the Dutchess County Fairgrounds sometime after 10:00.

Remember last week when I posted about my difficulty being social at these things? Well, I’m happy to say that this time around was quite different. Because of my strategy to ask people ahead of time to keep an eye out for me, I had no need to attempt to breach an established group of people, or initiate a conversation with a stranger. Instead a small handful of people came to me. And I was recognized by a group of Ravelry introverts I’d connected with online who called to me to join them.

The funny thing is that I had gone to some trouble ahead of time in social media to create a hashtag, to make sure people knew what I was wearing and what the Polka Dot Cottage logo looked like, but do you know what was the one thing that made me stand out more than anything?

Aidan. I had mentioned in passing that I’d have my teenage son with me, and that is apparently a very unique thing at Rhinebeck. Just about everyone who chatted with me said they noticed me because of the big kid with me. Funny.

More than ever this year I found myself realizing just how little I notice faces at this event. Sweaters, though? Those I notice. And if I’d written this post on Sunday evening when I got home, I might have had a hope of remembering what some of the more popular designs were. I’ve already forgotten, though. I do know I saw a nice number of cabled pullovers, and there was so much layering of knits. It was a cold weekend!

I didn’t want to go overboard with all of the yarny things, so I only wore my Everyday Cardigan, but boy did I wish I had supplemented with a cowl and a pair of fingerless gloves. Did I mention it was chilly? And really, where else can you get away with wearing too many knits at once if not the NYS Sheep and Wool Festival??

A dpn needle case from Go Monkey Designs, which I have wanted since roughly 2 minutes after buying the circular needle case last year.

A hank of gorgeous yarn from Morning Moon Alpacas. It’s exactly the same one I bought last year, of which I made a hat that I don’t really like. I plan to frog the hat and use the combined 400 yards for something better.

The Yarn Whisperer by Clara Parkes, who also signed it for me.

A small bottle of Soak, because it’s about time I learn to wash my woolens.

My big splurge of the weekend was on a lovely little pile of a worsted alpaca/wool blend from Good Karma Farm in a deep green colorway called Texas Green. Yes, I’m planning another green sweater. What can I say? I like what I like! ☺

I also bought a sweater’s-worth from them in 2012. It was in a color called Chicken Beak Yellow, and it was so deliciously squishy (not to mention way more expensive than the yarn I usually buy) and I held onto it for two years before I finally pulled the trigger on a design. It ended up becoming my Seacoast, which I love so much (though I wish I had had enough to make the sleeves long).

It was a no brainer to go back for more Good Karma Yarn. This time I want to knit a Paradise Cardigan with it.

I should also mention the customer ahead of me who let me have one of Texas Greens she’d just purchased when it turned out there was not enough left in the booth for my sweater. It was so sweet of her. Aren’t yarn people great?

Aside from the obligatory Mapleland Farms deliciousness (maple cotton candy, FTW!) and some other miscellaneous fancy food items from Building E, that’s the whole haul, I think.

We left the festival, wandered around a bit in downtown Rhinebeck, stopped at the Hudson Valley Mall for some supper on the way back to the hotel (only it was run down and a tiny bit creepy), instead grabbed a meal at Applebees, hit a Barnes & Noble (where we ran into a few knitters who’d also been to the festival) for coffee and a couple of magazines, and retired to the hotel for the night.

Sunday we headed home. It was a beautiful, quintessentially Fall day: chilly, with dark threatening clouds overhead and a riot of color in the mountains. I captured none of it with my camera, as I was too busy driving, but I’m not sure if my photographs could have done it justice anyway.

We traveled on the meandering Route 32 for as long as we could before we had to take a major highway the rest of the way home. The Fall colors were probably at their peak this weekend, and each time we reached the crest of a hill, we’d look out at the mountains in the distance and say, “ooh, look at that!”

It snowed on us, too, while we drove. It was our first snow of the season, and it was just the kind of snow I like: flurries, with no chance of accumulation. I felt strongly inclined to break out the St. Louis Jesuits Christmas album I love so much, but the voice of reason next to me came through loud and clear: “no, Mom. It’s the middle of October.”

Generally, it being the middle of October has never been enough to dissuade me from listening to that CD. In fact, in some ways, it almost feels more like an Autumn listen than a December one to me because I jump the gun on it so frequently. Still, I deferred to the teenager who had carried my coffee cup this weekend while I fondled skeins of alpaca, and who had lugged around a Polka Dot Cottage tote bag when it got heavy enough to make my shoulder tired. I probably owed him that much.

Our soundtrack for this leg of the journey: Simon + Garfunkel, and Sunflower Fields (which ended up on repeat quite a bit).

We took a detour to visit my parents, not quite on the way home, and had a nice home-cooked lunch. Again, my camera never made it out.

And then we were home. For roughly an hour before we had to run out again. Busy busy!

It was a pleasant weekend, over too soon. I’m seriously considering doing it differently next year – maybe we show up earlier on Friday so we have time to explore the town where we are staying. Or maybe we don’t leave on Sunday morning, but we stick around until the late afternoon. We tend to zip in and out so quickly, it’s all over in a whirlwind.

My favorite idea is for the whole family to rent a cabin or something for a week, and really revel in some Autumn fun. I can nip off to the festival on Saturday morning and then re-join the family in the evening.

It’s too bad the kids have to go to school, or I would be totally all over that idea!

Speaking of next year, I am also thinking I should pay more attention to my hotel choice. I usually just grab whatever is available, affordable, and decent-looking on Priceline, but if there’s one thing I learned by browsing the #rhinebeck hashtag on Instagram, it’s that there are some hotels that are “party hotels.” Or, I should say, knitting party hotels. That sounds like fun to me. I’d love to hang out in the lobby the night before the festival, working on a project and chatting with other people who are doing the same. I’ll have to remember that for next time!