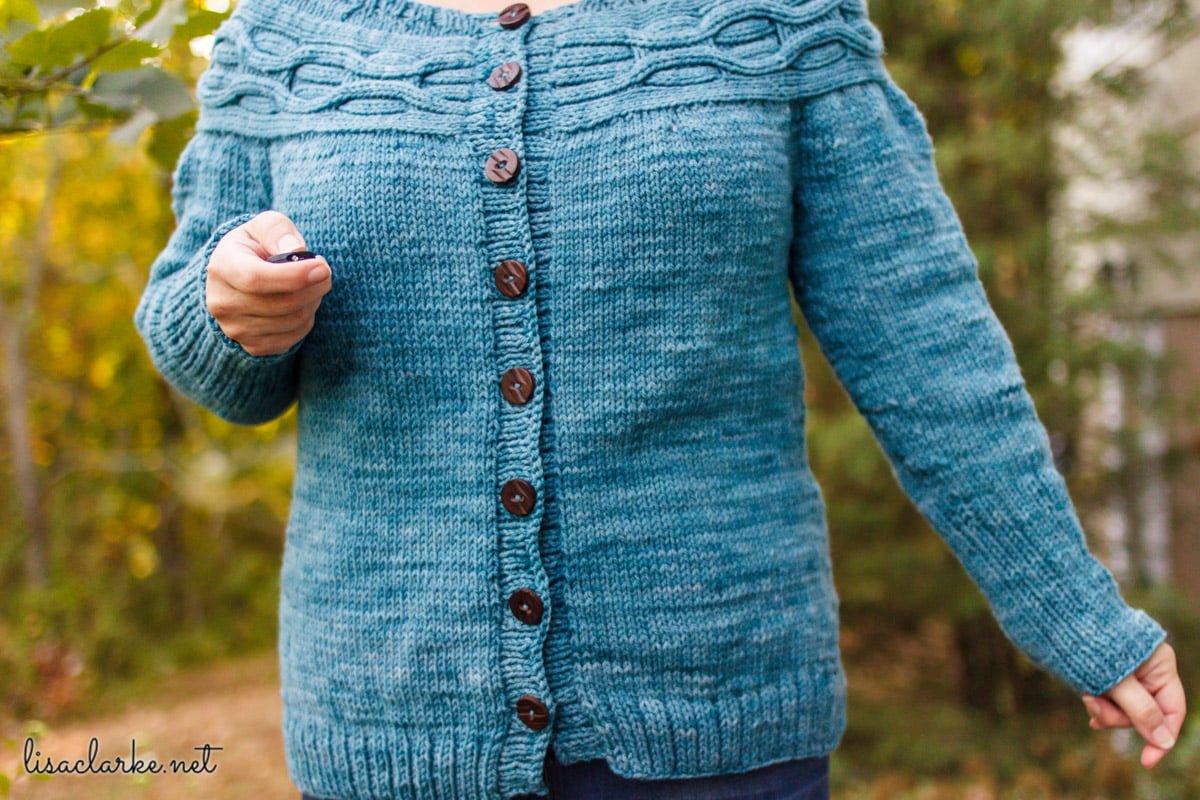 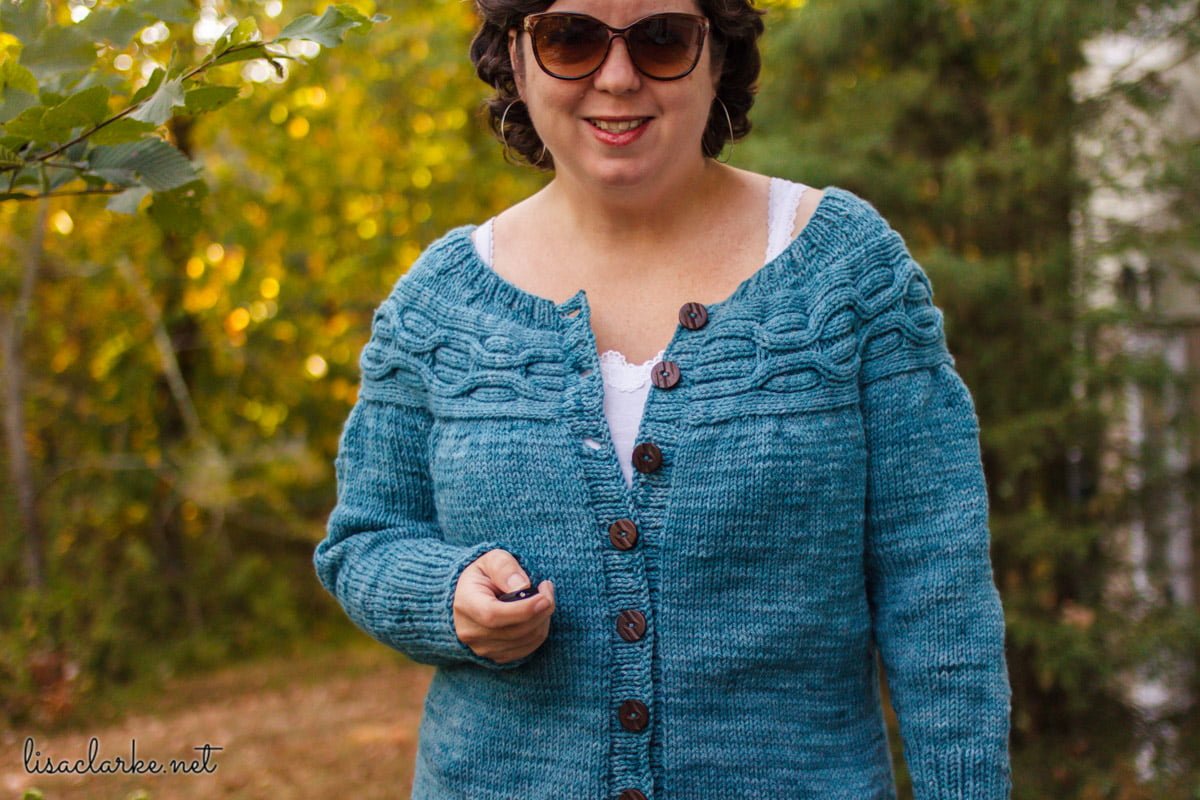 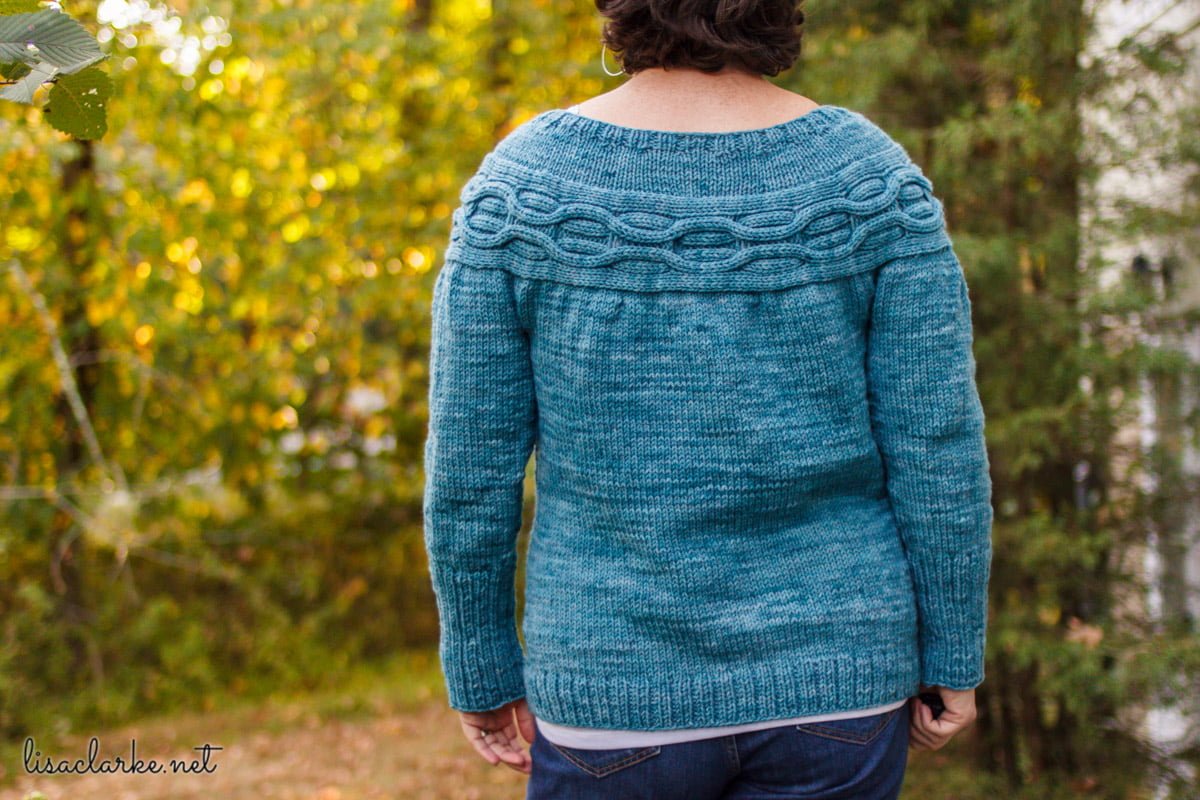 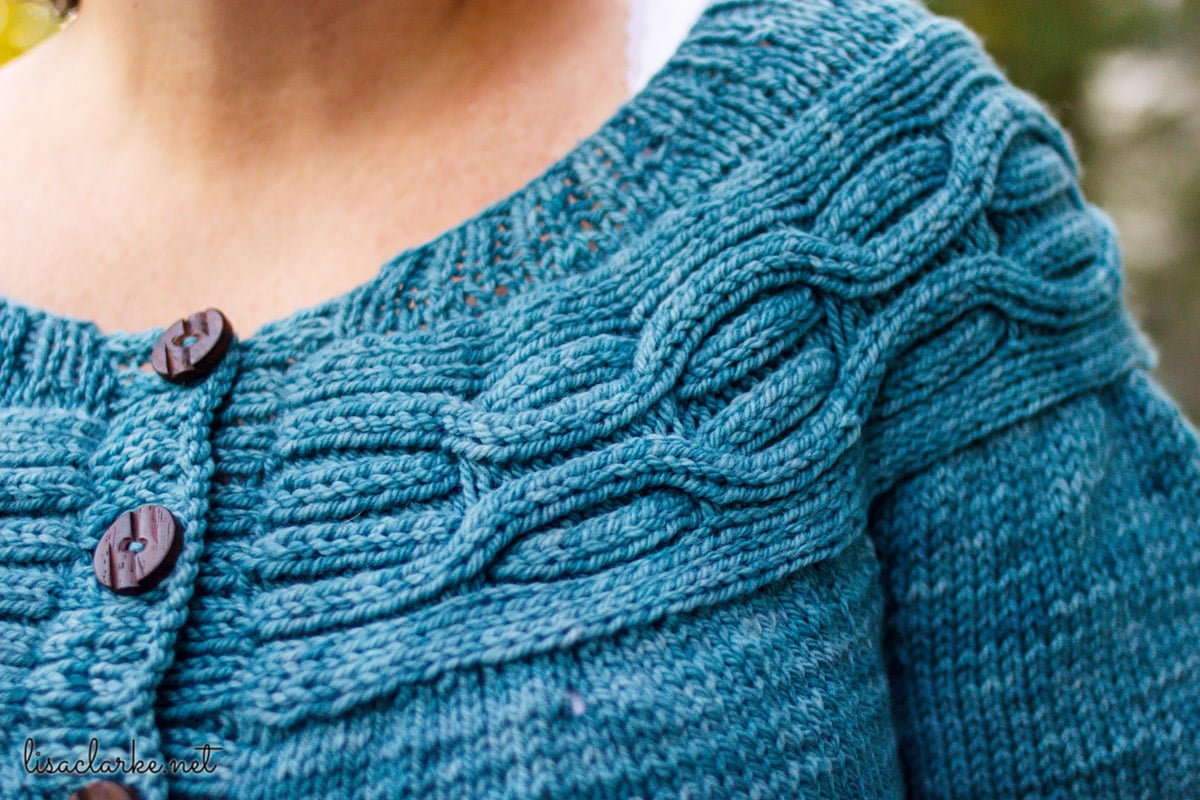 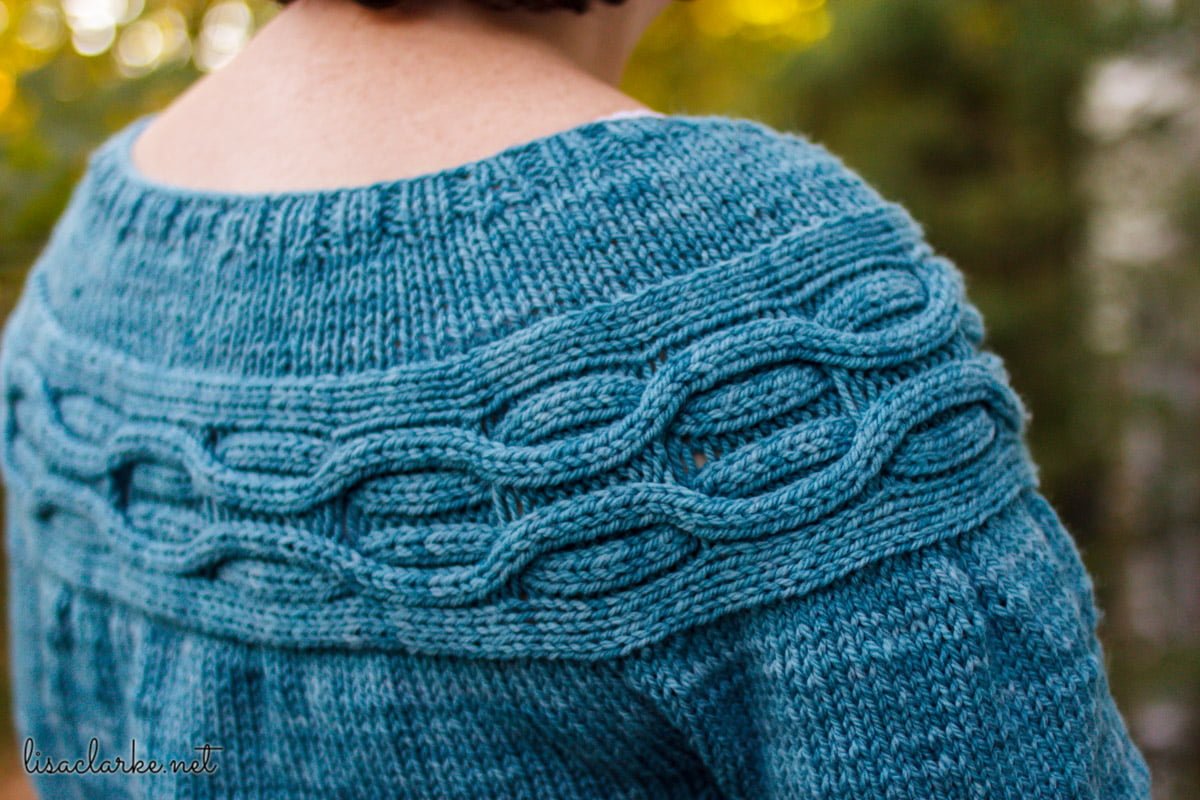 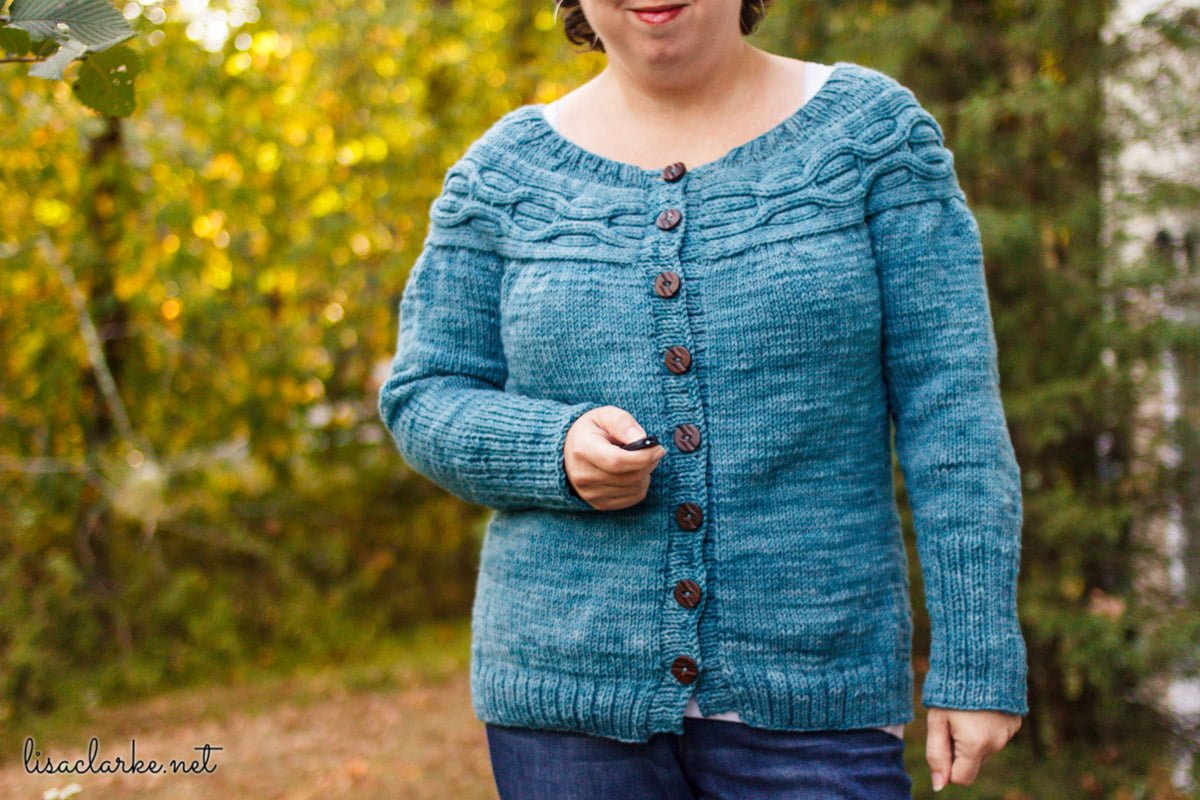 I admit it’s a little early in the month to be completing the September Sweater, but that’s what happens when you get eager and start working on it in early August.

As you may remember, my last two sweater projects (here and here) came off the needles, and were huge disappointments to me. And I mean huge – they were much bigger than I had intended for them to be.

This time around, I decided that no matter how unlikely it seemed, I would accept the fact that I have turned into a much looser knitter than I once was. I would knit a gauge swatch and I would believe what it told me.

It told me to knit this sweater on size 5 needles. The pattern suggests size 8, so I was a little bit skeptical. Still, I used the 5’s and wouldn’t you know it, the sweater fits me perfectly. 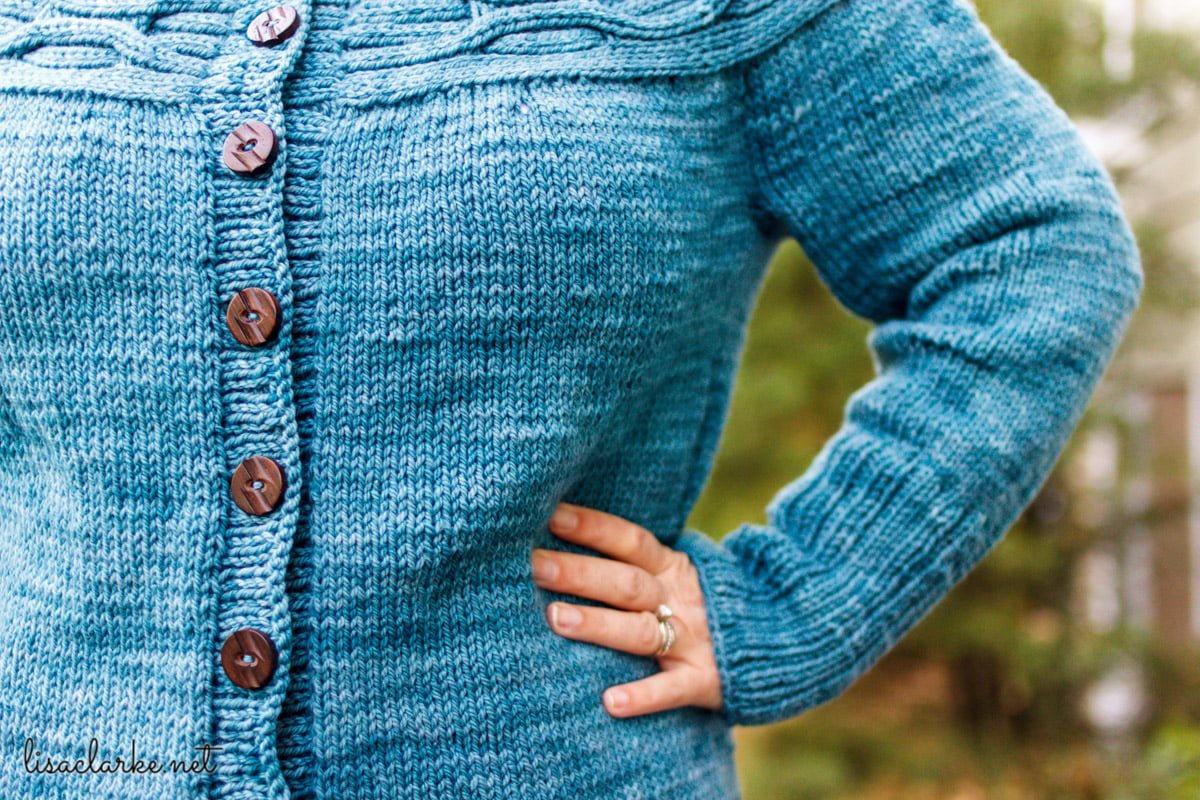 I was a little concerned about doing the waist shaping, as I don’t feel my waist is as well-defined as it could be and I didn’t want it to cling, but I’m glad I did it. I like the more feminine fit, and I still have a little bit of ease in the fit.

This yarn is beautiful. I enjoyed working with it. It was not splitty at all, the kettle-dyed color is just variegated enough to add some depth, and the large skein size meant fewer ends to weave in (and there are already plenty, given how many pieces this sweater is knit in). It’s much more expensive yarn than I usually buy, but I had a gift certificate and I splurged. Glad I did. And there’s still more of it, so I can make a little something else with the leftovers. 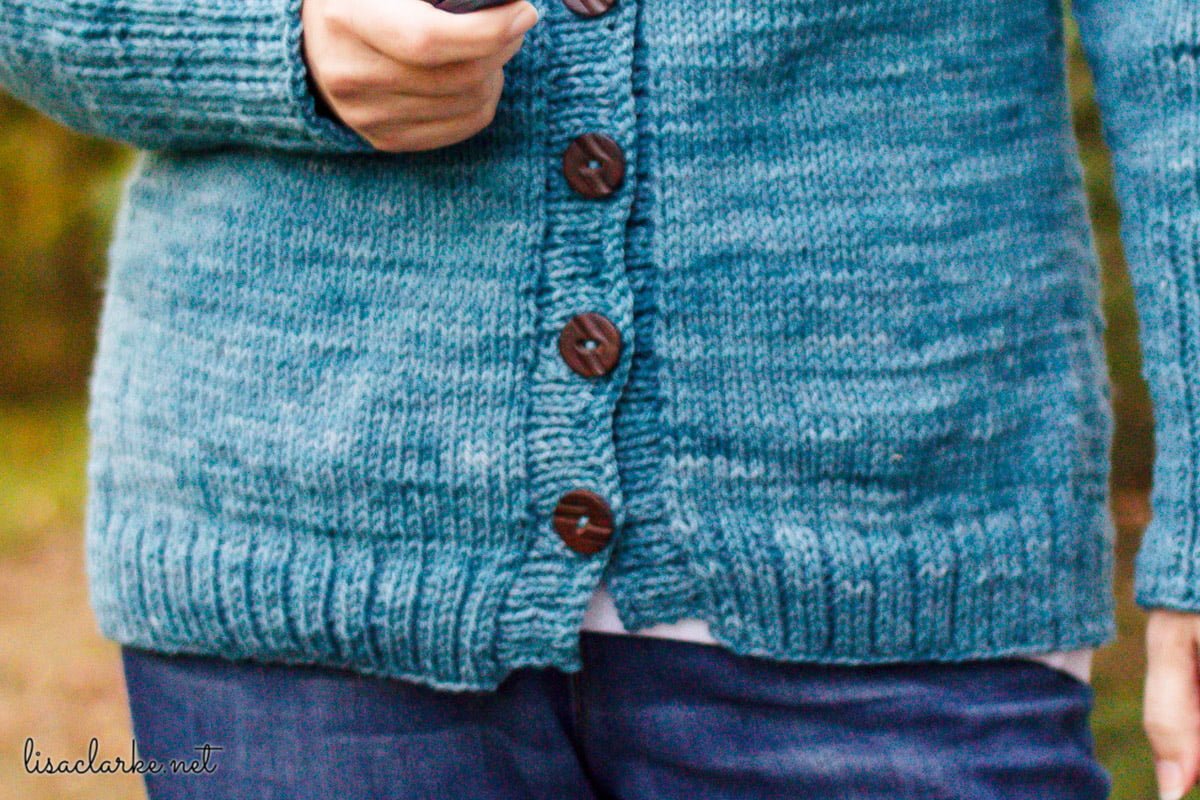 I haven’t blocked it yet, and I was considering not bothering, but if nothing else, I think I need to fix a bit of wonkiness in the button bands. They are both the same size, but you wouldn’t know it by looking at them. That bit at the bottom bugs me.

Of course, being early September and all, I will probably not get to wear this sweater for some time. It’s supposed to be 92°F today, and at least in the 80’s for the foreseeable future. It’s kind of a bummer, but I’m trying to be patient. After all, I spend months waiting for the warm weather to come. It would be crazy to wish it away while it’s here.

I plan on this being my Rhinebeck sweater, although I am considering also whipping up something short-sleeved as a contingency plan – I’ve been to Rhinebeck three times, and the first two trips were warm enough at midday that I’ve had to take off my sweater. Last year, it’s was a bit cooler, and my September Sweater was short sleeved, so I was able to leave it on.

If I had been in the mood to play dress-up this morning, I would have tried it with some other looks. In particular, I’m thinking it would be nice with a wrap skirt and tall boots. 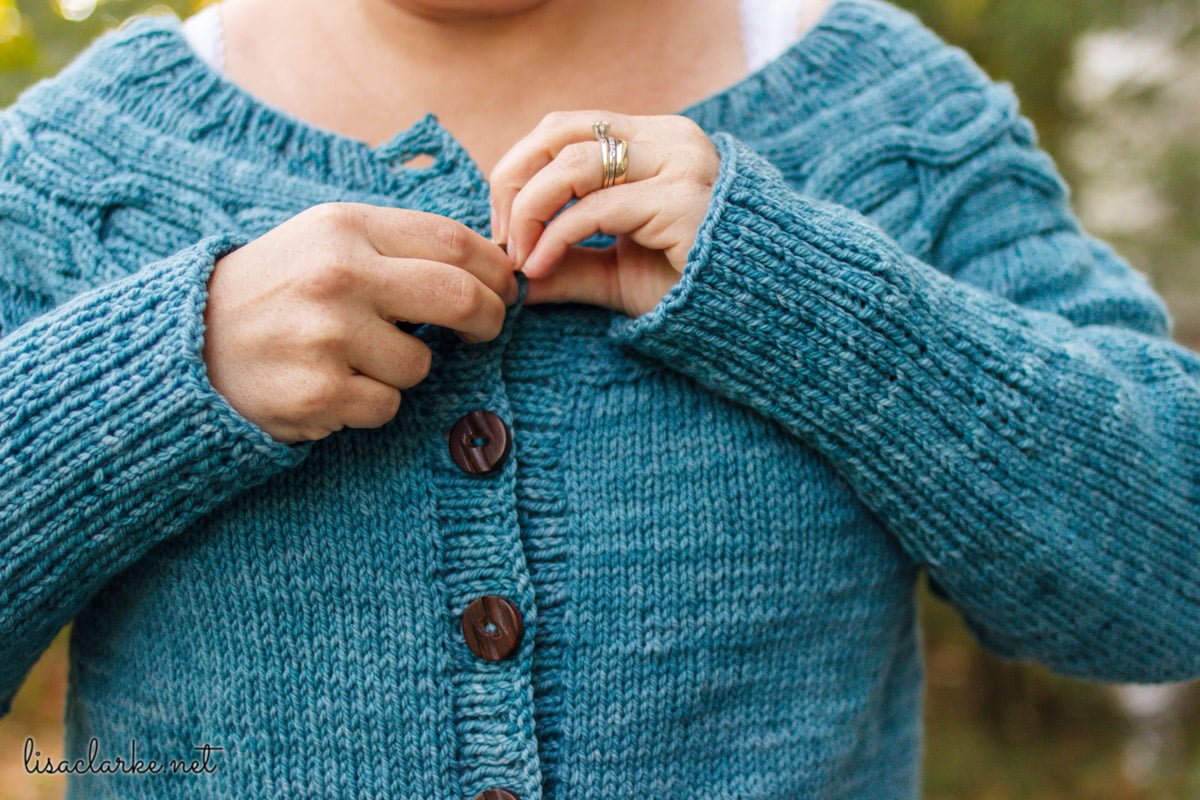 Pattern: Caribou by Tin Can Knits
Needles: Size 5 for almost everything, 4 for sleeve ribbing, 3 for collar and button bands
Yarn: Blue Moon Fiber Arts Targhee Worsted in Big Brain Blue (less than 2 skeins)
Buttons: From my grandmother’s collection
Modifications: I did one fewer decrease row than suggested for the waist shaping, and I knit an inch or two less in the body and in the sleeves. I am apparently short-waisted and short-armed 😜