Here’s part one, in case you missed it.

Do you remember, I had made three out of the seven patterns I’d cut out?

Well, I finished two more of those this week. Plus, I cut out and made four other patterns from two different sheets I’d had in my stash. That’s six garments. I think I’m sewed-out. And even if I’m not, the sewing stuff is going away this weekend because I’m getting really tired of looking at it all over my desk. It doesn’t matter how neatly I stack it, it still feels too cluttered to me!

So, first let me show you those last two patterns from the first set of sheets:

I don’t have much to say about this one. It’s another Sorbetto. I’m wearing it now as I type. It’s fine.

I’ve got a bit more enthusiasm about this second item: 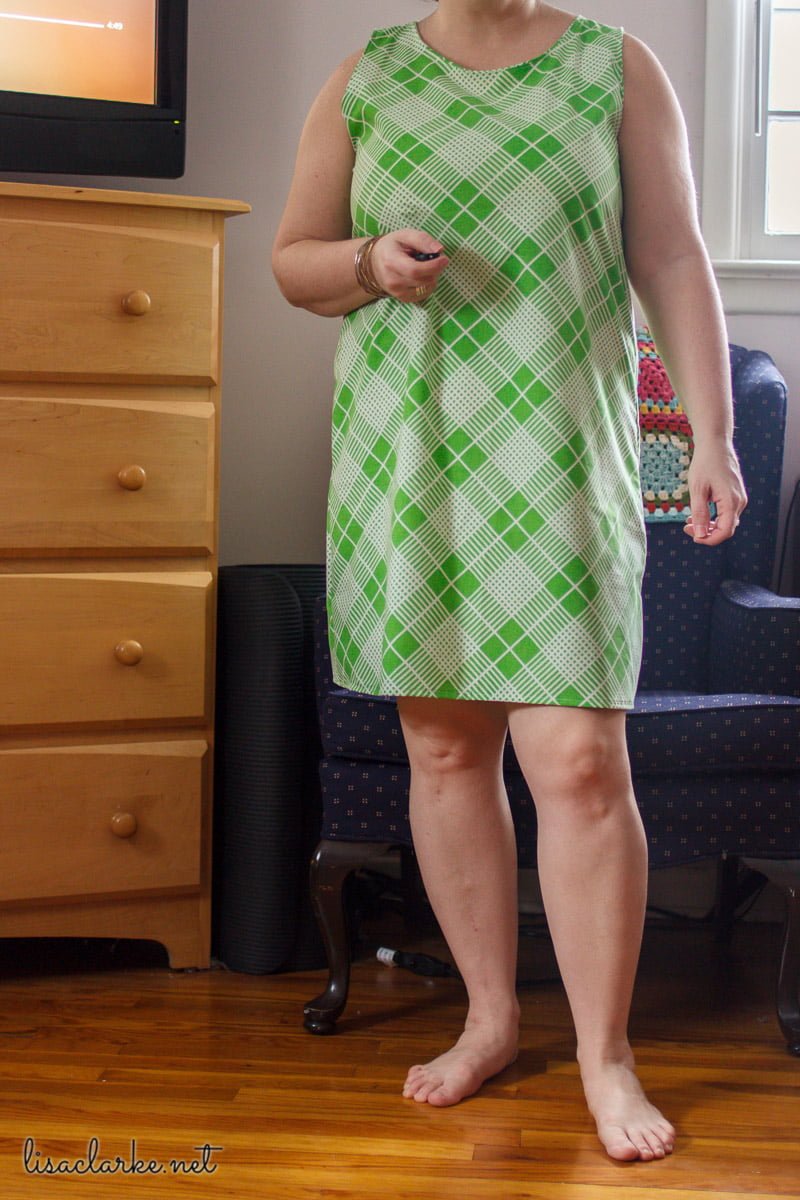 It’s a Barefoot Summer Sheath Dress, which is a pattern I made by backwards engineering a dress that I bought at a place in Ocean City called Barefoot Trading Company. I made a bunch of these last summer, and wore them a lot.

As soon as I saw this sheet, I knew it had to become one of these dresses. During the hottest days of summer, it’s perfect worn just like this, either barefoot or with flip-flops. During the cooler months, though, there are other options: 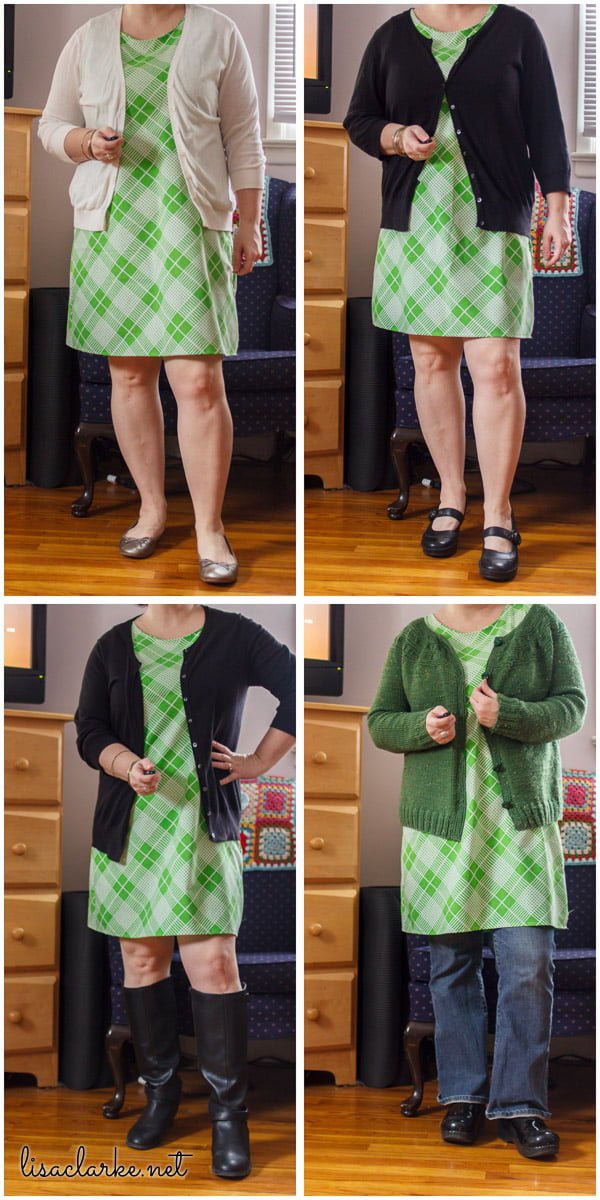 I was pretty excited about the idea of wearing my new boots with it, but both Neil and Aidan were not fans of that look. Pfth.

The bottom right look features jeans and a handknit sweater and uses the dress more like a tunic. It’s an idea I just tried on a whim. I’m not sure I’d repeat it, although it probably would work well for St. Patrick’s Day with all of that green.

There is still another Sorbetto and a pair of Wide-Leg Lounge Pants to be sewn up from the first batch of vintage sheets, but I’m going to set them aside for another time.

The other stuff I sewed this week came about because of a trade I’ve got going with my cousin. She’s getting these two dresses for her daughter, G, and I am getting some goodies that she made. 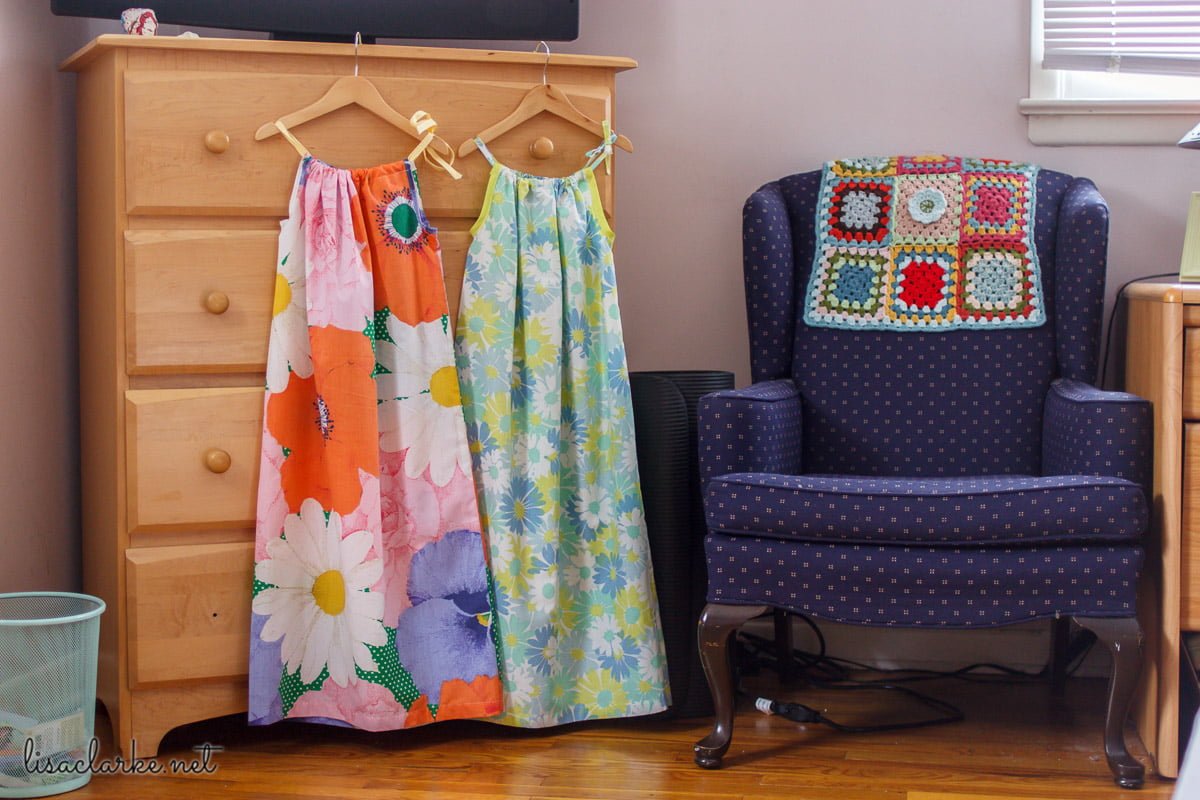 G picked out the sheets from my stash, and I made these two pillowcase-ish dresses for her. I say “-ish” because they are the width of a standard pillowcase, but they are significantly longer. G wanted them long, and she’s a pretty tall kid, to boot.

I think her taste in vintage sheets is pretty groovy and it inspired me to use those same sheets for a few things for myself.

First, and somewhat less-impressive than everything else I’ve shown you so far, is an experiment I tried:

I’ve been wanting to attempt a sleeveless version of Simplicity 3835 for such a long time. In finally figured out a way to do it.

I love this idea in theory, but in practice I’m not particularly happy. For one thing, I need to wear a strapless bra with it, and that is so not comfortable.  In addition to that, I don’t find it flattering.

It’s ok to have a dud in the batch. At least the thing I made with the other sheet makes me happy: 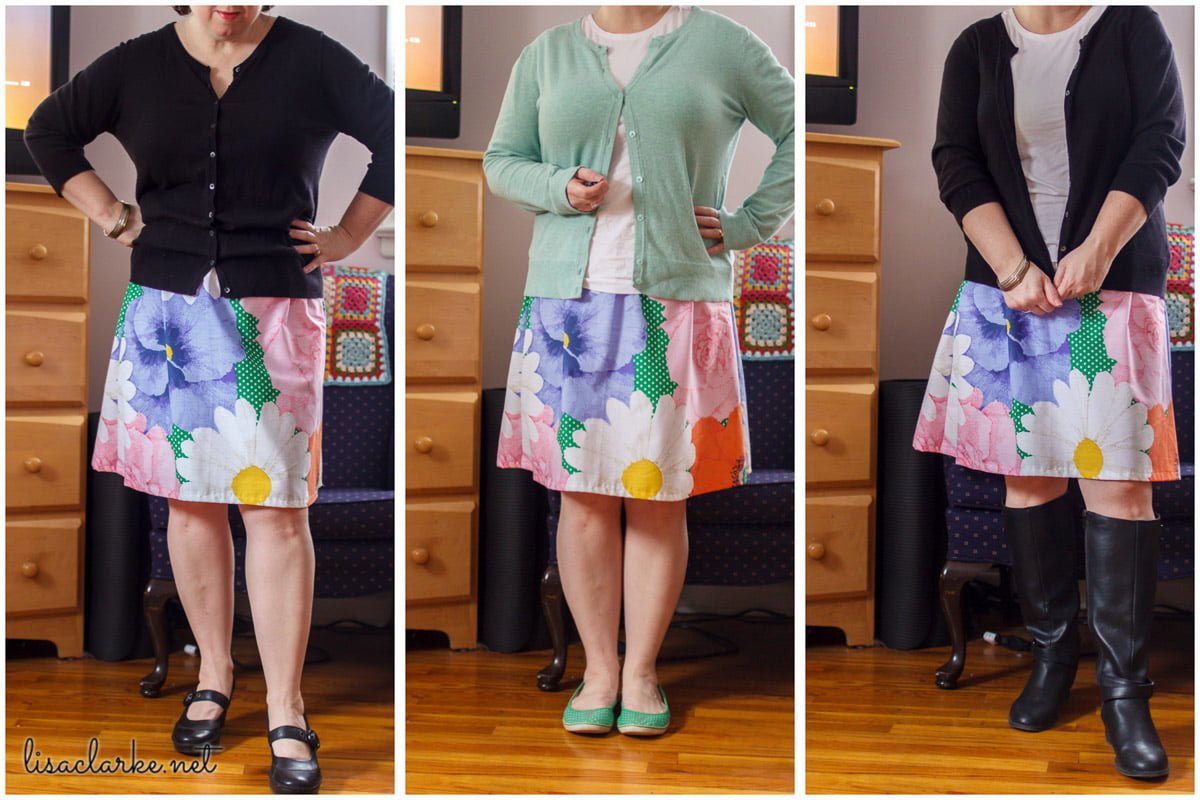 I used my own Easy A-Line Skirt pattern, and I love it! Those gigantic flowers are perfect for skirt-wearing.

Of the nine things I’ve sewn in the last two weeks, this one was by far the easiest, and quite possibly my favorite.

In particular, I really love this look:

I wear fine-gauge sweaters all. the. time. but always over a shirt, and usually open in the front. I decided to try this one all buttoned up without a shirt under it, and I really like the way it looks.

And those shoes? I had an eBay alert set up for those shoes for seven years before a pair showed up in my size. Technically-speaking, I was looking for a different color, but I gave up and went for the black when they became available. Who knows how many more years I’d have had to wait for the brown-and-red ones?? I haven’t had a chance to wear them yet, but they are so comfortable (a rarity with heels, as far as I’m concerned). This outfit is definitely coming with me when Neil and I go away for our 20th anniversary next month.

I feel like maybe I should have broken this up into three posts instead of two. I did rather go on and on and on here. Congratulations for making it all the way to the end!