I spent my Saturday morning as I often do: sipping a hot beverage and reading something interesting. Often it’s Awake tea and blogs, or some other kind of tea and a good book, but today it was coffee and Artful Blogging.

I love that magazine. I wouldn’t say that the articles are all that ground-breaking. In fact, I often think that if I read one more “How Blogging Changed My Life” or “We’re All Part of Such a Wonderful Community Where Everyone Shares and Cares” article I might scream (even if I do sometimes share those rosy feelings myself). For me, the beauty of Artful Blogging is in the photography. I do still read the articles, but it’s generally the author’s images that grab me first, and the words second.

So this weekend, I was flipping leisurely through the current issue, stopping now and then to follow somebody on Flickr or Instagram as they caught my eye, when I was stopped dead in my tracks by this: 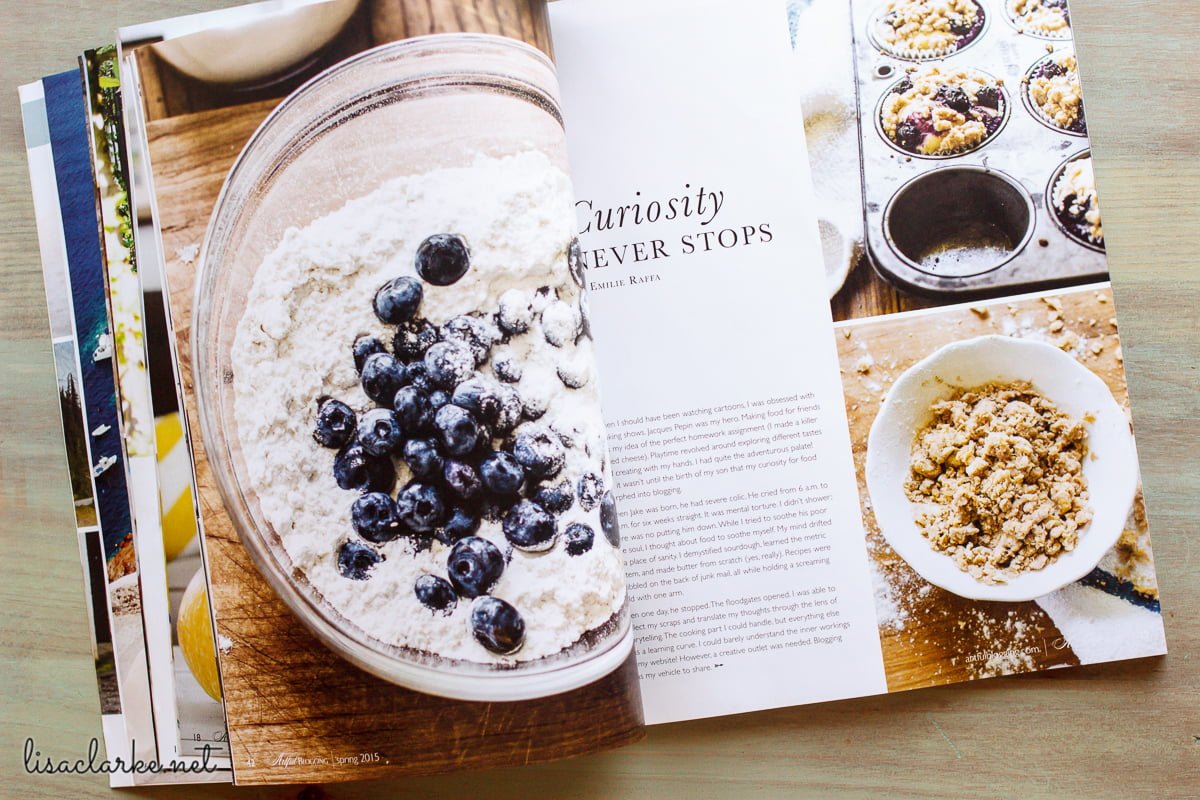 I was suddenly struck by this intense need to bake a berry crisp.

Now, let me tell you how unusual this is. For one thing, Saturdays rarely see me dressed before Noon. For another thing, my cooking and baking mojo were last seen somewhere in 2011, I think, and these days my oven is primarily a vessel for curing polymer clay crochet hooks or heating up frozen french fries.

And yet, here I was, 9:30 in the morning, hopping in the shower, getting dressed, and throwing on an apron to bake something that I wasn’t required to bake. And I was doing it with enthusiasm, as opposed to resignation.

I put on some Innocence Mission, which for some reason I can’t explain, feels like baking music to me.

I took a bunch of pictures, because from the moment I found myself showering before lunch time on a weekend, I knew I was going to blog it. 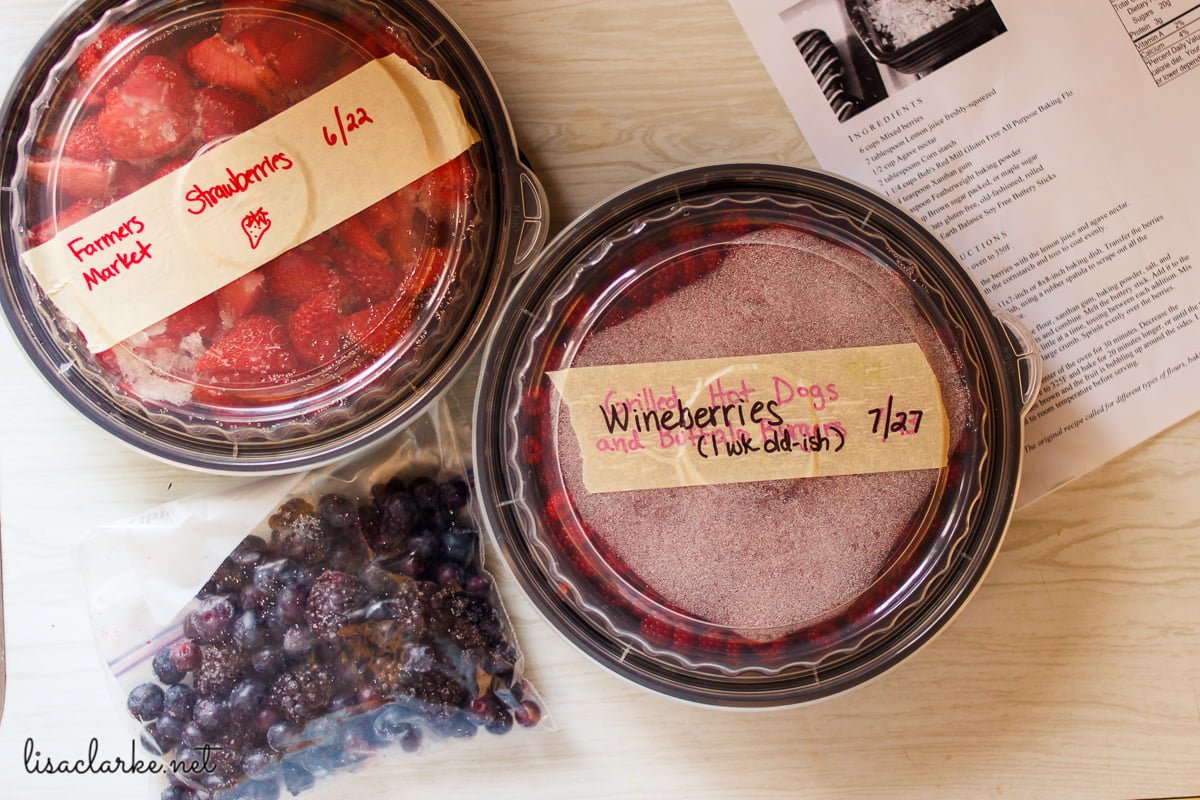 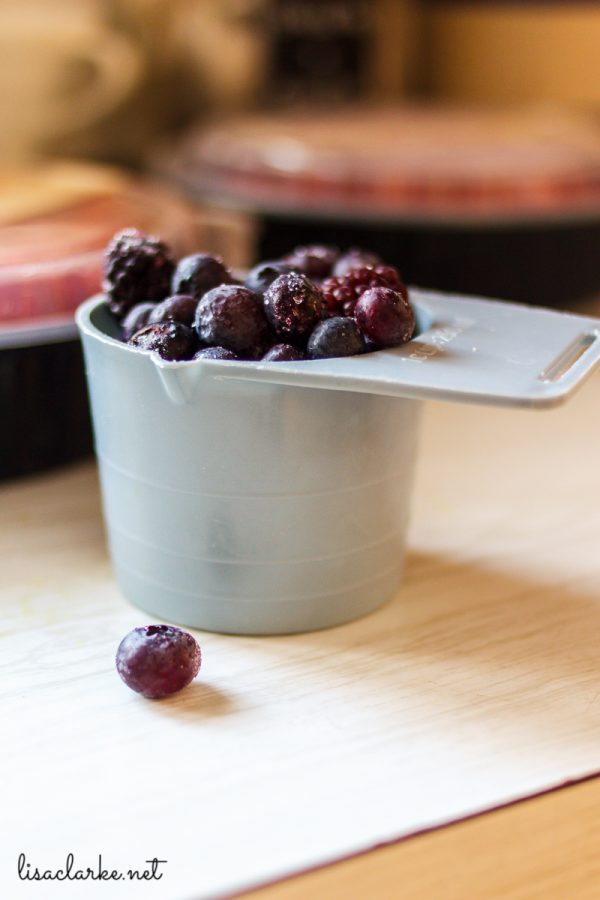 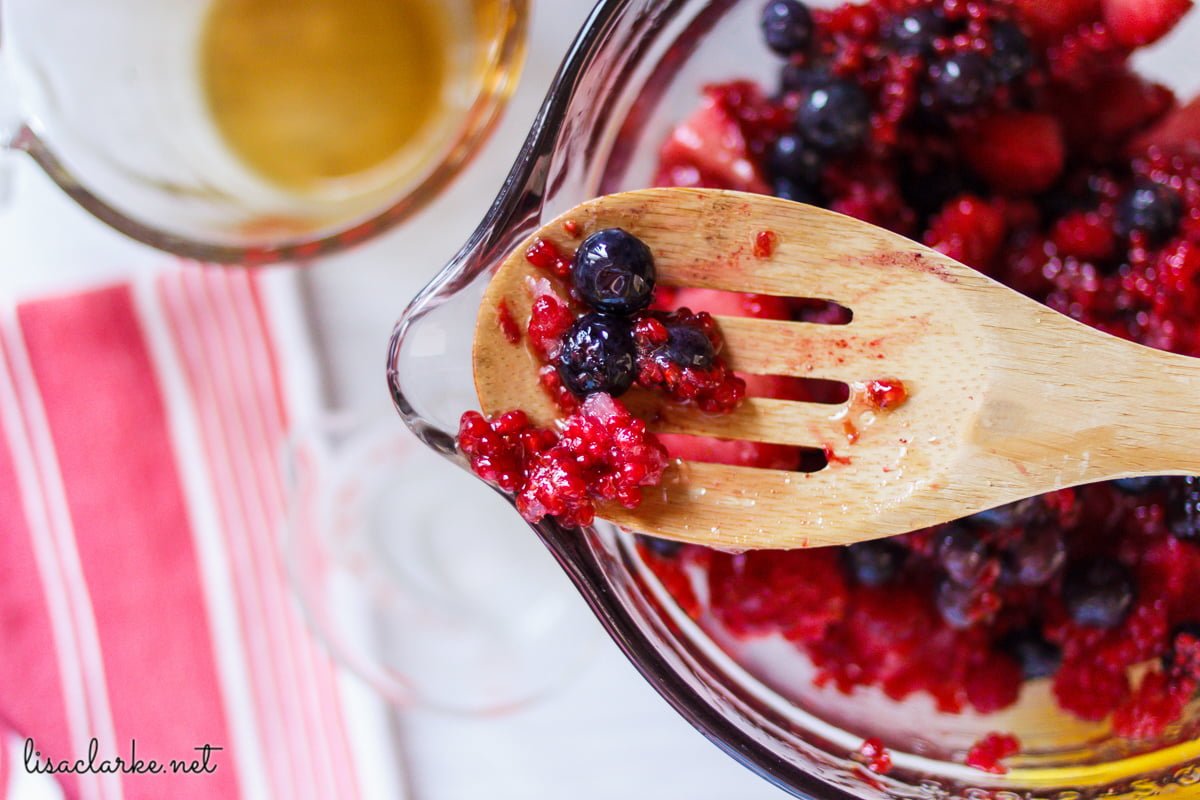 You realize just how worth-the-effort it is to squirrel away a handful of Summer berries, when you are standing in your kitchen on the last day of January, holding a freezer container to your face, and breathing in the smell of the farmer’s market from seven months before. Oh, those strawberries – so fragrant!

Along with the strawberries, I had also saved a small bag of farm market blueberries and blackberries, and some wineberries from the yard. Six cups of luscious Summer fruit went into the bowl.

I returned what was left of the strawberries and the wineberries to the freezer, and got to work on my crisp, snapping pictures, and humming along to the music.

What a lovely morning. And at the end of it, I had a rare Winter treat that I didn’t have before.

I even cleaned up after myself promptly, before the dishes could get crusty with dried oats and sticky juices. That is something that happens somewhat less frequently than it should… 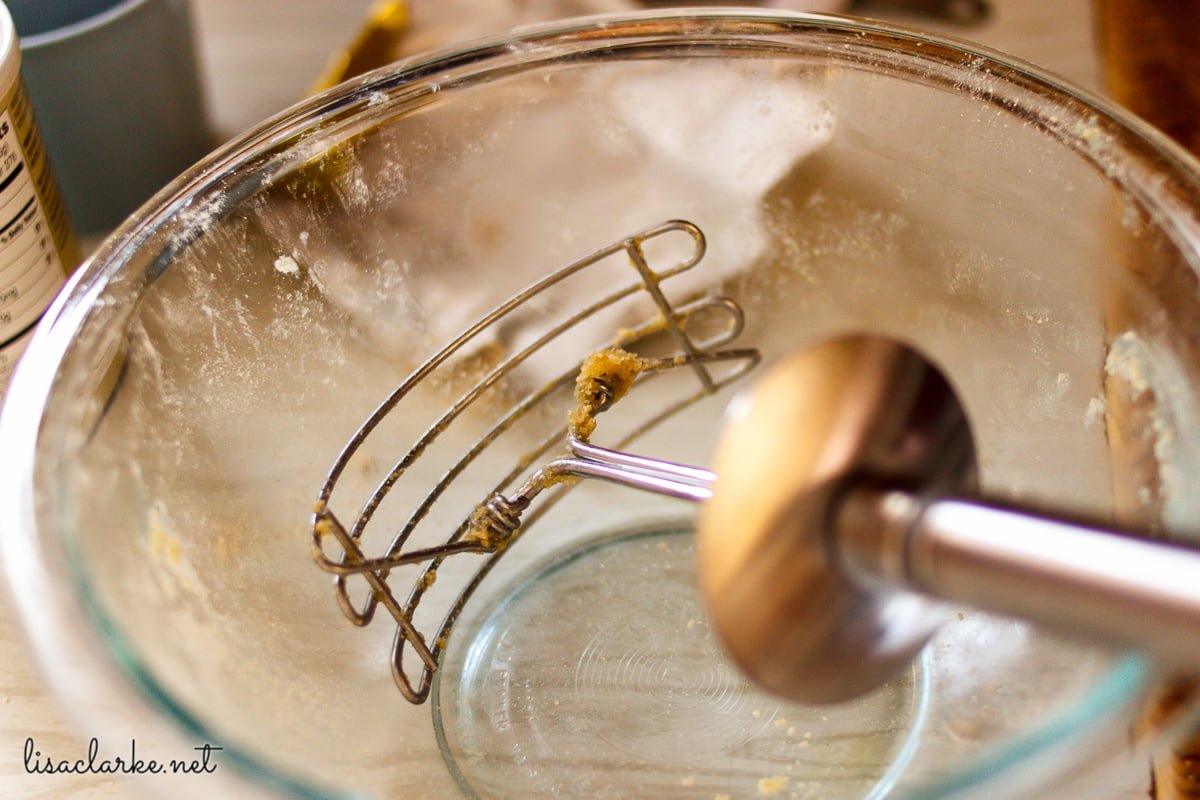 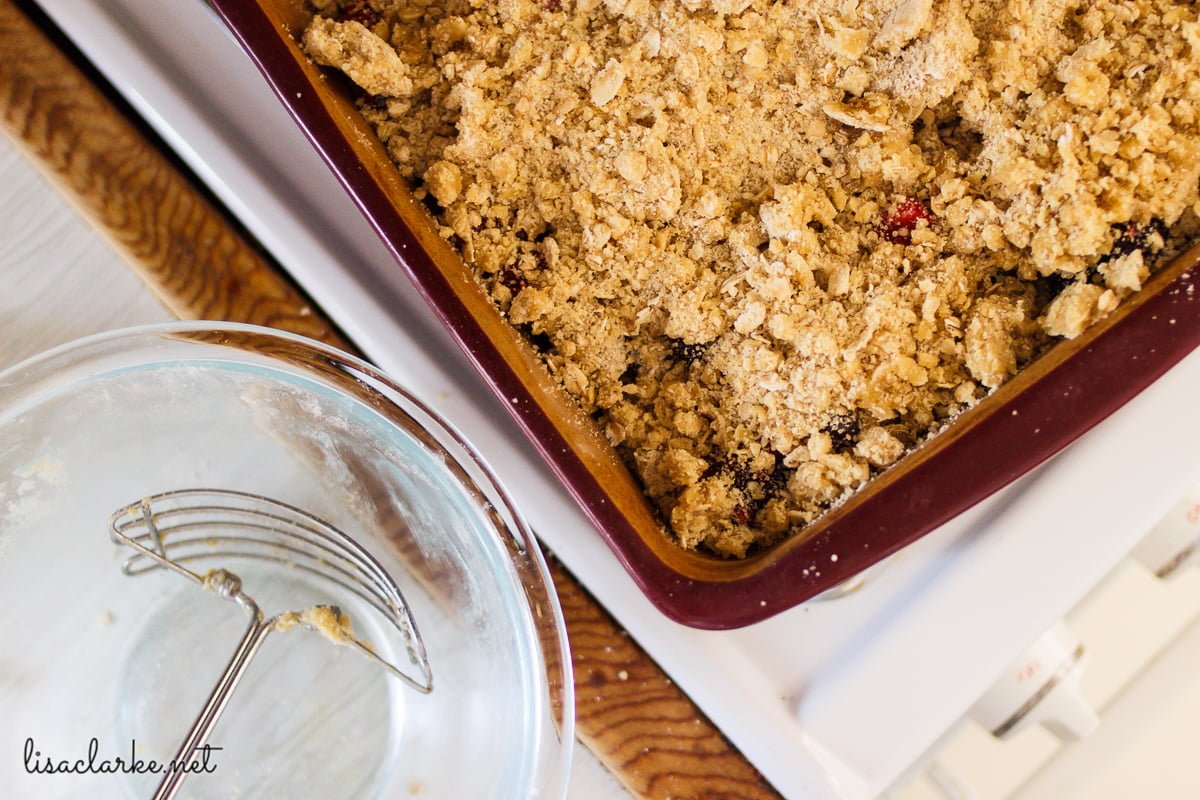 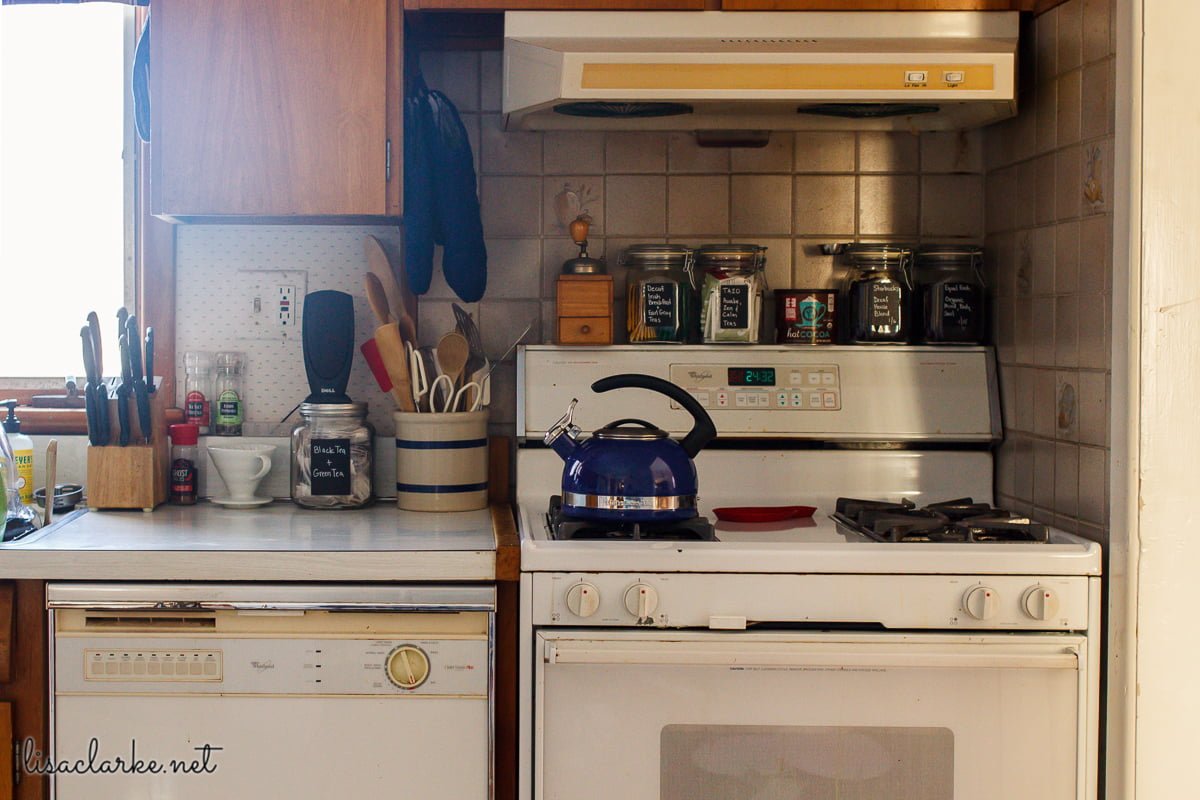 Do you spy my new kettle? When I asked for your tea kettle advice recently, I had not realized it would spark a week of such angst for me. I spent days upon days dithering over such questions as: electric or stovetop? glass or stainless steel? gooseneck or regular spout?

And then I pulled myself together, realized I was not trying to do anything more fancy than boil a damn pot of water, and ordered pretty much the same thing I had before. Which had always done a fine enough job for me. 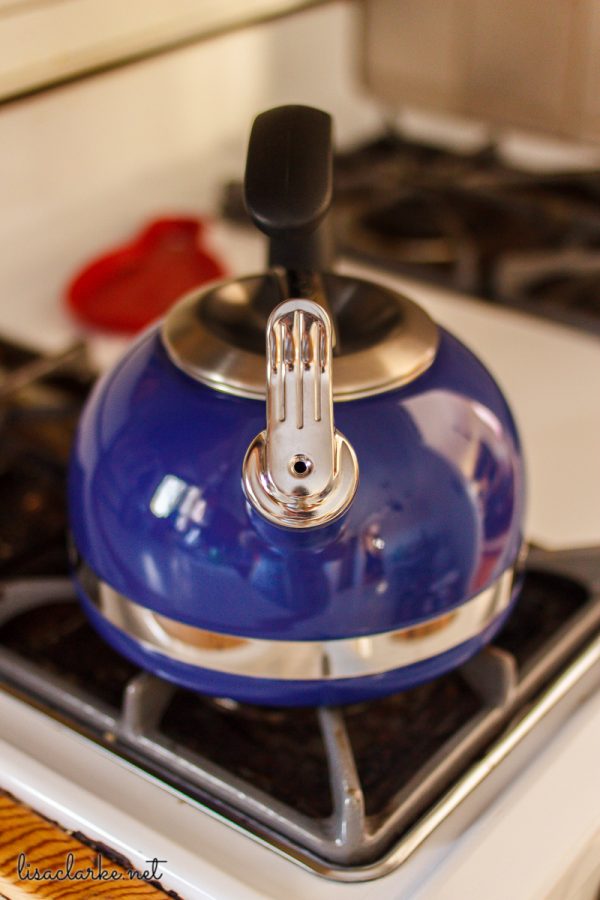 I bought a blue one. I consider the main color of my kitchen to be blue with pops of red accents. I’ve aquired so many red things over the years, though, that I think the kitchen was starting to look like it was red with pops of blue accents instead. This kettle is one step toward restoring the balance of color power around here. And it boils water pretty well, too, so there’s that. 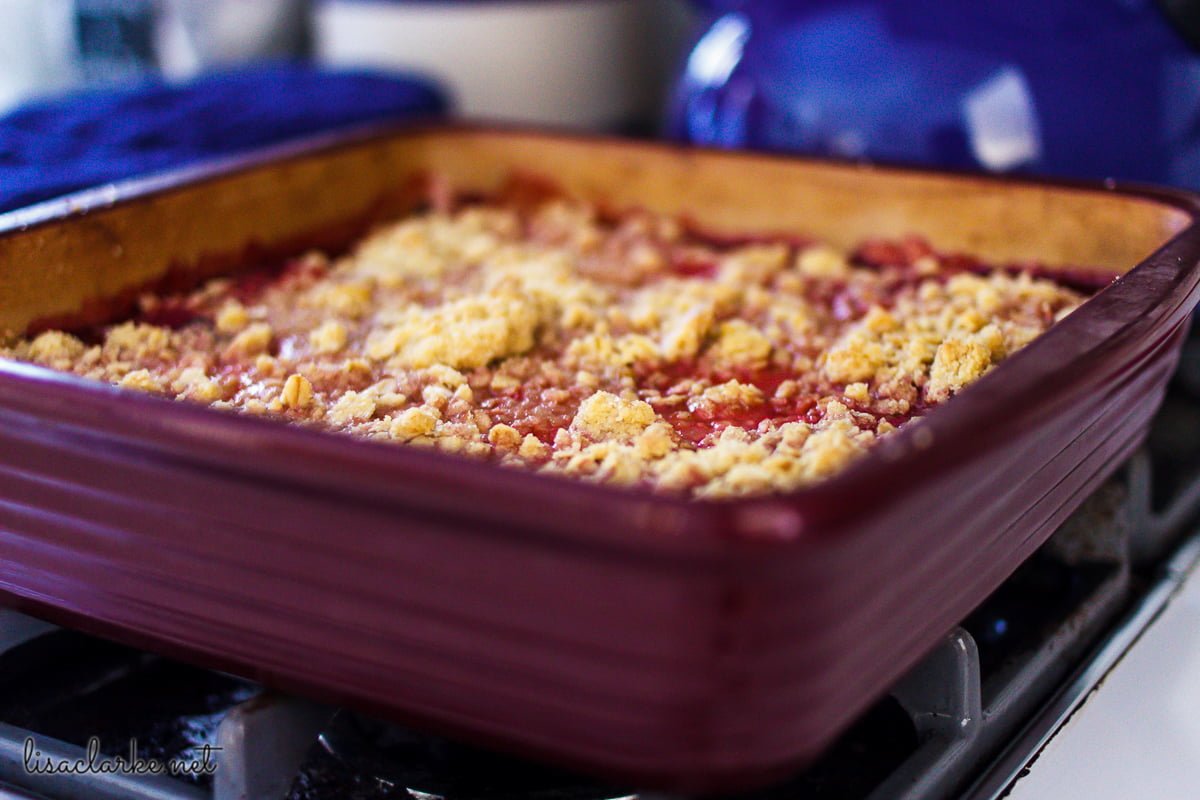 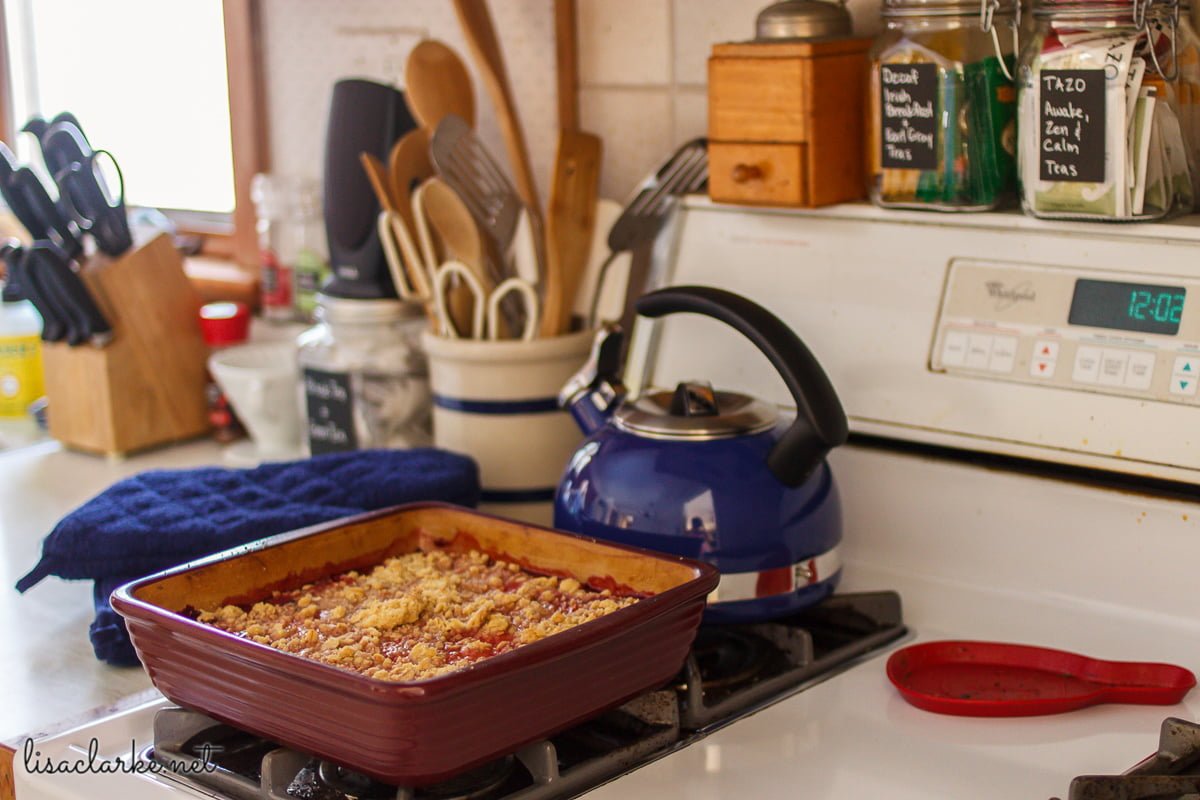 As it happens, my kitchen inspiration this weekend came at a very good time. My parents were visiting in the afternoon, and I actually had a little something homemade to offer them, instead of my original plan: standing in front of the refrigerator saying “ummmmmmm?” until we all decide we weren’t really hungry anyway. 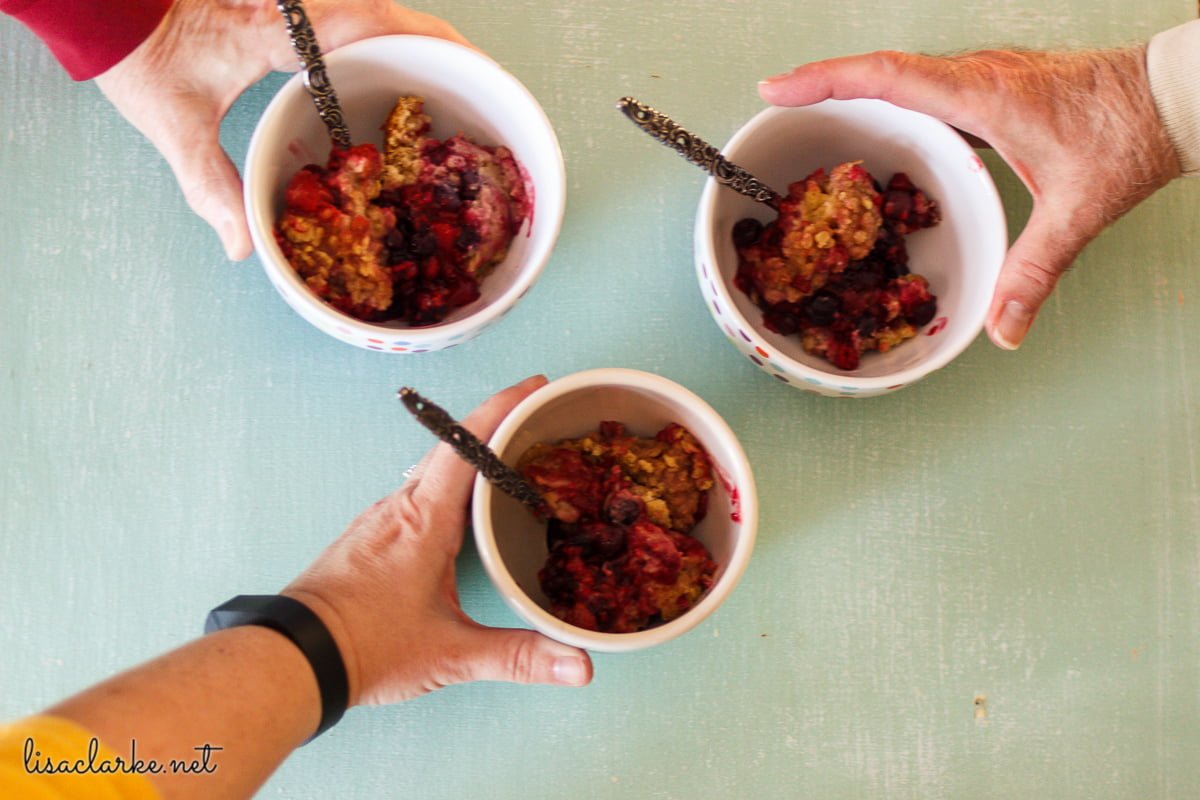 P.S. Just in case you have a stash of summer berries and have also had a sudden urge to bake, here’s my recipe (although I used strawberries instead of peaches this time – it’s very versatile – use what you have!).

P.P.S. The images that caught my eye in the magazine were from The Clever Carrot and it appears that they came from this blog post for buttermilk blueberry muffins.

4 thoughts on “Summer in Winter”