Do you remember last week when I said that I was going to try to also include my Instagram favorites? Well I figured out how to do it, but there was something I didn’t take into account: I favorite things very differently on Instagram than I do on Flickr.

When I favorite an image on Flickr, I do so specifically with the intention of sharing it here. If I like something but don’t consider it appropriate for the weekly mosaic (for whatever reason) I will choose to comment on the image rather than favorite it.

But on Instagram? Well, I am very free with the little heart button. I tap that thing for anything and everything that catches my eye for whatever reason, regardless of whether it meets the criteria for Weekend Favorites. That type of behavior is not going to work on a weekly basis. Just take a look at what this week’s mosaic would look like if I used all of the Instagram photos I liked:

Admittedly, this has been a very active Instagram week for me, and it won’t always be like this. But still. I’m re-thinking the sharing the Instagram favorites. That’s just Crazy Town!

You need many fewer images, if you have any hope of appreciating the beauty of them. They’re just too mushed together this way.

For now, let’s just stick with Flickr as usual…

The mosaic below represents other people’s pictures that spoke to me this week on Flickr. Click on the titles below the mosaic to get a better look at the images and see more from the photographers who made them. 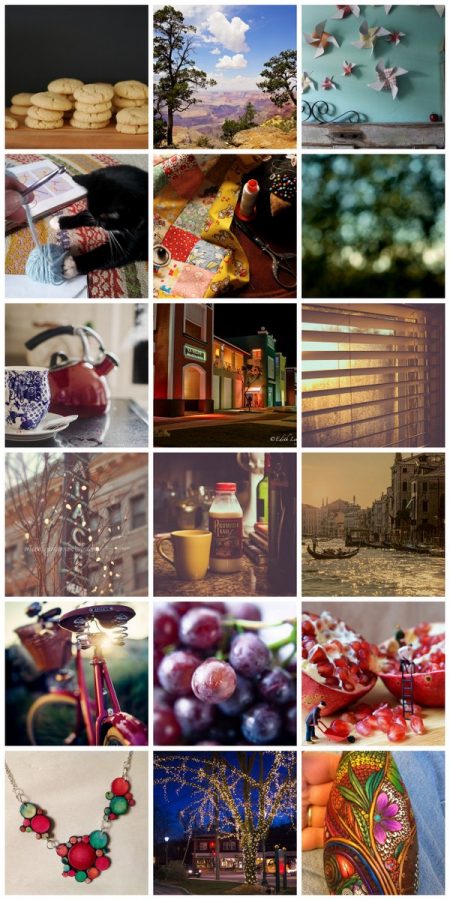 Here are a few interesting things from around the web that grabbed me this week:

I will have to think about whether I want to change the way I do favoriting on Instagram so that I can include those images here, too, or whether I’ll just keep things as-is and stick with Flickr. Or, maybe I can come up with a third option. It’s something to think about anyway.

Have a lovely Friday!