Aidan and I took our third trip to Rhinebeck together last weekend, and as usual, it was a nice getaway.

We put ourselves up at the Ramada Fishkill this time. We end up in a different hotel each year. There’s a big cluster of them in Fishkill, which is about 45 minutes south of Rhinebeck, and it’s a great location for us to stay. It’s about an hour and 20 minutes from home, so we hop up there on Friday night after dark, but we don’t have to feel bad about not seeing any scenery on our way, because the next day it’s a beautiful 45 minute trip up Route 9 to Rhinebeck.

We always use Priceline to get our hotel (you can get good deals through Priceline, but you don’t know the name of the hotel you are staying in until after you commit to book it – usually that works out just fine, but sometimes not so much). The first year we ended up in an Extended Stay America. Aidan and I gave that place an enthusiastic thumbs down, both for noise level and creepiness factor.

The second year, we stayed at a Days Inn, which was about what you would expect. It was fine for our needs.

This year, we got the Ramada, and I will admit to having a mini freak-out on Friday afternoon when I happened to notice that Tripadvisor ranked the Ramada Fishkill #11 out of 11 Fishkill hotels. I was on the verge of cancelling and finding somewhere else (for more than double the rate, I might add) when sanity finally prevailed. I decided to cross my fingers and hope that the rest of the internet was just more picky about hotels than I am.

It became kind of a fun inside joke for us, actually, to be staying at “the worst hotel in Fishkill.” Aidan started referring to Fishkill as Buzzkill, which we both found rather hilarious.

And in the end? Sure the place was a bit run-down, and there was a giant crack in our window, which was being held together with packing tape. There were strange smells, and the shower was vintage 1982, but it was clean, and it wasn’t creepy. I’d actually rate it higher than the first place we stayed two years ago.

So it’s official. The internet is more picky about hotel rooms than I am. 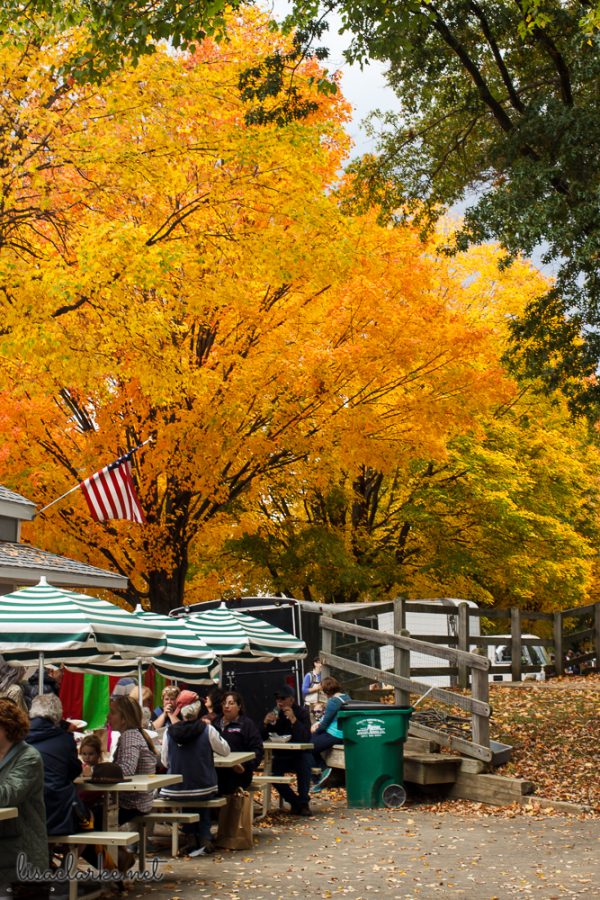 It was a gorgeous Saturday at the festival itself. It remained overcast and cool all day long, which is just perfect for an event where wearing a handknit sweater is part of the fun.

We shopped all day. It was mostly window shopping – I am not the “spend with wild abandon” type – but we did buy the requisite maple cotton candy, a circular needle roll, and some Christmas gifts.

And of course… yarn.

The first two times we went, I had a goal of buying a batch of sweater yarn, but this time I didn’t want to spend that kind of money. In the past year, I’ve taken advantage of some crazy amazing sales on yarn at Craftsy, and so I already have a couple of sweater-sized batches of yarn in my stash.

This time, instead, I focused on getting yarn for a red cowl, and then I also picked up two other single skeins that caught my eye.

I imagine you are not surprised by the colors I chose?

I anticipate feeling like my red cowl is more suited to November and December wear, and so the variegated green/blue/brown is likely to become a post-holidays cowl. But maybe it won’t. I’m open to ideas.

The mostly pale green yarn may become a hat. It may also become two baby sweaters for some people I know who are having babies, but I kind of hate to gift a new mother with something that is not machine washable, so maybe not. Again, I’m just going to wing-it.

I have a history of stashing yarn like this: single skeins I bought because they were pretty, or because they felt soft, but I had no plans for them, and so they ended up stuffed in a bin. I really don’t want that to happen with these!

To that end, I’ve added them to my Ravelry stash. I don’t usually use the stash feature there, but I figured I would be less likely to forget all about these gems if they were constantly being suggested to me while browsing patterns at Ravelry. We’ll see how that goes!

On the way home on Sunday, we stopped at a scenic overlook. “Scenic” is not sufficiently descriptive for this spot.

Great weekend as usual! We’re already looking forward to next year. Maybe next year I’ll actually get up the nerve to approach people I recognize, and say hello!