I tried twice before to embrace the green smoothie thing.The first time, I found them utterly boring, and I had trouble getting past the fact that my breakfast was entirely liquid. I wanted to bite into something solid.

The second time I started with a hard-core green smoothie recipe. I was all set to do a cleanse and everything! But that same day, Neil lost his job, and I lost my enthusiasm for trendy drinks with expensive ingredients. Honestly, though, the expense of it all was more of a convenient excuse than anything else – that cleanse-friendly smoothie tasted absolutely terrible to me.

It’s been about a year and a half since that second attempt and I’ve been doing the smoothie thing again. This time I’ve kept it up for a couple of weeks and >gasp!< I really love them! 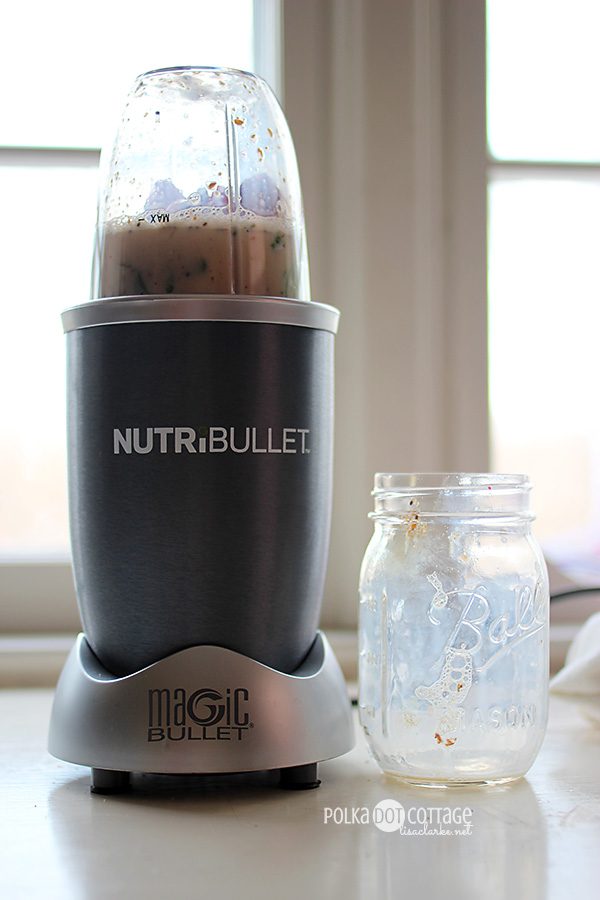 So, what have I been doing differently?

Well, first, I spent my Christmas gift cards on a Nutri Bullet.

Part of the problem before was with my old blender. For one thing, it didn’t have the power to properly pulverize the greens, and for me, being able to taste the greens is a big deterrent to actually drinking the smoothie. For another thing, cleaning the blender every day was super annoying. Anyone who has dropped by my house unannounced and had a peek at the kitchen sink will tell you that washing dishes in a timely manner is not my forte.

So, the Nutri Bullet: it grinds up those spinach leaves so fine, I barely know they’re there. Excellent. Also, I just rinse the cup and the blade mechanism with warm water and set them on a towel to dry. Easy peasy. Plus, it comes with three cups, so if warm water doesn’t easily do the trick, I can set it aside to wash later and still have a clean cup ready for tomorrow.

The other key to my smoothie success is peanut butter.

I use the all-natural, no sugar, no salt, just 100% peanuts kind, and my shake comes out tasting like peanut butter ice cream. Now that’s a taste I can get behind! (I get my peanut butter at Trader Joe’s, but if you need an online source, I found this brand that is also made with 100% peanuts. I’ve never tried it, but it has good reviews.)

There are all kinds of recipes in the Nutri-Bullet documentation, and I did try one of them, but I am discovering that I really need a milky base (as opposed to a watery base) in order to like it. And I also need it to be a wee bit sweetened. Over time, I hope to wean myself off of added sweetener, but for now it is a necessary component.

Here’s my recipe, which I am continuing to tweak (I measure out this recipe in a pint-size mason jar):

In order to save time in the mornings (and help the ingredients last longer), I’ve started pre-filling a bunch of mason jars and putting them in the freezer. In the morning, I grab a jar, dump it into the blender cup, add the milk/syrup, and am good to go.

As I said, I’m still playing with the recipe. All of this is still new enough to me, that I don’t really understand what kinds of add-ins will benefit me the most. I’m using the flax/chia blend mentioned above, and I’m thinking of trying matcha green tea powder. My gut tells me to stick with fruits and greens as much as possible, and avoid relying too much on powders and such, but I’m open to trying new things, particularly if they don’t impact the flavor of the smoothie too much.

I’m going to have to work up to that earthy, grazing on the front lawn kind of taste. I’m not quite there yet.

So, tell me, do you drink green smoothies? Do you have any ingredient suggestions? Tips, tricks, or other ideas?

P.S. There are affiliate links in this post, but I’d have said all of this even without them.