I have to start this post by saying how cool you all are. Finishing a sweater project and getting to wear it on crisp, Fall days is exciting enough, but then to also get to read your flattering comments? Well, that just makes my day. So thank you for that!

One of the things that I am most proud of with that sweater is the buttons. It’s kind of funny, when you think about it. The sweater took a month to knit, the buttons took at most an hour to make, and that‘s what I’m harping on. The buttons. Oh well, you can’t choose your obsessions really, can you? Might as well go with it.

And go with it, I did. Remember I told you that I want to show you how to make the buttons yourself? Well it occurred to me that it would be a much more useful tutorial if I told you how to adapt the technique for a few different types of yarn. So what was going to be “Tweedy Buttons” has become “Yarny Buttons,” with explanations for making woven polymer clay buttons that resemble tweed yarn, heathered yarn, and variegated yarn.  Cool, right?

Yesterday I cooked up the eBook cover, which is great, except there’s one little thing I still need to do in order to get the eBook ready…

I have to actually write the tutorial(s).

Talk about putting the cart before the horse, eh? It’s just that playing with Photoshop is more appealing to me than writing, at the moment. I’ve got plans to set aside big chunks of time for tutorializing this weekend, so it will happen. Just don’t quote me on when it will happen.

I’m thinking three separate posts (all freebies), with an available eBook (not a freebie) for those who want it all together in a nice portable format for their mobile devices.

But I’m getting ahead of myself again 🙂 Let me show you what I did yesterday: 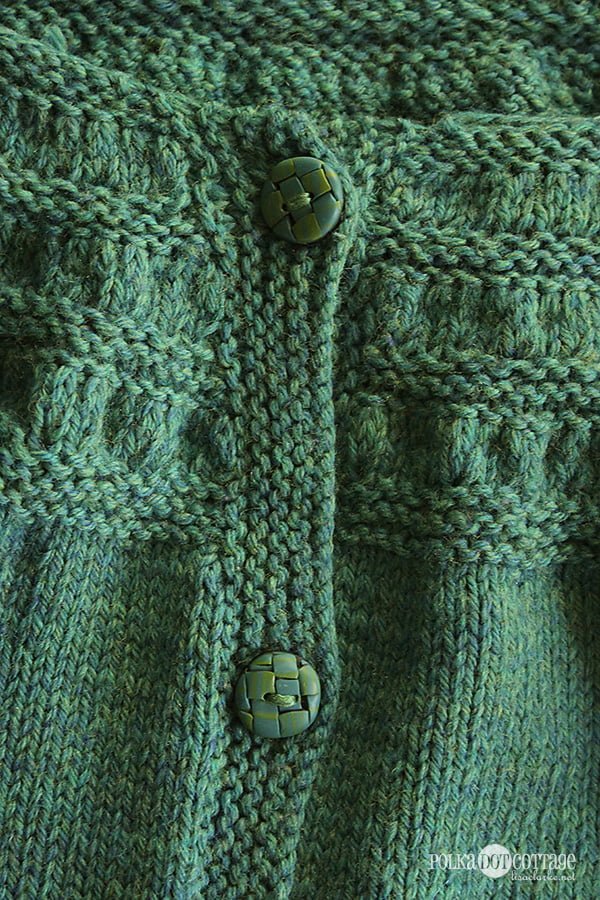 First, the heathered buttons. I replaced the generic stash buttons on my original Tea Leaves cardigan from last year with these new polymer buttons. They’re meant to mimic the look of a heather yarn.

And then I did a variegated option. This button is bigger than the others, that’s why you can see more of the weave. I added it to the neckwarmer I made some time ago.

I like these new button styles, and how they complement the knits, but at the same time are almost invisible against them. Aidan said I should call them “invisibuttons.” I ultimately called them something else, but I thought his suggestion was clever. I like the way that boy thinks.

This weekend I will hunker down with my photos and my words and turn them into something coherent and useful. Stay tuned, if you are feeling at all button-inclined!

15 thoughts on “Cart before the horse.”