Allow me to introduce the next granny square creation in the series: the mini blanket.  It’s really too small to be a blanket, but I’m not sure what else to call it, particularly because I’m not sure where it’s going or how it will be used!  So mini blanket it is, for now.

This is the second project I’ve made using my grandmother’s granny squares.  (The first was here.) 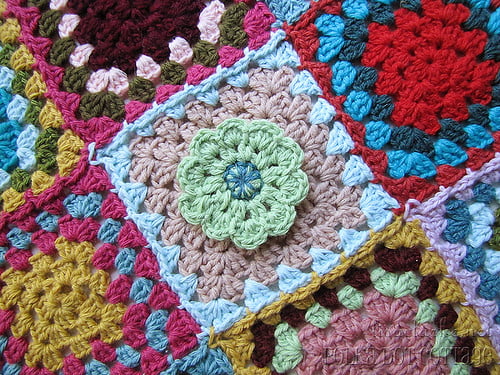 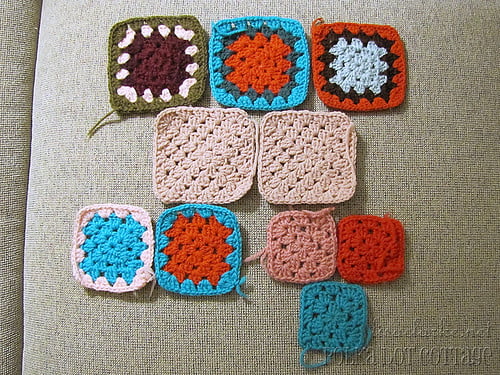 Step 1: Modify and/or supplement the squares

I really like the look of the squares that have three rounds of one color, a fourth round in a new color, and a fifth round in yet another color (like the three in the top row of that photo above).  So I selected squares that either fit that pattern or could be added to and made to fit that pattern.  I also used a couple of solid color squares.  I honestly found the large solids somewhat unappealing, but I knew they could be improved if I embellished them.

I’m a yellow-green and blue-green freak, in case you haven’t guessed, and I knew I wanted there to be more of them in the finished product, so I used those colors in making my modifications to the existing squares. 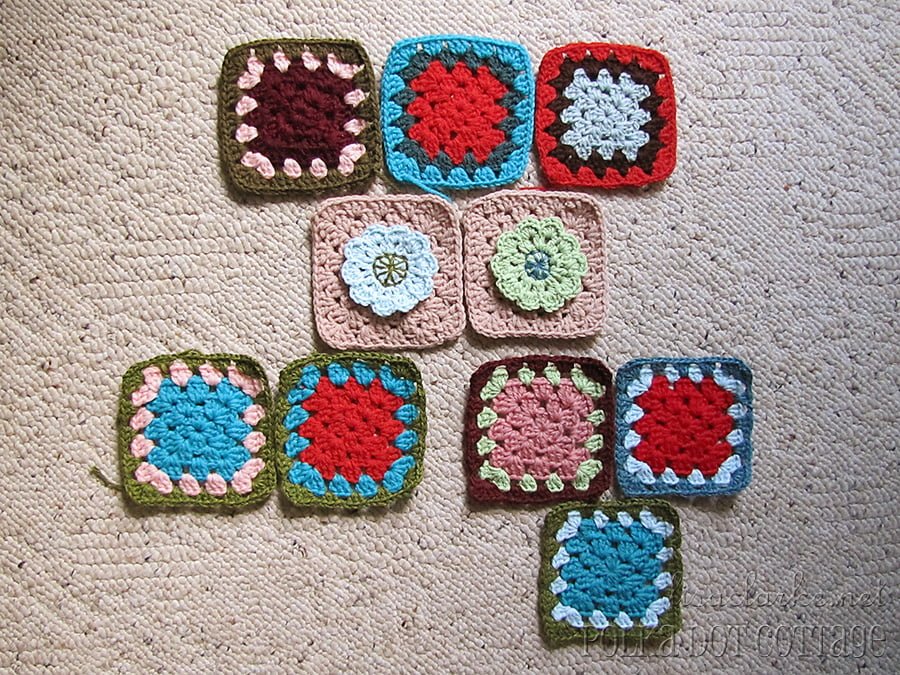 The modifications consisted of extra crocheted rows on the five bottom squares and some flower embellishments sewn onto on the middle squares.

At this point I had ten squares, all the same size.  Ten wasn’t enough to make anything decently-sized, so I made another five squares, and introduced some dark pink and mustard into the mix. 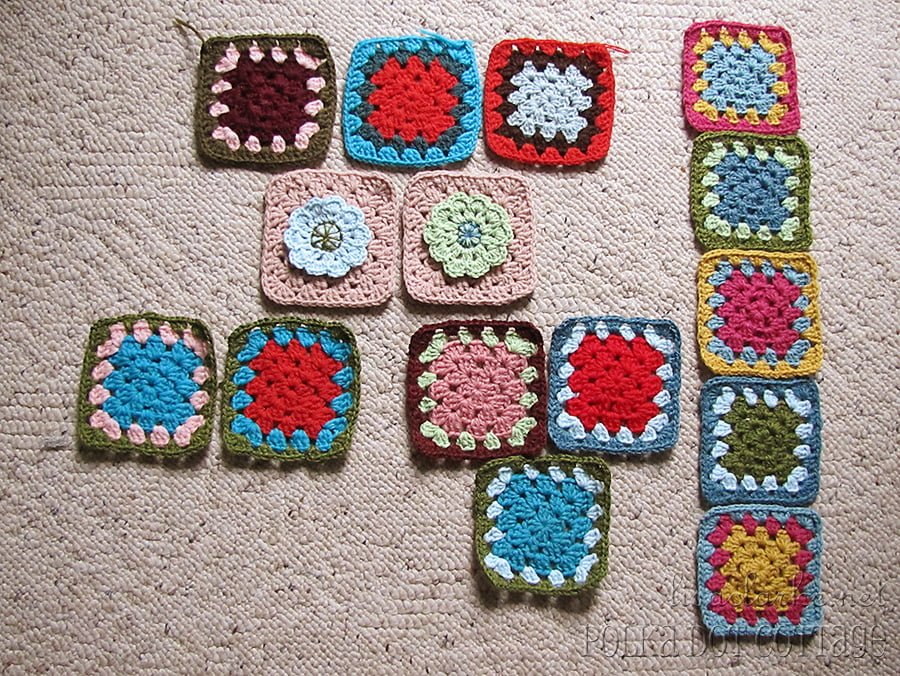 I then had fifteen same-size squares, in lots of the colors I wanted to emphasize. 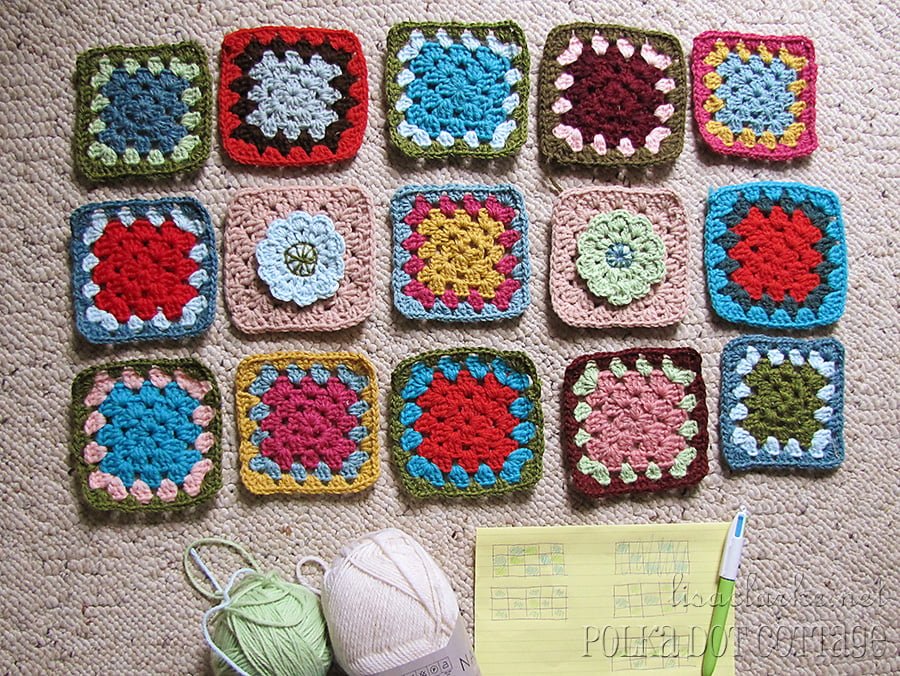 I arranged them in a 3×5 grid, and distributed the various colors as much as possible.  All that remained was to choose a background color to use to connect the squares.

This was not as easy as it sounds… all along my plan was to use white to surround the squares.  I’ve seen that done nicely in several places (this is a lovely example).  But when I outlined the first square in three rows of white, I wasn’t sold.  I thought maybe it would look good with a checkerboard of white and aqua or green (or all three), and so I outlined a few more squares in pale colors and joined them to the first.  Ew. Not impressed.

I ripped it out and tried again with just two rows of light colors.  Not much better.

In my mind, nothing really beat the way the unjoined squares looked next to each other.  It took a few days of dithering before I finally decided THAT was the answer – forget white and instead join them in multiple colors – more of the same ones that were already in the squares, and that looked so nice next to each other. 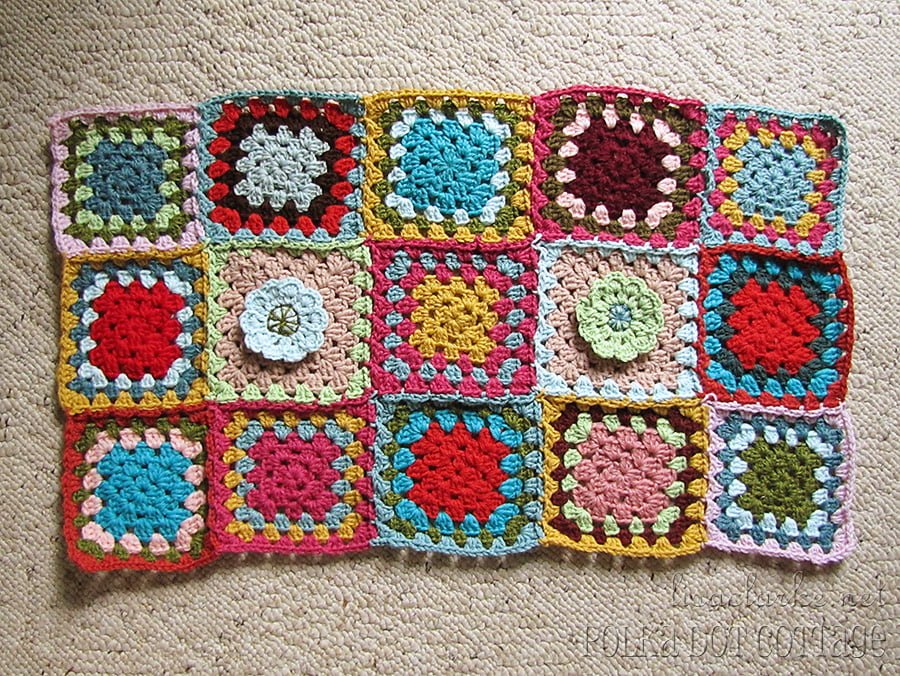 Now, that I liked.

It needed a border, and I considered doing some kind of fancy trim, but in the end I went with more of the granny square style.  Two rows of it in two different colors.

I had weaved in the ends as I went along, so there was none of that to worry about.  I just blocked it overnight, and it was finished.

I really like it, and I love how different it is from my first project, despite the original squares being from the same source.  The only question now is, what to do with it…

I intended all along for it to go in my bedroom, maybe over an antique trunk we have at the foot of the bed, or thrown over the back of a wing chair we have in there.  I chose the colors based on those that will be prominent in the quilt I am making for our bed.  But (you knew this was coming, right?) the room is kind of a mess, and the quilt so far is nothing more than a pile of fabrics in a bin in the basement.  This little blanket will get lost among the clutter in there, and since I want to enjoy it right this very minute, there needs to be another plan. 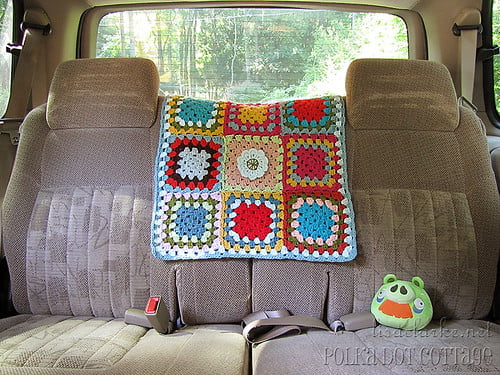 Hmm, yes, this will do.  And now I have the urge to sew throw pillows.  Don’t you think a pillow or two would look nice on that seat?

Project #2, used ten of Granny’s squares (seven of which were modified by me), five of my own squares, and roughly (very roughly) 200 yards of new yarn in various colors.

I used this set of flickr photos for a new perspective on joining squares.  It ended up looking about the same as the method I used last time, but I found it easier to hold the hook this way.

The crocheted flowers were made according to a pattern from Linda Permann’s Crafty Crochet Embellishments class. 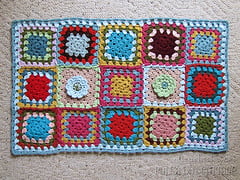 Next on the list?  I’ve got a pillow for my brother in the works (all finished except for the turning it into a pillow part), I’ve just started my mother’s table runner, and I’ve got ideas floating through my head for my sister and one of my aunts.