Once upon a time there was an artsy-craftsy geek-girl who was planning a four-day weekend in the Boston area.  She was just learning to crochet.  She had also recently read a glowing review of a new fabric and yarn shop in Cambridge.  These three facts came together in a craftacular way, as you might imagine… 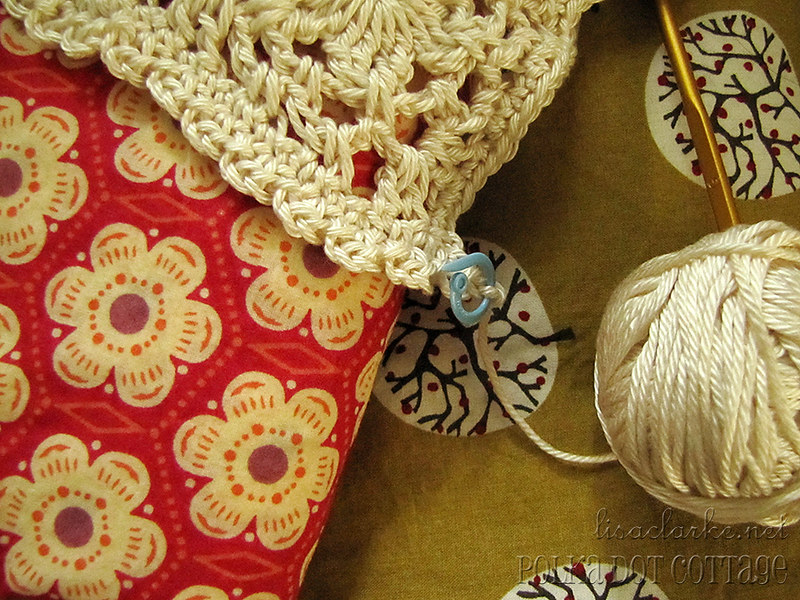 First, she chose an attractive project out of Crochet Adorned – The Floral Motif Yoke Top, with it’s crocheted shoulders and fabric body was just the thing.  She eagerly dragged her less-than-enthusiastic boys out of the hotel and off to Cambridge to check out gather here in person and choose her supplies.  Half an hour later, they emerged from the store, the crafty girl clutching her shopping bag with glee, and the boys feeling even less enthusiastic than before.

Don’t worry about those boys.  Far more interesting to this story is the contents of the bag: one skein of Cascade Ultra Pima Cotton in Natural, some yardage of Anna Maria Horner’s Little Folks voile, and some of Michelle Bencsko’s organic Nature Walk as well.  (What can I say? she couldn’t decide between the two! And, in fact, had you been there, you’d have been impressed at the restraint that only buying two fabrics entailed.) 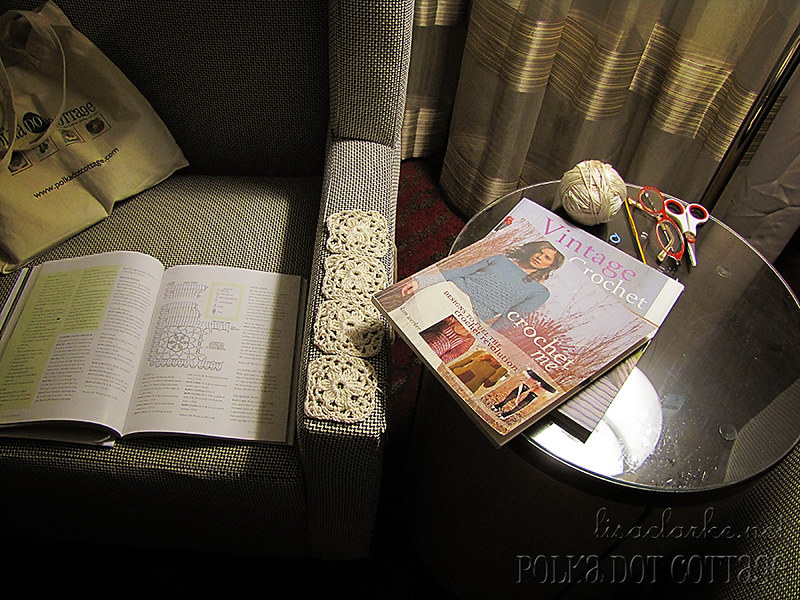 Back at the hotel, she found herself a cozy corner and started in on those flower motifs.  Four days, one five hour car trip, two loads of laundry, one sink full of dishes, and a surprisingly small amount of cursing later, the yoke was complete. 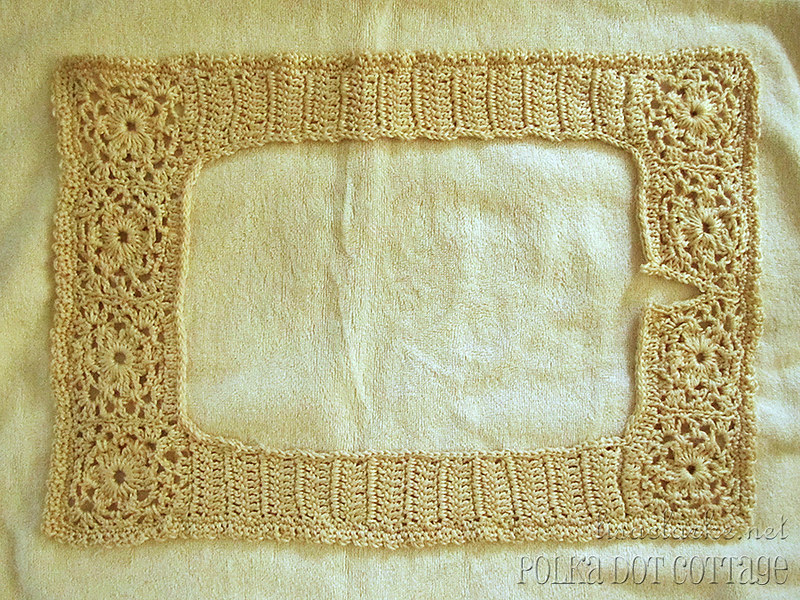 And, oh, how impressed she was to see what she had accomplished in such a relatively short time!  And with much more ease than she could have possibly imagined.  Yes, there were some difficulties, but nothing too terrible, and nothing that wouldn’t get easier with each successive project.  This was the tricky phase of the Flower Motif Yoke Top, and it was complete.  What a relief! 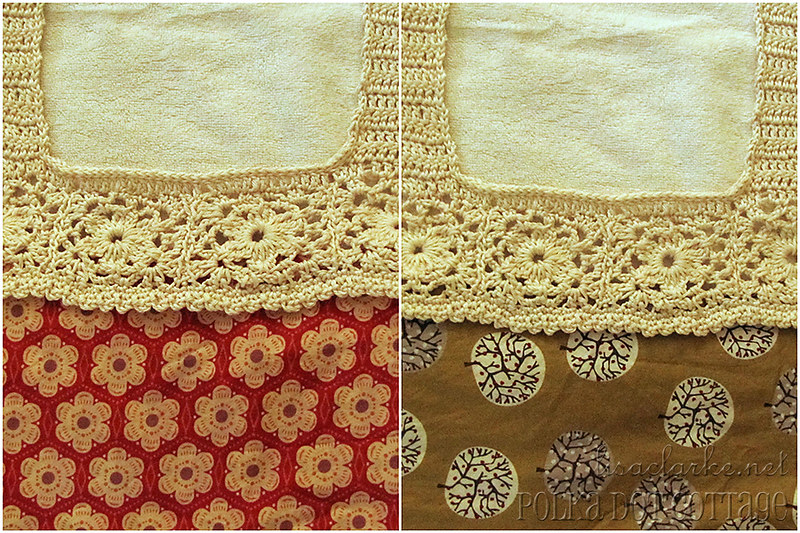 She hemmed, she hawed, she polled her Twitter followers… and then she went against the consensus of the Twitter followers when she realized she actually did have her own strong opinion on the subject. 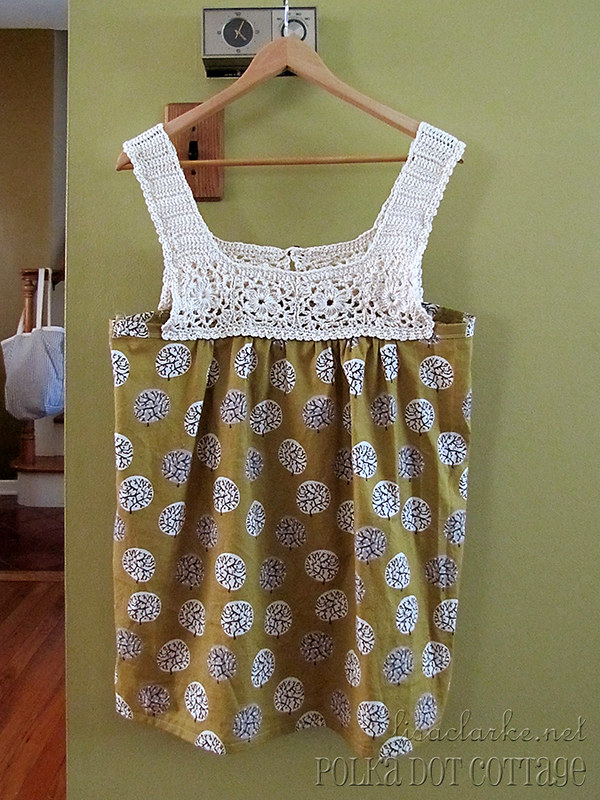 And so, the crafty girl’s first crochet project was complete.  And she was oh, so pleased! 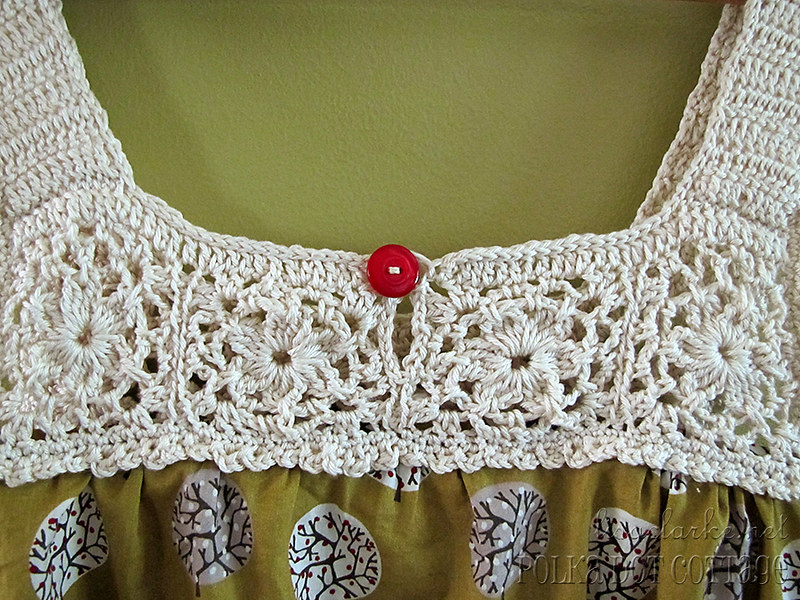 Even the back was lovely with its pretty red button.  She could hardly wait to put it on and wear it all afternoon!

And, indeed she did put the shirt on.  But she didn’t wear it all afternoon… 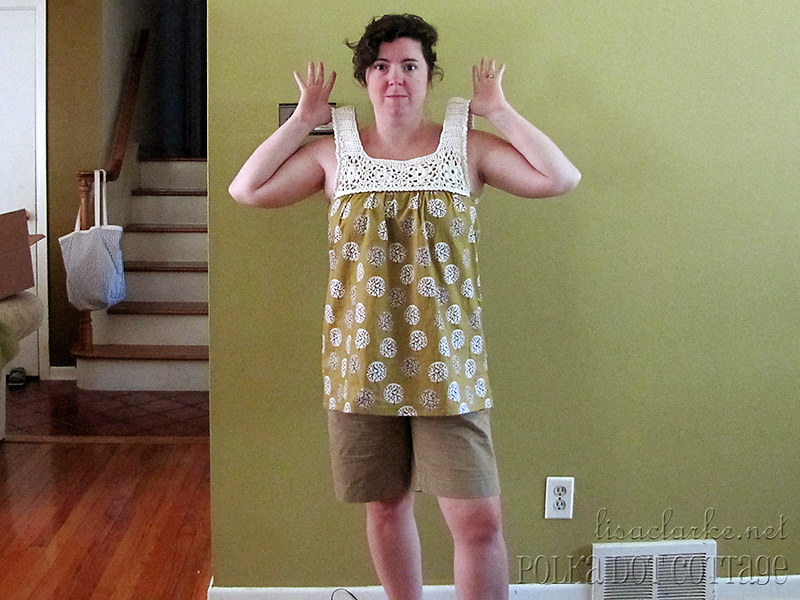 Uh oh.  Perhaps she should have made the straps a wee bit shorter.  Or even a whole lot shorter.  The crafty girl’s lovely shirt, as it turned out, had a multitude of fit issues, but I am happy to report that she is not in the least bit discouraged.

Perhaps some day soon there will be a sequel to our tale – one in which our heroine performs delicate shirt surgery and emerges victorious, brandishing a garment with which she can live happily ever after.

Wait, did I say “perhaps”? I meant “absolutely definitely!”

13 thoughts on “A crafty tale”