68 degrees, sun shining, breeze blowing.  It’s the quintessential weather for taking an open-window, sing-alongey, drive through the countryside.  Over rolling hills, through farmland and little towns – it’s one of the simple pleasures of life, and one that I don’t indulge nearly as much as I used to.  And if we’re being honest, I probably would not have gone out driving today either, if not for the fact that I had a destination in mind. 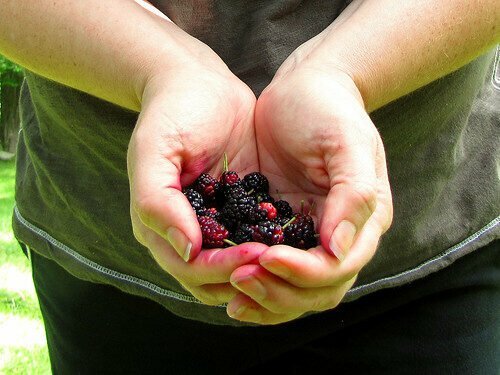 I don’t know what made me think of posting to the county Freecycle list as part of my quest, but I did, and within 24 hours I had an offer from a very nice family who had a few trees, and had already made all of the mulberry baked goods they could handle.  I could take as much as I’d like.  Yippee!

It’s times like this when I wish I was less timid.  Had I been a more bold sort, I’d have whipped out my camera and taken pictures of my surroundings.  The family lives on an ostrich farm!  There were giant birds everywhere – how cool is that? I’d have taken ostrich photos, berry photos, and most definitely I’d have snapped a few pictures of my little blond tour guide. 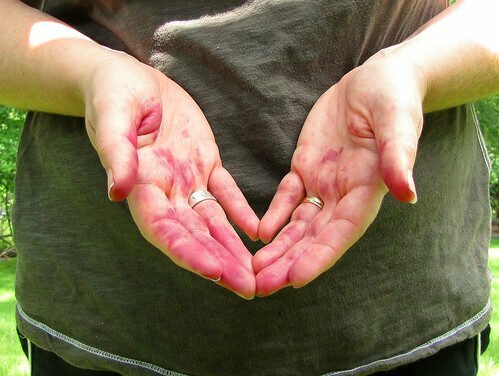 She was the most adorable (and, oh! so chatty) little girl, who showed me where the mulberry trees were, and then stuck around to help me pick, and to tell me everything I never thought to ask.  For instance, I know that she has three brothers and a sister, that she’s having a birthday party very soon, that one time an ostrich got out of it’s pen, that another time the family dog got into the ostriches’ pen (and the ostriches didn’t care for that one bit, as you might imagine.)  I also learned that she was already an aunt at the tender age of almost five, and that her niece’s name is Olivia. (We both agreed that’s a pretty name. ) She giggled over how purple our hands were becoming and then she explained a foolproof way to un-stain them.  She told me that the farmer drives the tractor in the spot where we were standing, and that is how the fallen berries get so crushed.  There was also something about Florida, and her mother’s sister’s wedding, but I didn’t quite catch all of the details on that.

I very much enjoyed our conversation – I wish I had even half of her small-talk skills. 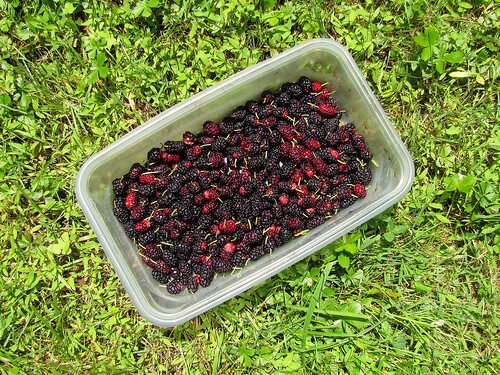 So now I am home, and I have a nice little bucket of berries, ready to become jam, or maybe a mulberry crisp – ooh, yes, definitely a crisp! My favorite way to eat berries!

Getting back for a moment to me being too timid for my own good, if I were a more bold person, I’d probably have filled my bucket up higher so there would be extras to stash in my freezer for an off-season crisp.  I didn’t want to overdo it, though.

In the coming years, thanks to Alison’s generous offer, I may have my own little mulberry harvest, and then I can be as impolite and greedy as I’d like.  Hee hee.  Thank you Alison.  And I don’t know if you’ll ever see this, but thank you Chris, for answering my Freecycle post.

My life would be so much less mulberrilicious without the internet!