Over the last few years – ever since I began blogging regularly, really – I’ve been working on improving my photography skills, both in the taking of the pictures, and the processing of them later.

On the one hand, I think that you should be able to get a fantastic shot straight out of the camera without ever firing up Photoshop, Paint Shop Pro, or the multitude of other image-editing software out there.

But on the other hand, maybe you can’t.  (Or maybe you can, if you’re a better picture-taker than I am.)  At this point in my evolution at least, it can’t be denied how much a little tweaking can bring life to an otherwise ho-hum image: 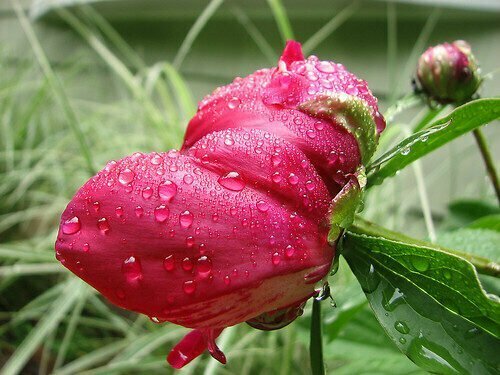 Isn’t that a little better?  I used Paint Shop Pro X2 to add some warmth to the colors and increase the saturation of the reds.  I also applied an unsharp mask to better define the water droplets, and used the burn tool to darken the background a touch.  (Increasing saturation by color, using unsharp mask, and the burn tool were all ideas I picked up from The Pioneer Woman.)

I wonder, if I were a more advanced photographer, and I knew how to manipulate all of the settings on my camera in the proper way, could I have gotten my photo to look this way without any editing after the fact?  And if not, then is this photo really an accurate representation of what I saw?  Or did my eyes really see the less crisp, less vibrant version that my camera did in the first photo?

I have a book that I plan to spend some time with this weekend, called How to Photograph Absolutely Everything.  I enjoyed it last year when I picked it up from the library, but I now have my own copy, and I am eager to learn!  The better my photos are SOOC, the less I have to mess around with them in software later.

Unless, of course, I am looking to give them some special effects…

Like these two, both of which started with the punched-up image above and were edited from there.  (Click on the photos for a better look – they are more impressive enlarged.) The one on the left was achieved by playing with the curves in PSP.  The one on the right was uploaded to Picnik, and cross-processing was applied.  Neither one of these looks really comes across as natural.  They seem more like they were taken in 1972 and then left in a drawer somewhere to fade.  I really love that effect.

I’m still working on a foolproof method for duplicating these looks – I seem to try something different every time – but there is a lot of inspiration out there on flickr.  Some of my favorite contacts who use that faded vintage effect beautifully are Tracy (pricklypearbloom) and Kristen (mainemomma).  You should check out their photostreams if you are not familiar with them.  The Shutter Sisters flickr pool is also brimming with some fabulous shots.

I’d love to talk “photo processing” with you, if any of you have favorite software, effects, or tips you’d like to share!