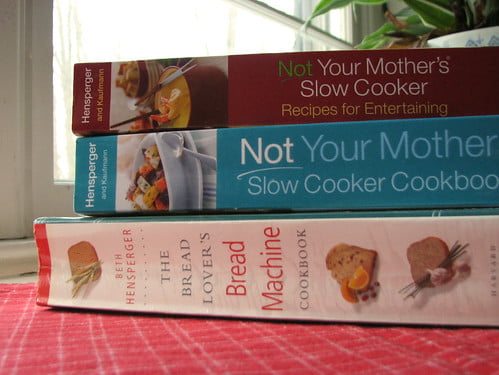 I admit it. I have, in the past, owned entirely too many kitchen gadgets. Sometimes I would buy them myself, often I would receive them as Christmas gifts. At one time or another I owned a rice cooker, hand blender, electric wok, food processor, blender, electric griddle, ice cream maker, sandwich pouch thingy, pizzelle maker, waffle iron, electric can opener, bread machine, crock pot, cookie press, and God only knows what else.

The electric can opener went out years ago – I’ve always preferred my small manual crank opener that fits nicely into the silverware drawer.

The rice cooker, hand blender, and possibly the electric wok (I haven’t seen it in some time, so I don’t think I have it anymore) were purged in the Great Decluttering of 2006. The sandwich thing, pizzelle maker and cookie press probably should have been as well, but I’ve still got them, since they’re tucked in a cabinet out of the way, and not really bothering me.

Still, that leaves a lot of stuff. The electric griddle was important initially, because I couldn’t for the life of me make pancakes over a flame. I’ve since gotten good at that, and rarely use the griddle. The ice cream maker was used for about a month when we first got it, but I haven’t taken advantage of it since. I’m tempted to get rid of it, but afraid that as soon as I do, I’ll want ice cream. So it stays for now.

I’ll confess that I replaced the Hand Blender

, just a few months ago. I never really “got it” with the original one I had. As in, I never understood why you’d need such a thing. Until it clicked what the “immersion” part of “immersion blender” means to a picky person such as myself. Let’s just say, I ate Moroccan Bean and Vegetable Soup last night, despite the fact that I don’t care for beans or vegetables. A little whir around the pot with the hand blender, while the soup was cooking, and suddenly those icky lentils and chickpeas were nothing more than little chunks of texture in a smooth, delicious soup.

Ok, so I’m a hand blender convert. Having it around is proving to be good for my health. I’ll tell you, though, if I suddenly lost my cabinet space and had to only keep gadgets I had room for on the counter top, I know exactly what those two gadgets would be: Bread Machine

In fact, I consider both of those items to be essential kitchen tools, right up there with Microwave Oven and Freezer.

It’s such a nice feeling to dump a handful of ingredients willy-nilly into them, and a few hours later be treated to wonderful smells emanating from the kitchen.  All the while, the machines are doing all of the work. What a boon to the underachieving cook. Heh. 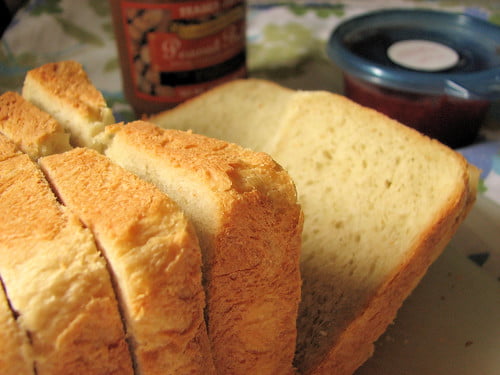 Along with these essential tools, I’ve kept some cookbooks. You’ve likely heard me praise Beth Hensperger’s Bread Lover’s Bread Machine Cookbook as one of my all time favorite recipe collections, but it bears repeating. If you have a bread machine, and you want to use it to its fullest potential, you need this book. Not only does it contain several hundred bread recipes (many, many whole grain options included, some that use produce from the garden, others that are sweet) it also has a comprehensive section on the hows and whys of the machines themselves, and tips for creating your own recipes. Also cool is the jam section. Yes, I said “jam.” Some bread machines come with a jam cycle, and there’s a whole chapter dedicated to putting that cycle to good use. 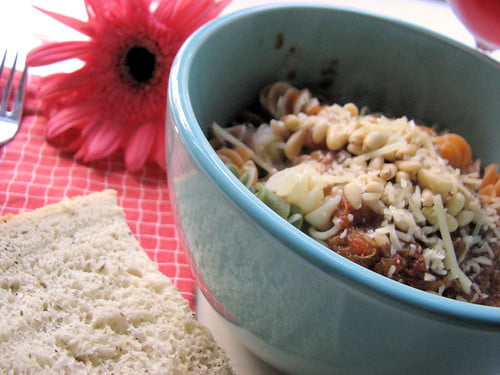 I’ve gotten many years of enjoyment (and good bread) out of that cookbook, so when I was looking for a modern, healthy crock pot cookbook last year, I was excited to see that the same author had penned one. Not Your Mother’s Slow-Cooker Cookbook has not disappointed me. I used it to make Pot Roast for the first time last year, as well as my own Tomato Sauce. There’s a yummy Chicken Tortilla Soup recipe, and so many others that I am looking forward to trying. Like the bread machine book, this one also has a fabulous section that explains the ins and outs of slow-cooking, and helps you to be successful improvising your own recipes.

This Christmas I received Not Your Mother’s Slow-Cooker Cookbook for Entertaining, and I’ve already made one of the recipes for a party (Buttery Rosemary Pecan Halves – mmmmmm) and bookmarked another (Chicken in Champagne).

So, where am I going with all of this? A recent discovery: The Ultimate Rice Cooker Cookbook. Same author, presumably same quality of recipes and good information. Somebody stop me before I replace the unused rice cooker I purged four years ago. Must. resist. (Or, if you really want to push me over the edge, tell me in the comments how your rice-cooker has changed your life, and how you could never function again in the kitchen without it.  Whatever.  That works for me, too.)

25 thoughts on “Kitchen tools and temptations”