I have to thank you all for the feedback on my partially-completed shawl.  I was on the fence about splurging for the materials to finish the project, and your comments gave me a lot of food for thought… 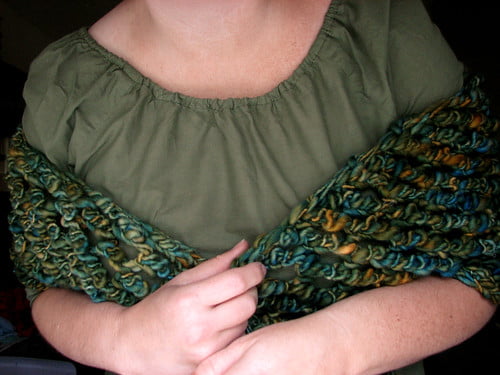 So, I bought the other two skeins and finished the shawl.  But not before I ripped out the original and found a new pattern to try.  I thought that the openwork would stretch my yarn supply out a bit.  As it turns out, the bulky stitch makes up for the open areas, and it still took four skeins to finish the job.  Live and learn, eh? 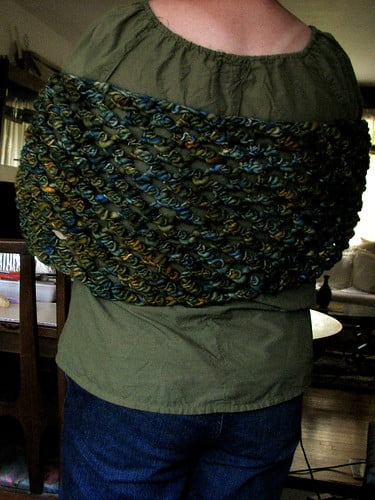 I like it, although I haven’t decided if I like it $50-worth.  I would prefer it to go further down my back, so I’m considering taking it apart and re-doing it in a different shape.  It’s also got some pretty visible mistakes, but I’m thinking that if I live with it for a while before I do anything, they may be harder to see.

It seems I get less critical of a piece the more distance I put between the construction of it and the wearing of it. 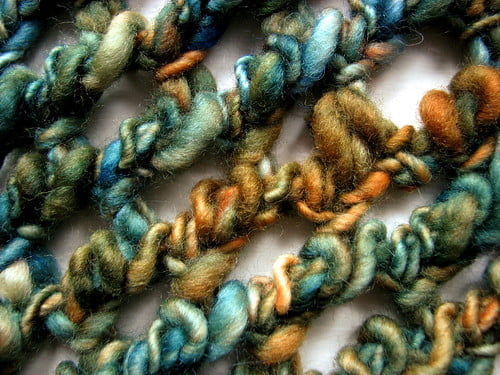 I love this stitch – it’s unlike anything I’ve seen before.  According to Denise Layman, who wrote the pattern, the instructions for the stitch accompanied an antique knitting loom (125+ years old) that she scored on eBay.  Neat.

I should mention, I didn’t do the stitch exactly as written.  My Malabrigo Aquarella was much bulkier than the worsted called for, and so I adapted my process to make up for that.  It looks like my adaptation probably caused the finished shawl to be smaller than it was supposed to be. 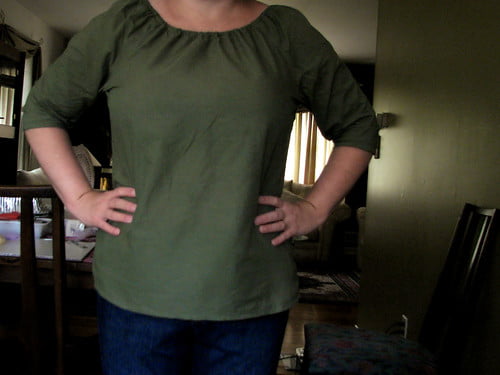 I was a multi-crafty maniac yesterday, because not only did I finish the knitting, I also finished sewing this shirt.  It’s the ubiquitous Simplicity 3835, but this time I used the sleeves from View B.  Rumor has it fall has arrived, so the little extra material on my arms will be appreciated.

I used plain white combed cotton lawn on this shirt and then tub-dyed it this olive green.  I liked the white, but it was a bit on the sheer side.  I planned to dye it Sea Foam, but then I added a little bit of Chartreuse.  After that it seemed to need some Royal Blue.  Then a touch of New Black.  And a bit more Chartreuse.

In every other artistic endeavor of mine, I am exactingly precise about color.  But when I’m swirling shirts around in a bucket of dye, I’m like a mad scientist.  <Insert maniacal laughter>

Next on my work table? Christmas ornaments.  They’re back.  And I’ll tell you all about it next week.

12 thoughts on “A shawl, a shirt, and a touch of madness”