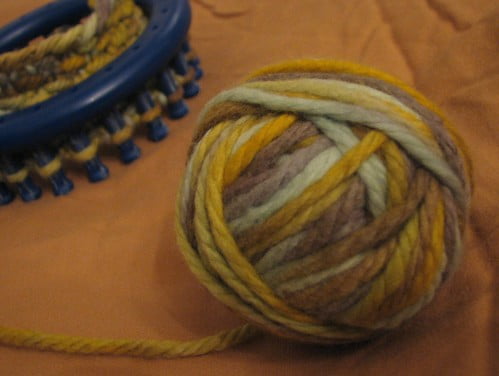 Everybody knows I needed another social network in my life, so it shouldn’t come as a suprise that I went and joined Ravelry this week.  For the non-yarn-afflicted out there, Ravelry is kind of like Big Database of Yarns, Patterns, and Finished Projects meets Flickr.

Members share images of their yarn stash, their works in progress, and their finished projects.  Just about every type of yarn, every knit or crochet pattern, and every local yarn shop you could want to link to are found in their database, making it very simple to give all of the necessary details about your projects.  Even without the social networking aspects, I can see it being a fabulous tool for those who like to keep notes about the things they make.  So, of course, it sucked me in.

We’re expecting another snow event this weekend, and I thought it would be great to settle in with a new project.  I’ve decided to make a neck warmer, and I found a pattern on Ravelry that I like.  It’s pictured here on the author’s flickr site.  I’m thinking it will be nice to have something smaller than a full-blown scarf that I can wear when I’m not wearing the patchwork scarf that I made last year.  I plan to embellish it with a clay button: either the one shown below that I made last summer, or a new one that I will make specifically to match the yarn.  Might be nice to get the clay out this weekend and play a bit…  We’ll see. 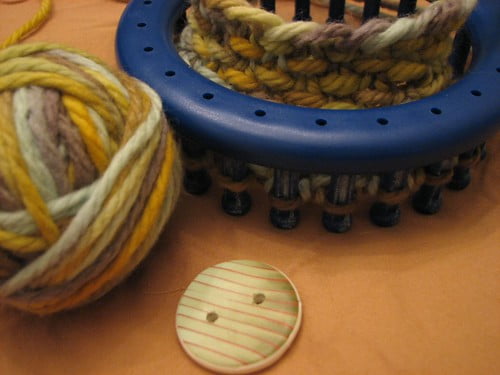 The best thing, so far, about making this scarf – all 5 inches of it that I’ve knitted thus far – is that it has forced me to learn a new stitch: slip 1 wyif.  Slip stitches haven’t made a lick of sense to me until today, when I finally read an explanation that clicked.  Thank goodness for the Internet, I say.  I mean, if I were still under the impression that the only thing you could do with a knitting loom was a knit stitch over and over and over and over… well, I’d have lost interest in about a week.  An exciting new world opened up when I realized that I could do just about any needle stitch on a loom.  Very cool.

Neil suggested to me the other day that perhaps knitting with a loom appeals to me for the same reason caning with Sculpey III appeals to me – maybe I just like that feeling of saying, “I made this beautiful item with a tool that most think of as a child’s toy,” and then watching the surprised reactions of those who wouldn’t have thought the tools to be capable of such appealing work.

Anyway, I’ll be back with pattern, yarn & button details when I’ve finished the neck warmer.  Until then, stay warm and toasty!