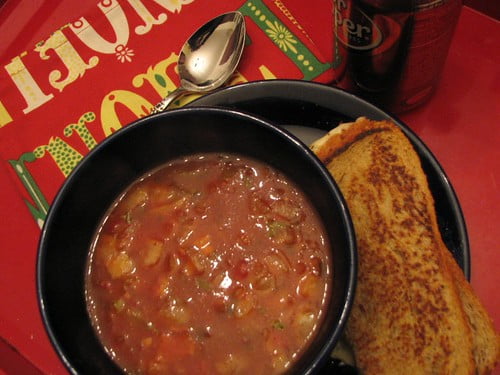 Poor Neil.  He doesn’t subscribe to the theory that soup can be considered a meal.  It never used to be an issue between us, but somewhere in the last year, I went and became a soupie.  I’ve been seduced by these steaming bowls of goodness.  Where once I was of the mind that the only soup worth having was a bowl of nearly-drained ramen noodles (and even that was only appealing when one was felled by some illness that required long periods of couch rest), I now have a freezer brimming with leftover homemade soups.  And poor Neil, who never had a problem with the occasional ramen noodle supper, has found himself face-to-face with at least one supper per week lately, where soup was the star.

It’s not that I’m completely unsympathetic to his feelings, but I just can’t stop making soup.  To prove that I’m not completely heartless, when I tried out tonight’s Chicken Tortilla Soup recipe, I didn’t make it to stand alone on our plates.  I also baked a loaf of Bread Machine Zucchini Bread, and made us some grilled pepperjack cheese sandwiches.

Hopefully that smoothes things over a bit between us 🙂

Recipe By: Lisa Clarke, based on a recipe by Beth Hensperger and Julie Kaufmann in Not Your Mother’s Slow-Cooker Cookbook
Servings: 8
Weight Watchers Points: 3
Serving Ideas: Serve with tortilla chips generously crumbled over the top.

NOTES: For the chicken, I used pre-packaged, pre-cooked, Southwestern style chicken, and chopped it smaller before adding it to the pot. 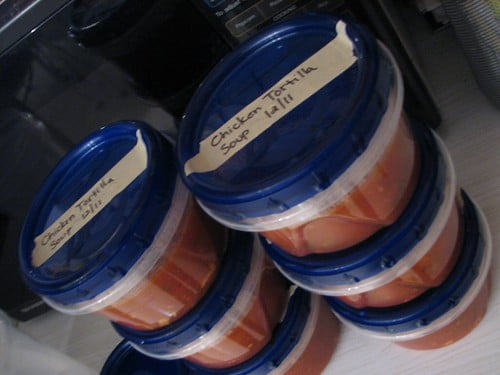 I am freezing the leftovers in single-serving size containers for six easy, healthy lunches for myself sometime in the future 🙂