It’s a small thing, really, but it still took entirely too long to hit me:  Decorating for Christmas does not have to be a One Day Event.

It does not have to be like the one festive Sunday of my childhood, a few weeks before Christmas, when we would put up the tree and decorate the house, to the sounds of Barbra Streisand and The Mormon Tabernacle Choir.  Those days were wonderful – the kind of day a kid could look forward to all year – but it’s a standard I’ve been unable to live up to for at least a decade.

It’s just too much to expect that I can free an entire day in early December to devote to a “decorateathon.”  And until recently, I hadn’t realized I didn’t have to.

Wow.  Suddenly, there’s the freedom to put out the holiday kitchen linens (or finish sewing them, ahem.  still not done…) on December 1st, hang up Tacky Santa in the living room sometime the next week, and get to the tree whenever we get to it.  (It’s that dang tree that takes so long.  It’s such a big job, and so easy to put off. )

So today, which has really been an exercise in frustration for one reason or another, had a small bright spot smack in the middle of it.  Eamonn has been asking for at least three days, several times a day, if we could put up the tree.  And I’ve been saying “no” for three days.  Several times a day.

Today, at my wit’s end, I replied, “if you can go find something to keep yourself busy for one hour, and let me get some work done, I will go into the attic, get the Christmas tubs down, and we can decorate the living room together.”  He scurried off, I dealt with some business email, and at 2:25pm, as promised, we ventured into the attic together to get the stuff. 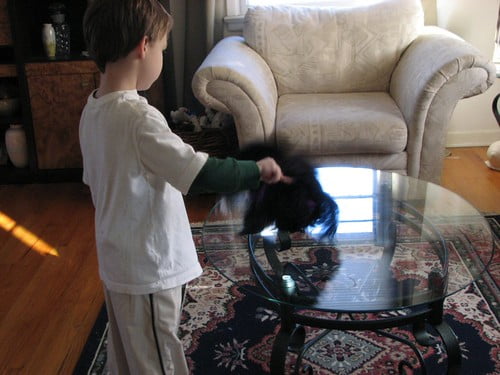 Eamonn dusted the tables for me, while I put away the coats that were strewn across the back of the couch. 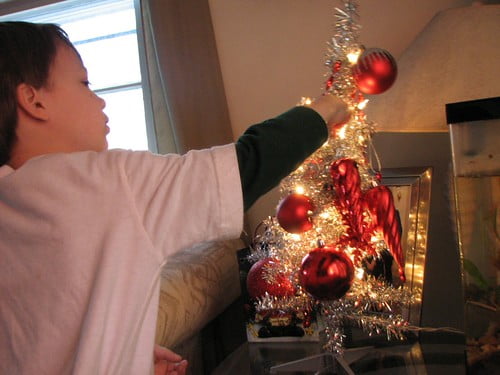 Then we dug through the tubs and picked out all of the Santa-related decorations we could find, along with a few trees & snowmen, and set up a happy little holiday oasis in the living room. 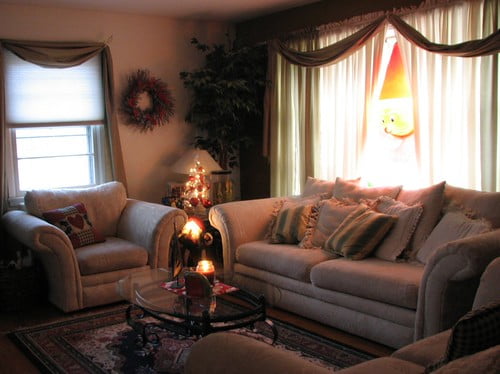 It’s the only decorated room we have, and it’s bound to stay that way for at least another week.  I’m fine with that. though.  I now know there is no rule that says I have to do it all at once! 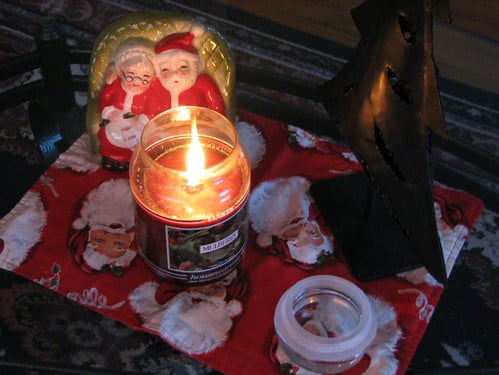 When we’d set the last Santa statue in place and lit the Mulberry candle, I felt done, and at peace, that even if we didn’t get the family room decorated and the tree in place with more than a day or two to spare, at least we’d have this part of the house until then.  We’d have this holiday retreat, and I wouldn’t have to feel bad for what I haven’t yet accomplished.

I enjoyed that thought for roughly three tenths of a second before Eamonn looked around and said, “can we put up the tree now?”  Gotta love the one-track five-year-old mind, eh?

13 thoughts on “There are no rules in Christmas decorating”