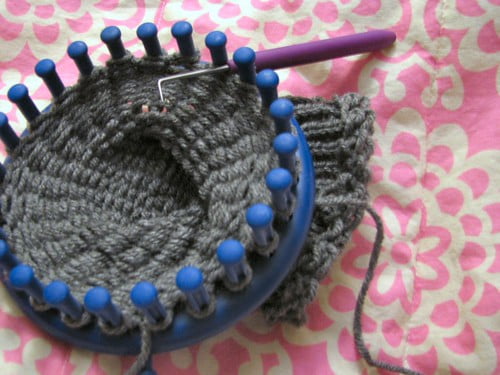 I was accused earlier this week of being an old lady.  Ok, so I was sitting on the couch with a quilt on my lap.  Knitting.  And watching The Bob Newhart Show.

Maybe I should watch The Office instead.  I’m not giving up the quilt, though.  And as far as the knitting goes, well, would you like to hear a little about that?

I’m not a knitter.  I’ve never been able to get the hang of the needles.  I do kind of know my way around a knitting loom, though, and when I saw Heather’s wrist warmers, the first thing I thought of was my small 24-peg knifty knitter.  The finished wrist warmers are essentially tubes, after all, and knitting looms are perfect for making tubes. 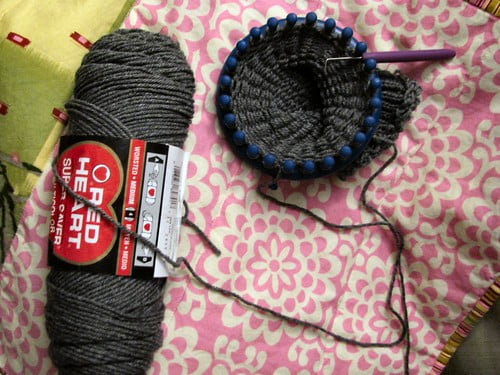 Let’s put aside, for a moment, the idea that wearing wrist warmers is just one more thing to add to the list of “why Lisa is more like 87 than 37.”  I’m hoping to get through the winter this year with the thermostat set a few degrees lower.  I really don’t see it as being a terrible hardship, either:  We all have new quilts to sit under.  We all have sweaters we can wear if we need them.  We have plenty of firewood.  And maybe now we’ll have a couple of wrist-warmers handy for those chilly days when full sweaters are too bulky.

I know my sense of what’s cool has never been that finely-tuned, but I really think these things are cool!  Maybe it’s because I’m all about the bloggy peer pressure, and I’ve seen wrist warmers pop up here, here, and here, to name a few places.  And those hip bloggers are far from being 80 years old.  I predict the knitted wrist warmer will be this winter’s answer to last summer’s Simplicity 3835 shirt. In other words, “Everybody is doing it.  And if they aren’t, they’ll soon give in.” 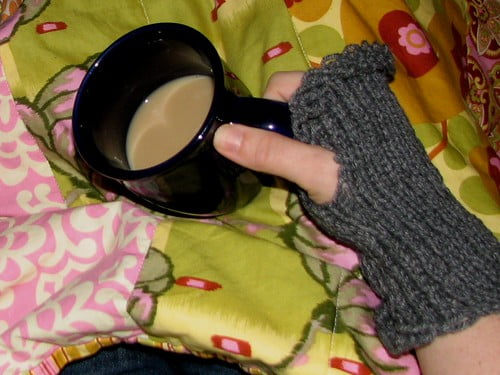 That being said, my first attempt leaves a lot to be desired.  I was eager to start, so I just used whatever yarn I had lying around.  When I make them “for real” I will make them in a different color and texture, and with a higher thumbhole.  Additionally, I need to work on my starting and finishing technique.  I don’t like the way the top looks, and the bottom is unraveling already.  I am going to have to look for some tutorials online.  On the plus side, I make a mean thumb hole, and I figured out how to do that entirely on my own.

Now pardon me while I soak my dentures and put on a little Sinatra.