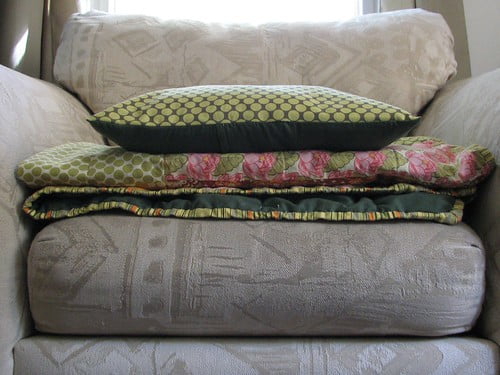 Well, I did it.  I bound my first quilt.  Well, actually it’s my third quilt, but it’s the first one with a binding.  You know what I mean.  I’m typing under the influence of decongestants, so I really can’t be held responsible for the clarity or eloquence (or lack thereof) of my words.

It’s never a pretty thing to be taken down by a cold, but it’s even less attractive when it happens during a single-parenting weekend.  Neil was at Capclave from Friday morning to Sunday night, and I?  I was on the couch.

Oh, alright, I wasn’t on the couch the whole time.  But by Saturday night my head was packed with congestion, and I gave up the idea of doing anything interesting with the kids this weekend. 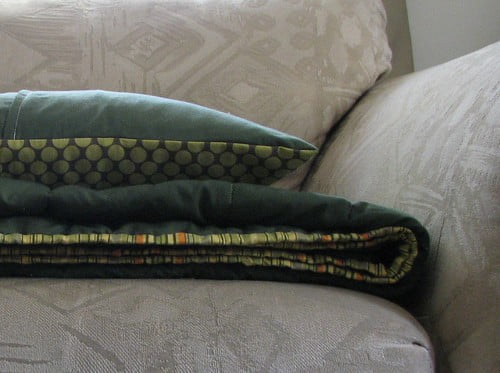 Instead, I installed myself into my favorite corner of the couch, placed my unbound quilt on my lap, and proceeded to learn how to slip-stitch.  I looked at the instructions in a book.  Didn’t get it.  I found a written online tutorial with accompanying photographs.  Still didn’t get it.  I got my “ah ha!” moment from this very helpful video, and proceeded to hand stitch the binding onto my quilt.

I sat there for two hours, peacefully sewing, watching a mish-mosh of strange things on tv.  Most of the time, the boys, too, were on the couch, nestled into the crook of my knees, also under the quilt.  My laptop rested on my legs, and the boys used it to send email to their Dad, letting them know they missed him.  My favorite part of Eamonn’s lengthy letter was the part where he declared, “MOMS CWILT IS COMFEY.”

He was right.  It was comfy.  I wasn’t able to take them anywhere interesting this weekend, like I usually do when Dad’s away, but it didn’t matter.  We had the couch and the “comfey cwilt.” 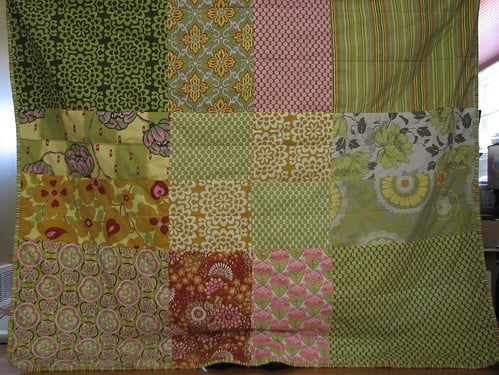 Two more hours of stitching after the boys went to bed, and it was done.  I’m so impressed with the way it came out!  I have two specific areas that I know need improvement (and I will work on doing them better for the yellow quilt), but they’re subtle enough not to bother me.

Just one more quilt left in this series, and then I can turn my creative energy elsewhere (hint: I just placed an order at Rings & Things).