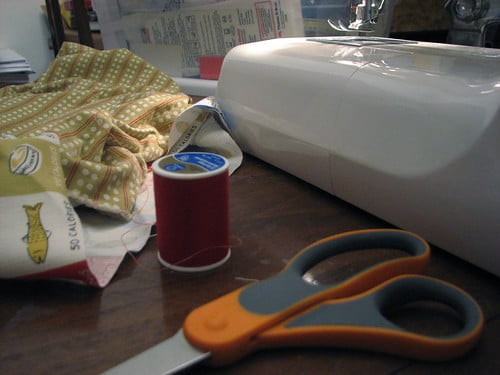 We had two rainy days this week.  The first made me want to do nothing but sip warm beverages and play on the computer.  The second was yesterday, and it affected me differently.  I found that I was most content when I was puttering around the kitchen.  So, I went with it, and I whipped up a batch of all-purpose cleaner a la Missy.  Then I put on an apron and my “Sweater Weather” playlist, and made some strawberry-rhubarb-orange bread.

Now, many of you know about the cloth napkin craziness around here:  I made a set of 20+ last summer, with lemons & cherries, and plenty of kitschy charm.  But then the fall came, and I realized I was just too seasonally-inclined to use cherry napkins at that time of year.  So I made another 20+ set with pumpkins & leaves on them.  I think you see where this is going.  Christmas napkins soon appeared, followed by a set that just matched my kitchen colors and could be used any other time of year.  I know, it’s a little insane.  And to make it even more crazy, I made one or two aprons to match each set of napkins, because everybody knows you can’t wear an apron that clashes with the rest of your linens.

I hereby give you permission to think I’m nuts. 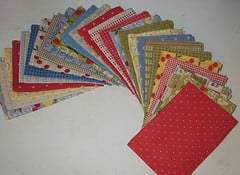 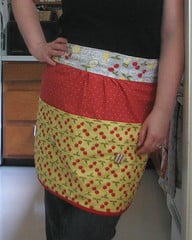 But here’s where I’m going with this…  Yesterday, when I grabbed my apron to make bread, I did not grab the cheery cherries that I’ve been using all summer – the one that goes so nicely with the Summer napkins that are still in use here.  No, I dug into the drawer and grabbed my Fall apron.  >gasp<

A mere 10 days or so left of summer, and I cheated on it with an Autumn apron.  I’m so ashamed. 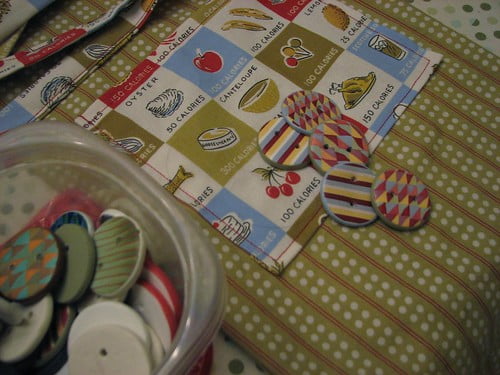 Thing is, wearing that apron made me realize just how much I really love that Lotta Jansdotter Simple Sewing cafe apron style.  With it’s clean, straight lines, nothing curvy, nothing frilly, nothing gathered, nothing girly.  It really lets the fabric choices shine.  And while I have one of these Simple Sewing aprons for every other napkin set I own, I didn’t have one for summer.  My two Summer aprons were both experiments of styles from other sources. 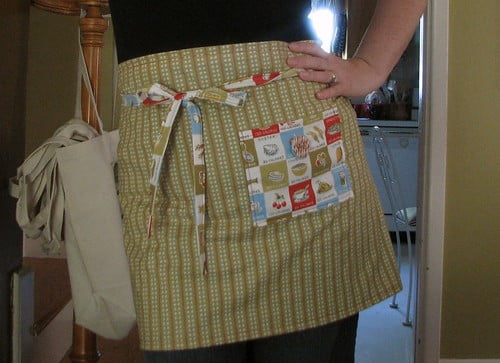 So I made one.  I have a stash full of Elsie’s Kitchen fat quarters at my disposal, which I’ve been hording in case I had to replace a stained napkin or two in the future, but I also lucked out and found a continuous yard of one of the fabrics, so that I could whip this up on the spot.  Plus, I had a pile of buttons already made to match, so it was just a matter of choosing one and stitching it on.  I might have been happier if the large chunk of fabric I had was a different color/pattern, but I like this ok.  Best not to think about it too much, or I’ll be talking myself into making yet another one…

I know it’s only going to be something like a week or so before I’m pulling out the Fall linens and hiding this in the back of the drawer until next June, but I think I can live with that.  It’s a small price to pay for equality among the napkin/apron sets, I say.  I’ll be sure to give it a decent workout this week.  Muffins, anyone?