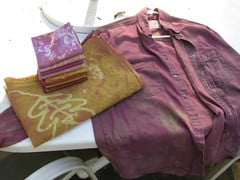 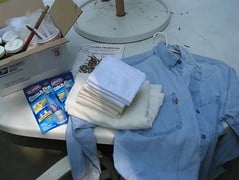 Sarah forwarded a link to me this morning for a Martha Stewart “Easy Batik” project. I’ve always really loved the look of batik, but have never considered trying it myself – entirely too complicated. But Martha’s project looked very very simple. The only thing I found wrong with it was the fact that it didn’t have the batik “look” that I like. You know, the variegated, layered colors, with the motif appearing in lighter versions of those colors?

I was pretty sure I could get that look by combining Martha’s technique with my own tub-dying one. So I just went for it, and I have to say, I’m quite pleased with the results. Here’s a bit of an overview, in case you’d like to try it yourself. Just keep in mind that I am about as un-fussy as it gets with this kind of thing. When I set up a couple of dye baths in the back yard, I never know what I’m going to get out of them, and that is half the fun! 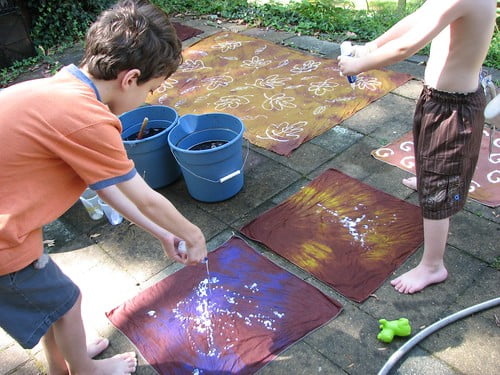 As it turned out, that pretty much translated into yellow, purple & rust, but that’s ok. Like I said, it’s all part of the fun.

We swirled our fabrics around in the various buckets, sometimes taking them out of one, and dumping them in another at whim. Sometimes, we’d twist them up before putting them in a new bath, so that we’d have bits of both colors showing. We followed the major steps of a traditional tub-dying method, but without worrying about any of the precision, the timing, or whether we were contaminating one bucket with another’s color. 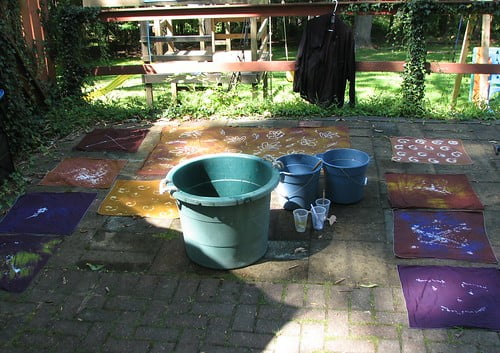 When we were happy with our swirls of color, we (actually, I’m going to stop saying “we” here because, realistically, all the boys did was choose one of the colors, try on some rubber gloves, stir a bucket once or twice, and squirt a bit of bleach here and there. I did the rest while they played Ultraman nearby.) Ok, so when I was happy with how everything looked, I wrung the dye out of the fabrics as best as I could, and laid them out on the ground. 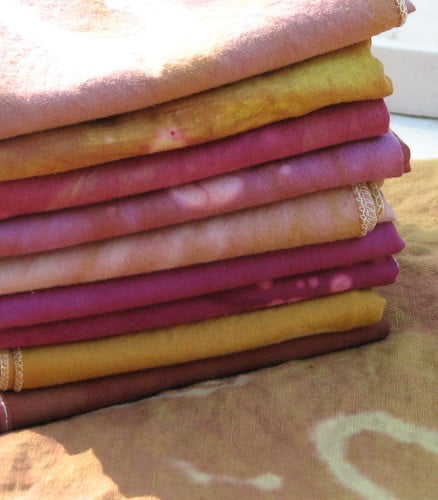 After the bleach did it’s job, I rinsed it off of the fabrics with the hose. A few of the designs, including the linen, I put back in one of the tubs, just to give the motifs I’d drawn a tinge of a different color.

One cycle through the washer & dryer later, I had a nice stack of purple & gold linens to play with. I’m not sure what will become of the bandanas. I’d have made the boys shorts if any of them looked enough like each other to become a pair. I suspect I’ll just set them aside to use as handkerchiefs for Eamonn, who has a strong (read: meltdown-inducing) preference for hankies over tissues.

The linen became a skirt, after supper tonight. I figured if it was going to be somewhat fall-themed, then it should also be longer than my others and supply some extra warmth for those crisp Pumpkin Latte kind of nights.  I’m very happy with it, and it’s nice that it doesn’t look like my other 32 handmade skirts.

The potential of this technique has impressed me enough that I have already placed an order for some new dyes and some plain cotton that I can play with. I would like to make something in the aqua/green family (anybody here surprised? No, I thought not.) and I’d like to plan out the design a little more carefully this time instead of just scribbling gigantic leaves all over the place.

Not that there’s anything wrong with gigantic leaves 😀