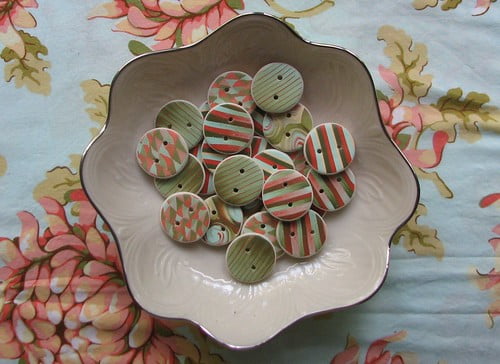 Oooh, what a lovely day it has been today! I haven’t spent a whole lot of time on the computer, but what I have spent, has been very good for the ego – holy cow, people! Those buttons I showed weren’t even finished yet, and I’ve gotten so many complements here, and on flickr, and I even got a mention on Polymer Clay Daily. I say again, holy cow! Thank you. I’m blushing, you know.

So would you like to see the finished buttons up close? 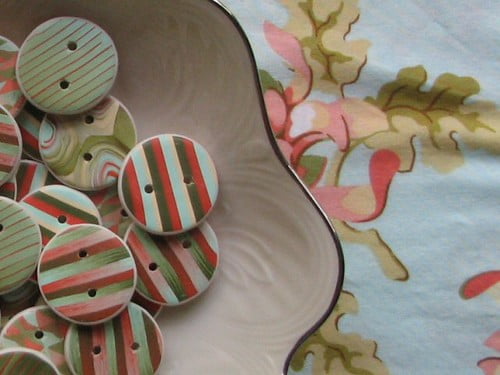 I liked them so much in this little dish, I almost didn’t want to use them in anything! Good thing I got over that, though, because five of those buttons had another destiny. There was a pillow waiting to be made… Initially, I had intended to do the whole pillow in a single fabric, but it occurred to me that it might be rather busy that way. I replaced a section of the mums fabric with some natural linen, and I think the effect is nice. The buttons have a chance to really stand out, too. 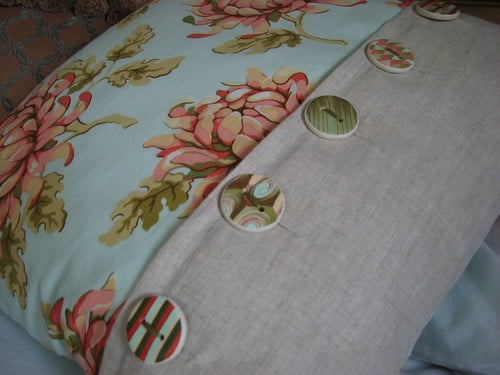 I have to admit I cheated in one regard. I just cannot for the life of me figure out how to make a button hole. My machine is supposed to be able to do it, but despite my best efforts, I always end up with a pile of mangled thread. The Pillow Book has a section that explains using a zigzag stitch to make your own buttonholes, and that sounded like something I could handle. Thank goodness I had the foresight to try it on a piece of scrap fabric because I couldn’t seem to make that look good either.

I considered using snap closures behind the big buttons like I do for my handbags, but I would have had to go snap shopping first. If you know me at all, you know that putting off a nearly-complete project for a few hours so I can run out and get supplies is not high on my list. Instead, I cheated, and I know that this may blow up on me down the road, particularly if I ever launder this pillow cover, but for now it’s an acceptable solution: I put a strip of stiff fusible interfacing on the back of the linen where the buttonholes belonged, and then I just snipped through both layers to create holes. I’m hoping the interfacing will keep it all from fraying. Time will tell. 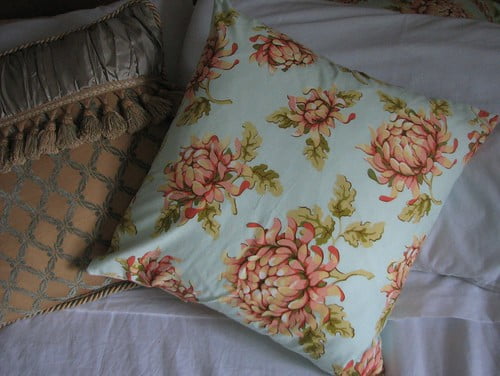 This is the back of the pillow, pretty in its own right, and now that I know how simple it is to make pillow covers (assuming I’m not complicating it with buttons and such) I predict some throw pillow makeovers around here in the not too distant future. Neil will be happy. He’s had it in for a particular pink pillow ever since I bought it 😀

19 thoughts on “Press this button”