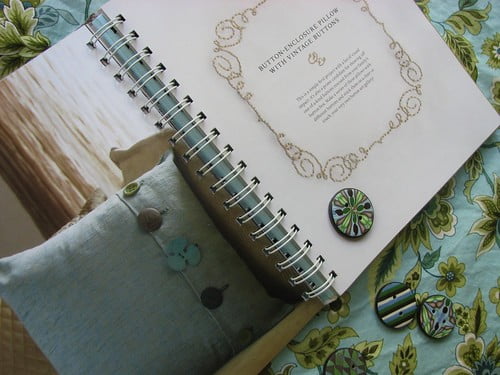 I got this new book the other day – The Pillow Book by Shannon Okey – with the idea of making throw pillows for my bedroom. I’ve flipped through it a few times before, but today I actually decided I wanted to try one of the projects. This button-enclosed pillow would be cool with some of this great Bleeker Street fabric, and my Swamp buttons, don’t you think? I did. Just two problems:

That was a little disappointing, but after giving it some thought, I decided I really didn’t want to use that fabric anyway. What I’d really like to do is use the same Heather Bailey stuff as I used on my pillowcases. I have enough for this project. But the buttons? They’d be an issue. In that I didn’t have any. 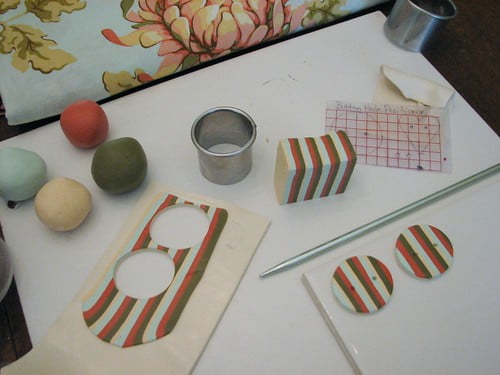 Do you remember me mentioning that I hadn’t had the urge to do much clay lately because the urge to avoid cleaning up the sewing mess was a much stronger one? Well, apparently this was just what I needed: a situation where I couldn’t sew what I wanted until I had the buttons to match. So, away went the machine, and out came the clay.

Despite telling myself that the colors didn’t have to be perfect, and that I was just making these for me, and that speed was key, I found it really hard to live with not-quite-right, straight-from-the-package colors. I tried, going so far as to make a striped cane out of them, but in the end it was too jarring to me and I gave the cane to the boys to play with.

So, forget speed. I spent all afternoon mixing clay colors, and darnit! if I’m going to go to that kind of trouble for one pillow, I am darn well going to make an army of extra buttons while I’m at it, and sell them to anyone who’ll take them 😀 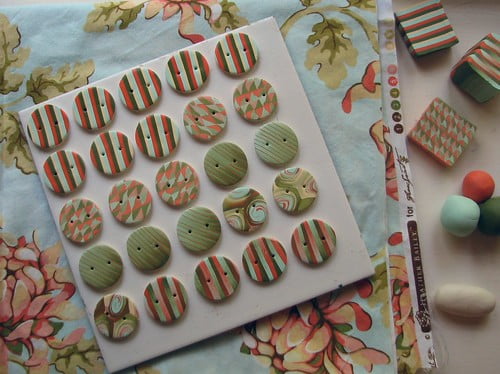 And that’s what I did. For the clayers among us, who know a thing or two about clay texture and temperature, I should point out that I made all of my canes with Sculpey in an 80-degree house. Frankly, I’m impressed that I had any success at all. After today, I am pretty much convinced that I could reduce a stick of butter if it came down to it. Crazy. 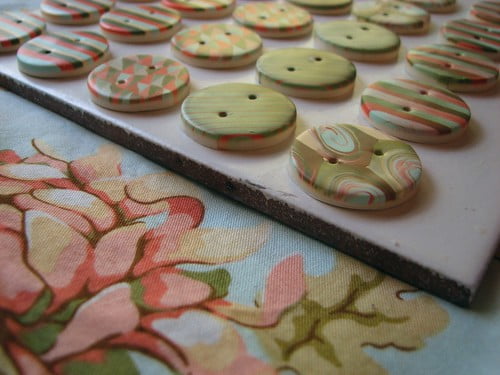 These buttons are still unfinished. They’re in the oven as we speak. After they cool, I’ll outline each of them in a pretty cream color, add a protective coating of liquid polymer clay, re-bake, and drill through those pilot holes. After that, I’ll be free to add them to a pillow, or just sit on the floor with them, running my fingers through them and arranging them in pretty designs on the rug 😀

Maybe tomorrow I’ll have a cute throw pillow to show off! Of course, before that can happen, I will have to get over the urge not to clean up my claythings…

16 thoughts on “One thing leads to another”