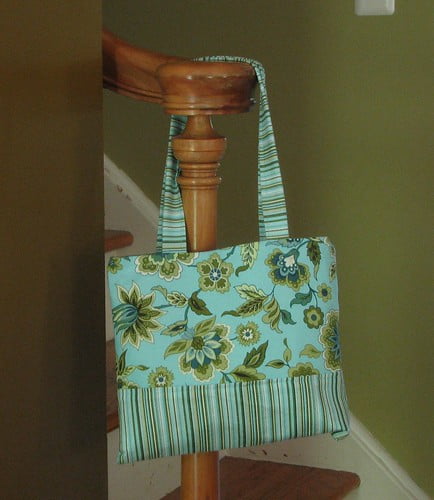 I’ve spent the better part of a year ogling purses on Etsy. I’ve hemmed, I’ve hawed, I’ve come close to plunking down my cash and waiting for my dream bag to arrive. But I’ve held back. Partly because I didn’t even know I had a dream bag until recently, partly because I’ve always been a “buy it for $12 at Target” kind of purse buyer, and partly because there was a little voice inside my head telling me I should try making one myself first.

I have been trying to beat down and ignore that crazy little voice for the last six months at least. Bag-making is too hard, isn’t it? What with pockets, and zippers, and interfacing, and linings, and oh! my head hurts just thinking about it. Can’t I just give The Funky Bag Lady $40 to do it all for me? She does it so well! 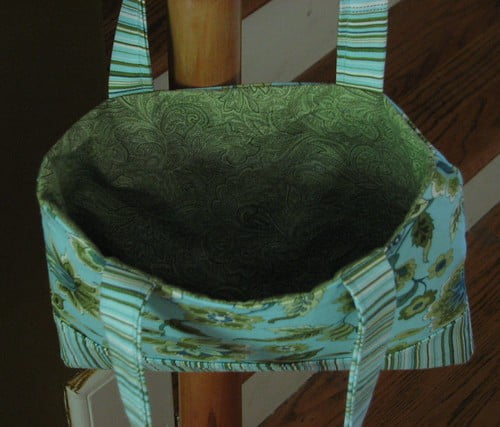 Well, yesterday a birthday card from my parents arrived, and it had a check inside (thanks, Mom & Dad, if you’re reading this, which you probably aren’t, but I’m going to cover my bases and thank you publicly anyway). I started thinking that I could use that check to finance my new handbag. There are several new ones in The Funky Bag Lady’s shop, and as I sat there on the couch salivating at the delicious blues & greens she’s been making lately, Neil said, “you should make one of those yourself.”

Well, darn. There was that voice again, only this time it was real, and it was coming out of my husband’s mouth. The very husband who will never see the point in owning a $40 handbag, no matter how well-crafted by human hands it may be. So I gave it some thought, and I decided that I should try and make myself a bag. I’d have to keep my skill-level in mind, maybe skip the pockets and zippers. Probably couldn’t make it stand up on its own, either. And I’d skip those pesky magnetic snap closures. Yeah… I could do that! It would essentially be a glorified tote bag, and it wouldn’t have anything on those great Funky Bag Lady creations, but I could always go ahead and buy one of those later. 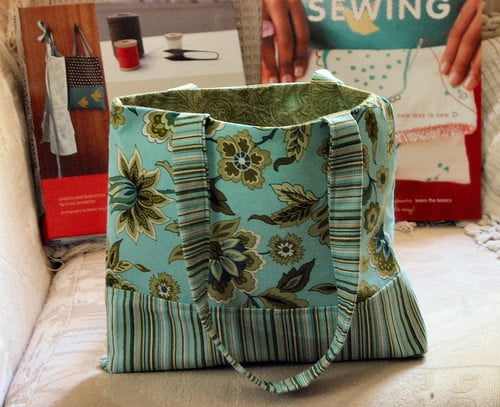 So just like that I was talked-into making a handbag. I chose three fat quarters from my favorite fabric collection (Bleeker Street by Michele D’Amore), and two projects from two different books that I could combine to do what I wanted. I used the Simple Tote from Simple Sewing for the basic construction, but I added relatively stiff interfacing to my main piece, and I made up my own measurements. To figure out how to insert the handles and lining, I used the Pleated Beauty Handbag instructions in Bend the Rules Sewing.

All in all, I’m really happy with it – I think it’s an impressive first try if I do say so myself, and I am pretty sure that I will attempt this again. Some things I’d like to try in a future version:

Thanks, by the way, for all of the wonderful birthday wishes yesterday! I was hoping to respond to each of them individually (I may yet!) but for now let this group “thank you” suffice. I had a nice day, that included Indian food for supper, which I love. And today, I got the weather I’d been hoping for yesterday. It’s a day late, but I’ll take it! Happy Friday!

[edited because I had a brainstorm while driving (as far as I know that’s still legal). I remembered seeing online recently a tutorial for making a flat-bottom bag. Of course, you’re supposed to do it before the whole thing is put together, so that your mess is on the inside, but it made me think of another way to get a similar effect and still keep the outside looking decent. So, I did it. And, as long as I was fiddling with it anyway, I added a snap closure with one of my polymer clay buttons for decoration.

I like! It still lacks pockets inside, but at least now it looks more like what I was going for. NOW I’m done. But you know there will be more of these…]