This post is brought to you by an army of three-and-four-year-olds in costumes. My four-year-old brought Frankincense. 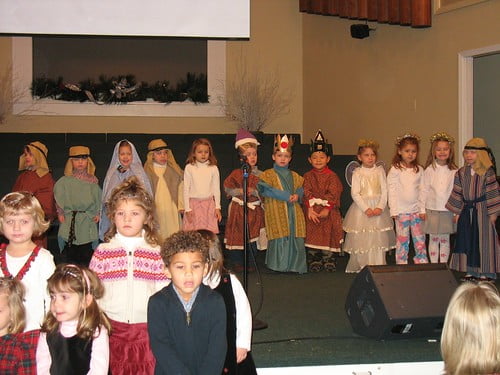 Today I’m waiting for the Verizon guy to come and install FiOS. It could be an all-day event, since we are likely not to be properly wired. We’ve been a strictly 8-channel (or 10, if you count the fuzzy-reception, foreign ones) household since before we were married. Why, when I am trying to be more conscious of screen time, are we adding 200 channels to our repertoire? Strictly financial. It costs less to have internet, phone & tv all bundled together with one company than it does to have just phone and just internet from two different places. 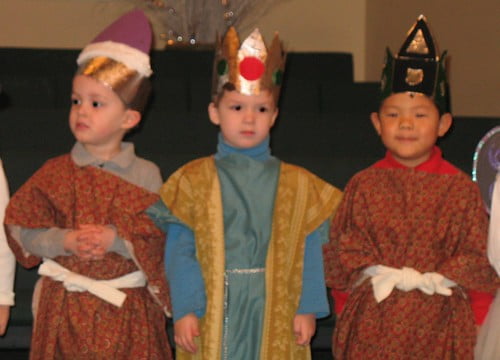 I’m also waiting for fabric to arrive. I ordered some more Santa fabric like my skirt, so I could make pj’s for the boys. I also ordered some Look & Learn prints to make last-minute lap blankets for the boys (an idea I came up with after they spent an afternoon playing with a table runner…). And I also bought some crushed velvetesque stuff to make myself a Christmas shirt. I would love to spend the time that I am waiting for the Verizon guy getting some of the necessary crafting off of my list, but that’s kind of hard if I’m still waiting for the supplies to get here. 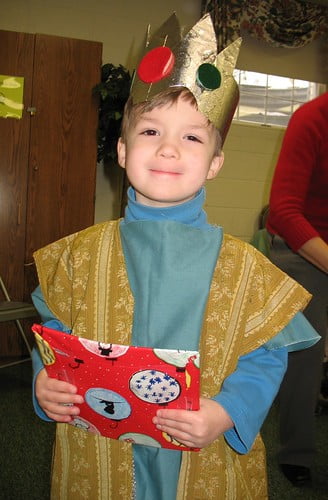 Ah, well. Advent is a season of waiting, isn’t it? Although, if I truly think that fabric and tv are what they meant, then my Catholic school teachers were falling down on the job all those years

Remember three days ago, when I observed there were 8 days left and I was cool as a cucumber? I’m a bit more stressed out at this point. That began when I spread out all of the things I’ve bought/made on the bed and discovered there were HUGE gaps I needed to fill. And I’m losing today to waiting. Luckily I’m done with the kids, aside from the two sewing projects I mentioned. It’s everyone else that’s causing me trouble. I may end up at my old standby, but even with that I’d better hurry!