But I found something cool and needed somewhere to post it

You can print your own photo cube here.   I think that’s pretty cool – I had wanted to do something similar for ages, using pictures on wooden blocks.  I know the boys would love to play with something like that.  But, I never got around to it.  This would be a lot less permanent and less sturdy, but so much easier to make.  And if they get messed up, you just print out another one!  (I found the link on How About Orange.) 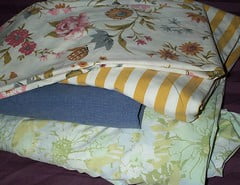 As long as I’m posting anyway, I might as well chat about my day. Son #2 and I spent the morning shopping.  One of the places we ended up was the Salvation Army store.  For the first time ever, I wandered into the back of the store where they keep the linens and I picked out some things that I thought I might be able to sew with.  I’m thinking more aprons, a few stuffed bunnies for the boys, and a skirt for me, but we’ll see what actually develops.

Tonight on a whim I took a pillowcase I’d bought last year and never used, and I cut it up and turned it into a tank top.  It’s not the most elegant bit of sewing in the world, and it doesn’t drape quite right, but I’m proud of it nonetheless.  I think it’s great for a first effort.  It’s a bit stiff, since I didn’t wash the pillowcase first.  I’ll take some pictures to share after I’ve laundered it and it’s (hopefully) softened up a bit.  If it looks decent, I may use that top pillowcase in the image to make another one.  That pillowcase is so soft and nice – I bet it drapes very flatteringly (if that’s a word…)

I rebaked the Ultralight pins I made yesterday, and they’re much sturdier today.  I sacrificed one of the pins and one of the rings to the testing gods and threw them forcefully onto several types of floors in my house.  Not a chip or a scratch on them.  I think they’re ok for selling

3 thoughts on “I wasn’t going to blog today…”